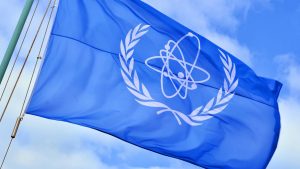 On February 9, 2021, Mahmoud Alavi, the Iranian regime’s Minister of Intelligence and Security, acknowledged in an unprecedented fashion that the mullahs are seeking to build nuclear weapons. Citing a decree issued by the regime’s Supreme Leader Ali Khamenei he said, “The fatwa forbids the production of nuclear weapons, but if they push Iran in those directions, it is not Iran’s fault. Those who pushed Iran in that direction will be to blame.”
So, let us have a deeper look into how the regime, despite reaping the benefits of the nuclear deal, never stopped its nuclear weapons initiative.

In July 2015, the Joint Comprehensive Plan of Action (JCPOA), known as the Iran nuclear deal, was signed between the Iranian regime and the P5+1, including the United States, France, United Kingdom, Russia, China, and Germany. The main goal of the JCPOA was to refrain the regime from obtaining nuclear weapons.
While the ratification of the JCPOA made a lot of noise, the regime’s approach in the agreement was suspicious after years of violating its obligations.
Alavi acknowledges that the regime is producing an atomic bomb despite regime officials denying the military aspects of its nuclear program since the Iranian Resistance exposed the Natanz enrichment and Arak heavy water sites in August 2002.
Years later, regime officials leaked facts about their JCPOA violations.
Head of Iran’s Atomic Energy Organization Ali Akbar Salehi revealed in January 2019 how the regime lied to the P5+1 about filling the Arak reactor pipes with cement.
On January 22, 2019, in an interview with the state-run TV in response to a question about filling the heart of Arak’s heavy water reactor with cement, Salehi said: “I thank you for your kindness towards our viewers. The Arak reactor has a large hole that you are seeing (pointing to a picture of the reactor in the program). People are standing around it. This hole has calandria tubes leading into it where the fuel passes through. We had purchased similar tubes, but I could not announce it at the time. Only one person in Iran knew about it, and we only reported to the state’s highest senior official [Khamenei]. No one else knew. Since our friends were in negotiations, we knew that the other party would go against their word one day. [Khamenei] had said to be careful and these people do not keep their word. So, we needed to carry out our measures with a certain awareness, meaning in addition to not severing any ties, we also needed to establish paths for a quick return if necessary. There were some tubes, with a diameter of two to three centimeters and three to four meters long. We had purchased the same number of similar tubes. They said fill those tubes with cement. And we did.”
The anchor asked Salehi if the IAEA instructed them to do so, and he answered: “No, during the nuclear negotiations. We said fine, we will pour them with cement. However, we never said we had other tubes because if we did [the P5+1] would say pour them with cement, too. And now we have these tubes. They filled the hole of the reactor with cement using photoshop, and they keep on saying they filled the reactor with cement. This is the photoshopped version of that image.”

Later in November 2019, Salehi acknowledged that while the regime accepted JCPOA articles, it had countermeasures to continue uranium enrichment.
On November 3, 2019, in an interview with state-run TV Saleih admitted that the Iranian regime cheated in nuclear negotiation with the P5+1 and the regime continued the enrichment of Uranium during and after the JCPOA. He said:
“There was an issue of Uranium enrichment in nuclear talks with the P5+1 countries, and they told us that the enrichment should be in that way, and we accepted. They thought that they won the negotiation. But, I could not explain this at that time, but we had a countermeasure, and while we proceeded with the case, they didn’t achieve what they planned for, and we did not become trapped in the enrichment deadlock. I don’t want to explain in more detail now, I haven’t seen anyone say this explicitly. So, when you enter negotiations, you may accept something, but you have countermeasures. But you can’t reveal your cards, and afterward, your opponent, who thought you were trapped, suddenly sees you are continuing your enrichment! How did it become possible?”

On May 8, 2019, the mullahs officially took their first step in violation of the JCPOA’s low-enriched uranium stockpile limitation.

The regime increased its low-enriched uranium stockpile to over 300 Kgs. In his interview with CNN on February 1st, Iranian regime foreign minister Mohammad Javad Zarif confirmed that the regime has reproduced 8,000 pounds, or 3,600 Kg, of low-enriched uranium. This is nearly half of the amount that the regime had before the JCPOA and enough for three bombs, according to the Arms Control Association (ACA).
“To manufacture one bomb, Iran would need to produce 1,050kg of 3.67% enriched uranium and would then need to further enrich that to 90% or more,” the ACA said. In November, the IAEA said Iran had 372kg of low-enriched uranium.
The International Atomic Energy Agency (IAEA) has also confirmed that Iran had installed and begun operating advanced centrifuges in an underground section at the Natanz site.
At the same time, the regime has also speeded up its ballistic missile program.
On February 8, the Bloomberg news agency quoted the United Nations saying that the clerical regime had received “sensitive parts” from North Korea for “its long-range missiles production project” and that “its last shipment dates back to 2020.”
On February 5, the Wall Street Journal wrote that IAEA inspectors had found traces of enriched uranium at two sites that the Iranian regime had long prevented from being inspected, which “could indicate Iran has undertaken work on nuclear weapons, based on where it was found.”
On February 10, the IAEA issued a report saying Iran has produced uranium metal at a facility in Isfahan, in further violation of the 2015 nuclear deal.
Uranium metal can be used as a component in nuclear weapons. Iran had signed under the JCPOA up to a 15-year ban on “producing or acquiring plutonium or uranium metals or their alloys”.
In a word, the regime has publicly accelerated its paces to obtain nuclear weapons.
All the parts of this puzzle clearly indicate that the JCPOA has failed to deny either Iran’s capability or means of obtaining nuclear weapons. The regime’s nuclear infrastructure had remained intact. Thus, everything was left at the regime’s mercy.
Second, it shows that even after the JCPOA, Iran had continued its clandestine nuclear program, such that it was able to resume 20% uranium enrichment immediately and other related activities.

Salehi revealed on January 5 that the regime produced high-enriched uranium (20 percent) within a mere 24 hours and the production is now stable.
The state-run Fars news agency quoted the spokesperson of Iran’s Atomic Energy Organization, Behruz Kamalvandi, that the regime has 17Kg of 20 percent enriched uranium.
The regime’s speaker of parliament Mohammad Bagher Qalibaf proudly stated that the regime can produce 17Kg of 20% enriched uranium per month.
On January 28 in a news conference, Qalibaf said: “While we were supposed to enrich 120Kg of 20% uranium a year, now we can enrich 17Kg of 20% uranium in less than a month. This means we are ahead of schedule. The installation of IR2m centrifuges is in progress, some installed and others in the process.”
Given Iran’s past failures to uphold its promises, no one can confidently trust the Iranian regime.
Through such posturing, Tehran is engaged in nuclear blackmail and seeks to extract more concessions from the new US administration.
The appropriate answer is not to panic or offer more concessions to the regime but to send a sharp and clear message that if it does not stop its provocations and fully abide by its commitments, the US and Europe will implement a firm policy vis-à-vis Tehran. The re-imposition of six UN Security Council resolutions, the complete halt to enrichment, and the closure of all nuclear sites, as well as anytime, anywhere inspections are indispensable to prevent the ruling theocracy from acquiring nuclear weapons.
Such an approach would certainly force the regime to retreat from making hollow threats. Any indication that Europe or the US might give in to the regime’s blackmail is a recipe for disaster.
Western policymakers should stop feeling compelled to treat Iran as if it is simultaneously victimized and at fault. All these issues are closely intertwined as aspects of the Iranian regime’s effort to use force projection as a safeguard for its grip on power.
Therefore, Tehran’s malign activities will persist in every area until it becomes clear that the consequence of that activity is complete economic and diplomatic isolation, and ultimately the collapse of the ruling system.