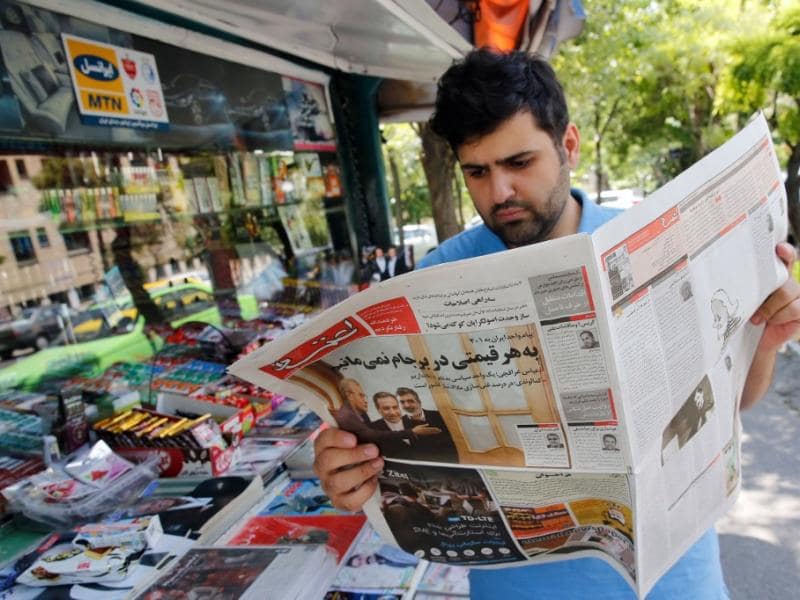 Iranian regime’s infighting has intensified due to the mullahs’ deadlock on international pressure and facing a restive society. All the while, Iran’s state-run media warn the regime’s authorities of their real enemy, the People’s Mojahedin Organization of Iran (PMOI/MEK).

“This hardliner faction, which claims to be the heir of the revolution, seemingly does not understand that their actions to have more power at whatever cost and by attacking other factions have created a huge gap in the system. They do not see how the enemy cunningly plots against the [regime] in this gap,” wrote the state-run Mostaghel daily on Tuesday.

Shortly after the new administration came to power in the United States 113 bipartisan members of the U.S. House of Representatives co-sponsored a resolution condemning the regime’s state-sponsored terrorism, systematic human rights violations, and supported a democratic Iran, as described in the ten-point plan presented by Mrs. Maryam Rajavi, the opposition’s president-elect. The resolution calls on the U.S. government to take a firm stance against the regime’s nuclear program and extortion campaign.

The piece in state-run Mostaghel newspaper reffered about this resolution and wrote:

“Don’t you see when you call for the expulsion of the [International Atomic Energy Agency] IAEA inspectors, the sworn enemy of the [regime], the MEK, were able to achieve a bipartisan resolution by 113 members of the new U.S. Congress. They are strategically exploiting it against the system. Have these hardliners read the resolution that shocks everyone? A resolution which supports the sinister strategy of regime change by the MEK and calls the MEK steps to strike at the Islamic Republic, ‘principled’ and helpful?”

“The group does not realize that with this resolution, the new U.S. Congress, less than a month after its inauguration, supports the 10-point plan [of Mrs. Rajavi] for the post-overthrow [of the regime] and even burns the [possibility to] maneuver with the phenomenon of ‘monarchy’ further highlighting the MEK’s role.”

The regime’s infighting entered a new phase when on February 4, a court in Belgium convicted Iran’s diplomat-terrorist, Assadollah Assadi, for his attempt to bomb the opposition rally in 2018 in France and assassinate Mrs. Rajavi. Assadi’s trial and conviction were historic since it was the first time that a diplomat on duty was prosecuted on charges of terrorism.

Now, different regime factions try to blame one another for this major blow to the regime’s terrorism machine.

“Why do they not see that in the gap created in this [infighting], the MEK completed the conspiracy in the court in Antwerp, Belgium? A conspiracy in which an international court sentenced an official and serving diplomat of the Islamic Republic to 20 years in prison for the first time on the false accusation of terrorism,” the Mostaghel article reads.

The article also highlights how Assadi’s conviction serves as a major blow to the appeasement policy and negotiations with the regime.

“That was a slight chance for the sanctions to be lifted. Now that opportunity is gone,” Mostaghel wrote in this regard.

Echoing the regime’s fear of the MEK and its Resistance Units’ role in leading the restive society toward overthrowing this regime, Mostaghel warns the rival factions of another uprising much larger than the ones in 2018 and November 2019.

“We see how the MEK has taken control of the social media, and by producing video clips, articles and documents daily encourages youths to [revolt] against the system. God knows what evil scheme they have for future riots [uprising]. Riots that, according to many security officials, will happen once again, and will not be comparable with the ones in January 2018 and November 2019.”

The article then warns rival factions of further infightings and tells them to “reflect on the fact that piercing a ship will plunge everyone into nothingness.”

Mostaghel underlines the MEK’s pledge to overthrow the regime for the past 40 years and exposing the reality of both factions of the regime and their crimes.

The article warns the rival factions to “look at dangerous realities on the ground,” and “if this trend continues,” the Iranian Resistance will achieve its goal of overthrowing the regime.

Previous articleIran: Fake News or Regime’s New Tactic on Its Nuclear Program
Next articleHolding Iran’s Regime To Account for Terrorism Is Long Overdue

In Iran, Layers of Crisis Hinder but Cannot Subdue People’s Push for Democracy