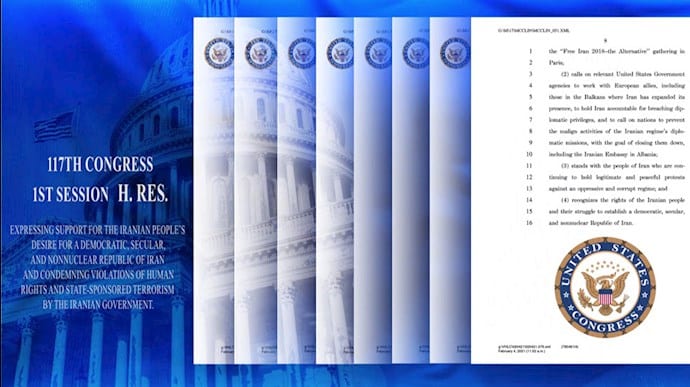 A bipartisan resolution co-signed by 113 members of the United States House of Representative, calling for a democratic, non-nuclear, and secular Iran, and condemning the regime’s state-sponsored terrorism, was announced on Thursday.

H. Res. 118 comes only a week after a court in Belgium condemned the Iranian regime’s incarcerated diplomat-terrorist, Assadollah Assadi, to 20 years in prison for his attempt to bomb the annual ‘Free Iran’ gathering held by the National Council of Resistance of Iran (NCRI) in Paris, in 2018.

This Resolution is co-sponsored by Rep. Tom McClintock (R-CA) and Rep. Brad Sherman (D-CA). Congressmen McClintock and Sherman notified President Biden and his administration of this resolution in a letter on Thursday. They underlined that the U.S. “must remain firm in holding the Iranian government accountable for its nuclear and other destabilizing activities in the region, such as, its support for terrorism, development of ballistic missiles, and human rights violations.”

“With the introduction of this resolution, a bipartisan coalition of members of Congress encourages all efforts to recognize the rights of the Iranian people and their struggle to establish a democratic, secular and non-nuclear republican of Iran while holding the ruling regime accountable for its destructive behavior,” read the letter in part.

This bipartisan resolution as a whole is clear and unequivocal support for the establishment of a democratic, secular, non-nuclear and republican Iran, on the one hand, and condemning the regime’s human rights abuses and state terrorism on the other. A quick glance at some of the H. Res. 118 provisions further confirms this message:

Thus, the resolution “condemns past and present Iranian state-sponsored terrorist attacks against United States citizens and officials, as well as Iranian dissidents, including the Iranian regime’s terror plot against the ‘Free Iran 2018–the Alternative’ gathering in Paris.”

It also “calls on relevant United States Government agencies to work with European allies, including those in the Balkans where Iran has expanded its presence, to hold Iran accountable for breaching diplomatic privileges, and to call on nations to prevent the malign activities of the Iranian regime’s diplomatic missions, with the goal of closing them down, including the Iranian Embassy in Albania”

The Resolution also “stands with the people of Iran who are continuing to hold legitimate and peaceful protests against an oppressive and corrupt regime; and recognizes the rights of the Iranian people and their struggle to establish a democratic, secular, and nonnuclear Republic of Iran.”

The full text of the resolution is below:

Previous articleIran News in Brief – February 13, 2021
Next articleTurning a Blind Eye To Iran’s Terrorism in Europe Will Bring More Terrorism To Europe