Iran: Khamenei and His Deadlock in the Farce Parliamentary Elections 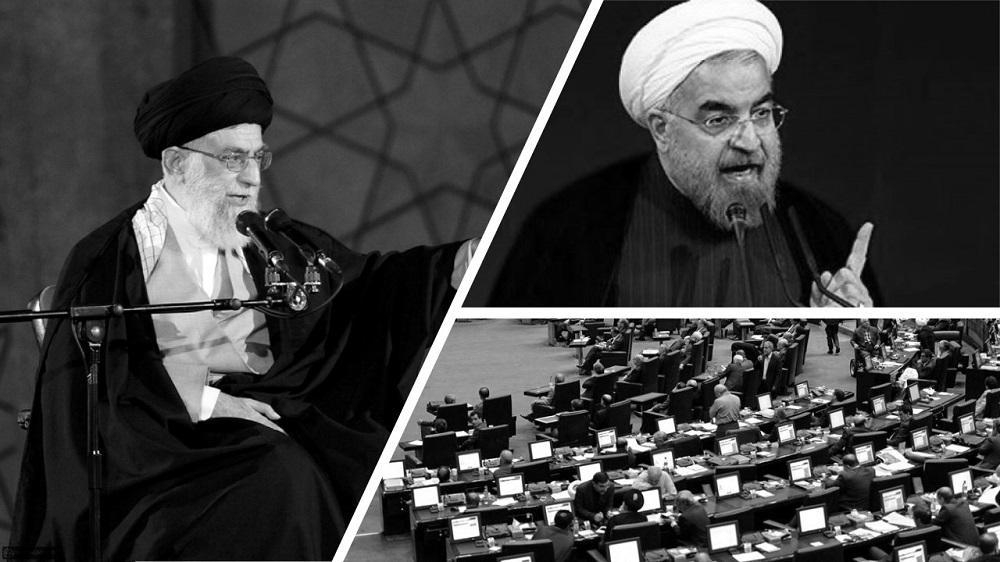 Being under tremendous pressure both in-home and abroad, the Iranian regime needs to hold its sham parliamentary elections on February 21, to portray a so-called “democratic” image. As the date closes in, fearing an unprecedented boycott, the regime’s officials continue pleading for people’s participation.

The massive disqualification of the members of the faction of the regime’s president, Hassan Rouhani, by the Guardian Council, which is directly under the control of supreme leader, Ali Khamenei, has caused Rouhani’s faction which has actively participated in all the regime’s crimes to question the elections.

Rouhani, on the one hand, called the regime’s elections “selections,” on the other hand pleaded with Iranian people to participate, since he needs legitimacy for the regime as much as Khamenei does.

On Friday, Ebrahim Raisi, the head of the regime’s judiciary, said in this regard: “Anyone who questions the elections is in the enemy’s front,” trying to minimize facts revealed during regime’s infightings that prove the corrupt processes and policies that underly the regime’s elections. Yet, Raisi’s remarks also expose the sensitivity of the current state of the elections for the regime.

On Thursday, Khamenei openly pleaded with the people to participate in the elections.

“Second, it shows the people’s strength,” Khamenei added, while also admitting that “there are problems in the country” and that “our failures have made problems for the people and they have some objections.” Yet, he expects the people to participate in the elections to show the “determination, power and vision of the people,” which in essence translates to “support for the regime.”

He shamelessly called the regime’s farce elections “the most honest elections in the world,” and begged for participation and said: “Some may not like me, but they should vote for the sake of the country’s prestige and security.”

Khamenei’s remarks were an unprecedented admission to the public abhorrence toward the entirety of the regime. The Iranian people have clearly shown their will of regime change in Iran during the nationwide Iran protests in November and January by chanting slogans like “Death to Khamenei,” “Khamenei, resign,” and “We don’t want the Islamic Republic.” Other anti-regime slogans that had been considered taboo and severely punished by the regime are now being openly chanted by protesters across Iran.

Therefore, on the domestic front, the regime is faced with an exacerbating existential crisis as the Iranian people advance in their quest for regime change. Therefore, Khamenei needs to put up a show of popular support, both to lift the dwindling spirits of his troops and also to prepare the ground for further oppressing people’s demonstrations, which are growing more numerous and crowded daily.

While Khamenei desperately tries to pull his regime together amid rising domestic crisis, he has to deal with the regime’s increasing international isolation. With the appeasement policy reaching its end, the regime is faced with increasing pressure on its illicit and warmongering activities, such as the development of ballistic and nuclear weapons, violent meddling in neighboring countries, and the funding of terrorism across the world.

The unprecedented sanctions on the regime, which have limited its funding of terrorism, have restricted the regime’s strategy of exporting terrorism and crisis abroad, which have for long defined the pillars of its existence.

The regime desperately tries to recruit European countries on its side to gather legitimacy in its confrontation with the international community, such as the recent fruitless visit of Josep Borrell, the European Union’s top diplomat to Tehran.

The regime’s traditional allies are finding it increasingly difficult to support this regime. for the supporters of the appeasement policy, siding with a regime that just recently killed 1,500 of its own citizens on the streets of Iran is proving to be very costly.

Khamenei said in his remarks: “The elections solve many of our international problems. The way international observers judge countries and decide to deal with them is very much dependent on these things.”

In other words, Khamenei and his regime need more than ever to run the elections and portray a democratic image of them, even though they and everyone else know that they are a travesty of democracy.

Why is the regime incapable of holding democratic elections?

While Khamenei desperately needs to go through the farce of the parliamentary elections, he can’t prevent the many problems that happen when his regime crosses paths with democracy. Elections have traditionally been a time of turmoil for the regime, widening rifts among ruling factions and setting the stage for nationwide protests. This happened in 2009, which led to the break of Khamenei’s hegemony over its forces.

Members of different regime factions see the elections as an opportunity to achieve a bigger share of the power and plunder the country’s resources.

In the meantime, the regime’s Guardian Council has carried out widespread disqualification of rivaling candidates, triggering disputes among officials, which in turn has resulted in the revelation of many facts about how elections are run in the regime.

Iranian regime MP Mahmoud Sadeghi, from Rouhani’s faction, revealed new aspects of bribery and collusion in the vetting process of Majlis candidates last week, tweeting: “In this round of elections middlemen have on some occasions demanded up to 40 billion rials (about $300,000) [to ensure the candidate is] approved. What a parliament it is going to be!”

The regime’s increasing infightings weaken the regime in its entirety, paving the way for more nationwide protests by the Iranian people to come. The Iranian people are willing to change a regime that has brought them nothing but war, chaos, poverty and social injustice. They have rejected any possibility of reform within the regime by chanting “Reformist, hardliner, the game is over” and their real vote is regime change.

In a nutshell, Khamenei is in a deadlock because he needs a democratic facade both for his domestic and foreign policies, while his regime has no capacity to adopt any democratic procedures.