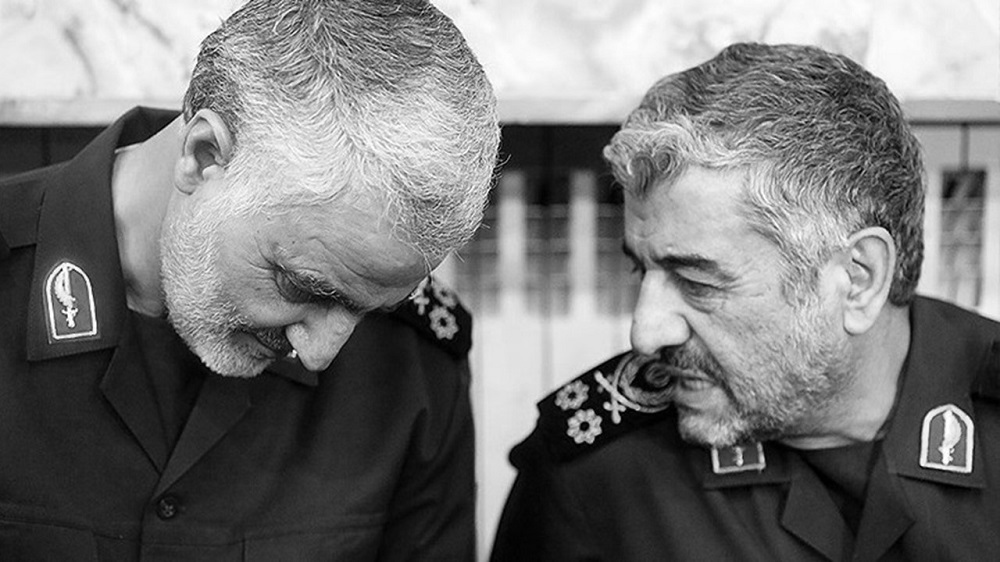 Written by Mahmoud Hakamian on 12 February 2020.

In an unprecedented admission on Sunday, Mohammad Ali Jafari, the former commander of the Iranian regime’s Revolutionary Guards (IRGC), said that Qassem Soleimani, the eliminated head of the IRGC Quds Force, was directly involved in the violent crackdown on Iran’s student protests in 1999 and nationwide protests in 2009.

He wrote on twitter: “During the 1999 and 2009 seditions, Haj Qassem was on the streets to fight the anti-revolutionaries and took effective measures to contain the insecurity and riots.” Jafari also added that Soleimani regularly stayed at the Sarallah Garrison, the main IRGC base in Tehran which is tasked with oppressing protests in the capital and maintaining the regime’s security. 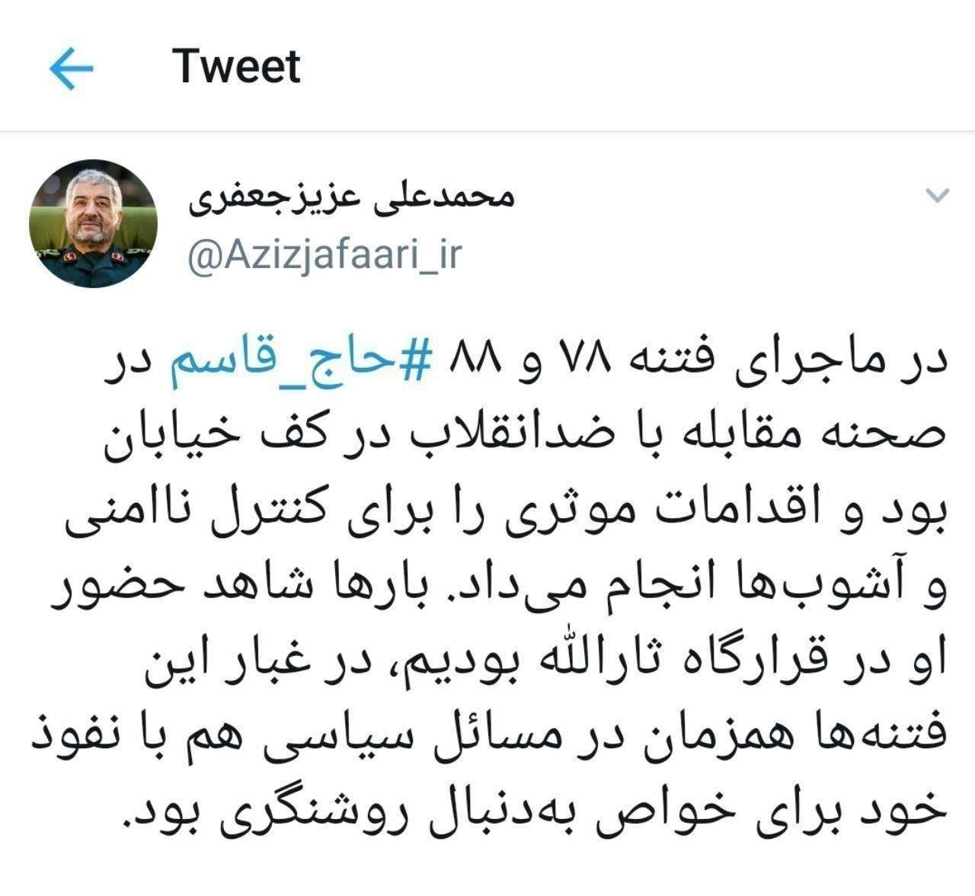 Jafari made these remarks, while since Soleimani was eliminated on January 3 by a U.S. drone strike, the regime has tried to portray him as a national hero, who only fought abroad to guarantee the Iranian people’s security and preserve national border; and that he was loved by the Iranian people. The failed carnival of Soleimani’s so-called “funeral” was in this line. However, his presence in Iraq and Syria was only meant to pursue and implement regime’s warmongering policies, and he was known as a war criminal who massacred and forcefully displaced millions of people in the Middle East.

Soleimani was the hatchet man of the regime’s supreme leader, Ali Khamenei. Soleimani played a key role in massacring the members of the People’s Mojahedin Organization of Iran (PMOI, Mujahedin-e Khalq or MEK) in Camp Ashraf and Camp Liberty in Iraq.

Before the second Gulf War in 2003, Soleimani orchestrated several attacks against MEK bases in Iraq.

In a failed attempt to whitewash Soleimani, after what Jaffari said, on Monday, Ramezan Sharif, the IRGC’s spokesperson, said: “The tweet is not correct. Haj Qassem had no responsibility or presence in the Sarallah Garrison.”

Fars News Agency, run by the IRGC, claimed that Jafari’s twitter account was fake and was not run by Jafari himself.

After Soleimani’s elimination, Iranians both inside and outside Iran celebrated. The people of Iraq and Syria, who had been oppressed by Soleimani and his thugs, celebrated his death. Videos on social media showed people distributing candies and sweets for his elimination and rejoicing in Syrian and Iraqi towns.

Beside his active support for the Syrian vicious dictator Bashar-al Assad and killing hundreds of thousands of people in Syria within the last nine years, Soleimani was also involved in the recent oppression of the Iraqi people’s uprising. Months before his death, Soleimani was fast busy suppressing protests in Iraq and dispatching snipers to shoot down demonstrators in Iraq’s streets

Jafari’s remarks about Soleimani’s role in suppressing people of Iran were made at a sensitive time for the regime. Tuesday marked the 40th day after Soleimani’s death. Shiite Muslims mourn for their dead on the third, seventh and 40th days of their passing. Tuesday was also the 41st anniversary of Iran’s 1979 revolution. The regime was trying to revere its eliminated terrorist commander on this occasion and use his death for more propaganda, and somehow tie a vicious criminal to the Iranian people’s revolution.

Previous articleLatest News in Brief- February 9, 2020
Next articleIran: Khamenei and His Deadlock in the Farce Parliamentary Elections