Still After 43 Years, “Down with the Dictator”

Iranians celebrate the anniversary of the overthrown monarchy with slogans of “Down with the dictator” and “Down with Khamenei”. On the eve of February 11, footage and reports have been sent from people in Tehran and Karaj shouting against the Iranian regime.

Slogans Against the Regime in Mashhad Hit Some Nerves The hacking of the Mashhad Bazaar audio system last night made waves on the Persian language internet. According to state-run Shahr Ara News, Hossein Davari, the governor of Mashhad announced: “Last night, in one of the porches of the Bazaar in Mashhad, a small audio device run by flash memory started to play norm-breaking slogans for a few seconds.”

Hossein Davari added: “This incident has upset the merchants and pilgrims and they immediately removed the device.”

Wednesday night, in the Mashhad Bazaar, the main shopping marketplace in the holy city of Mashhad, loudspeakers started to play slogans as follows: The Turkish National Security Agency (MIT) and the Istanbul Intelligence Service announced they have arrested 17 Iranian regime intelligence agents in Turkey who were trying to kidnap an Iranian dissident.

The White House last Friday held an interagency meeting to discuss the possibility of redesignating the Houthis as a foreign terrorist organization, two sources briefed on the issue told me.

The big picture: Less than a month after he assumed office, Biden rolled back the Trump administration’s designation of the Houthi rebels, arguing it hampered humanitarian assistance to the Yemeni people.

Air traffic operations returned to normal after standard safety procedures were carried out, the coalition said. The injured included travelers and workers of various nationalities, it said in two statements carried by state media. 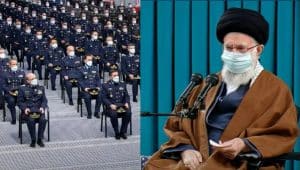 In a speech to the commanders of the Iranian regime’s air force, regime supreme leader Ali Khamenei complained about dictatorship and censorship in foreign media and online platforms and called for a multipronged attack strategy. Khamenei claimed that Iran’s regime has been targeted with a “multifaceted attack from the enemy,” adding, “We can’t be on the defense forever.”

Khamenei stressed that the regime must go on the offense in different areas, including “media, security, and economy,” and called on regime officials to lead efforts in this regard. In an interview with the state news agency ISNA on Wednesday, February 9, Reza Shervin, Head of Pediatric Medical Center in Tehran said: “Children under the age of 12 are the biggest group to visit the center as many children are infected with the virus.”

Meanwhile, according to the government website “24 Hours”, the head of the Abuzar Children’s Hospital in Ahvaz also announced that 270 children that contracted the Covid-19 virus had been hospitalized and that the hospital’s beds had been filled.

The widespread outbreak of Omicron among children comes as many of the country’s health experts have previously warned against reopening schools and universities, but the education minister in Raisi’s administration has insisted on reopening classes. During a phone call with the Saudi King bin Salman, United States President Joe Biden said he would never allow the Iranian regime to acquire a nuclear weapon.

The White House said in a statement that the two leaders discussed a wide range of issues, including threats from Iranian-backed groups in the region, attacks by Houthi militias on Saudi Arabia and other countries, and the Iranian regime’s nuclear program. According to a US statement, Joe Biden briefed King Salman on indirect US-Iranian talks in Vienna, Austria.