What Is the Message of Iran’s Recent Protests? 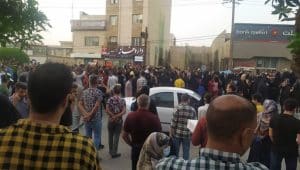 The past years have seen a significant increase in the number of protests taking place across Iran. Many observers and analysts have tried to look at these protest movements in isolation, targeted at separate economic woes such as unpaid wages, high inflation, low pensions, and lack of access to water for irrigation. However, the recent weeks have proven that today, more than ever, Iran’s people are aware that their multitude of problems is linked to the evil nature of the regime ruling their country. And they are making it clear in their slogans that their problems will only be solved when the mullahs’ rule is overthrown. On Monday, June 6, the Terrorist Financing Targeting Center (TFTC), affiliated with the U.S. Department of Treasury, sanctioned 16 individuals, entities, and groups affiliated with several terrorist individuals and entities in the Middle East.

The TFTC is a U.S. government body tasked with enhancing multilateral efforts among the U.S. and the Gulf countries, including Bahrain, Kuwait, Oman, Qatar, Saudi Arabia, and the United Arab Emirates (UAE), to counter regional money laundering and terrorist financing networks.