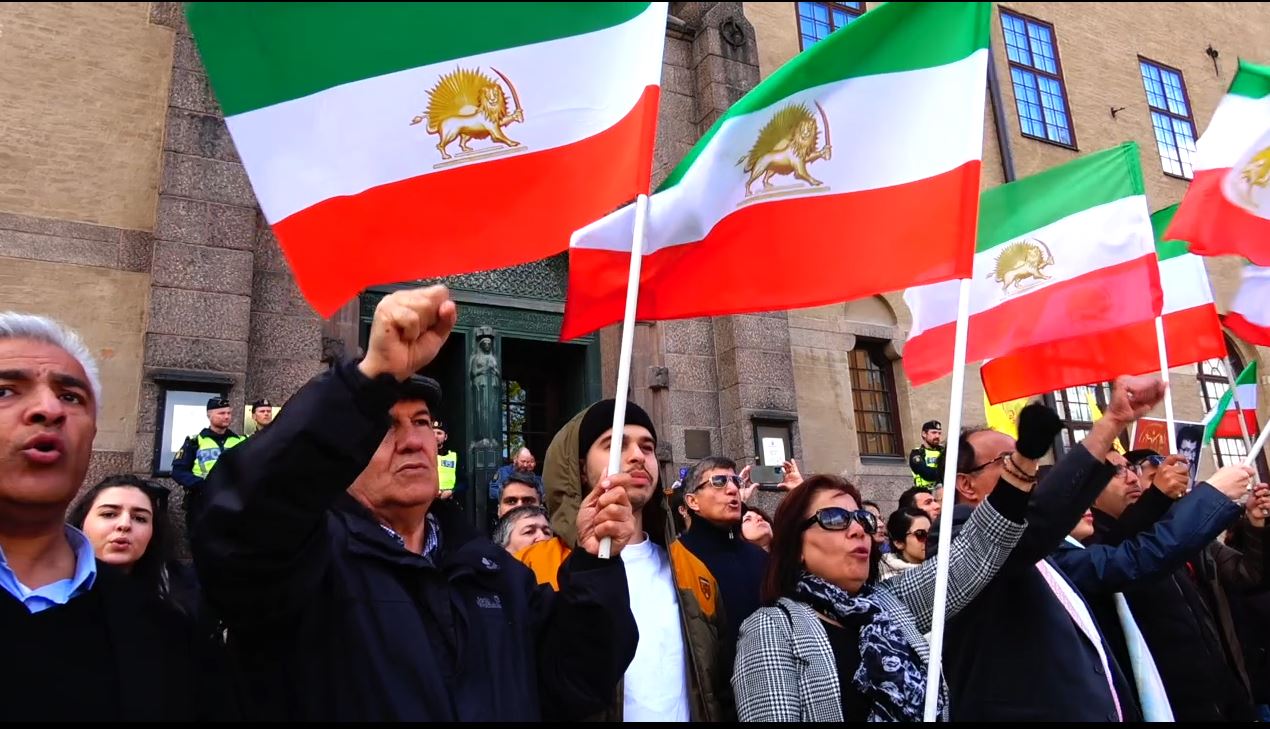 A large number of Iranians gathered outside a Stockholm courthouse this morning chanting slogans such as “Death to Raisi, Khamenei”, “Murderer”, “Mercenary of MOIS, get lost!”, “Mullahs’ embassy must be shut down”, “Mercenaries must be expelled”, and “1988 murderer, your trial is coming”. The gathering was in protest of an exhibition set up outside the Stockholm courthouse by the notorious Habilian Association, a branch of the Iranian regime’s Ministry of Intelligence (MOIS). Eleven MEK supporters were arrested for confronting the mercenaries of the MOIS outside the court where Hamid Noury was tried. They were released at 15:30, Stockholm time. One of the arrestees was injured in a confrontation with the mercenaries and was taken to the hospital by the police.

The three mercenaries and terrorists in charge of organizing the exhibition, arrived in three cars, panicked at the presence of the Iranians, and posted some of their placards and photos in defense of Hamid Noury and against the MEK at a street corner. The startled mercenaries, being protected by the police, packed up their show ahead of time and left.

The demonstrators once again called on the Swedish government to arrest, prosecute, and deport agents and mercenaries of the MOIS and the terrorist Quds Force, and to revoke their citizenship and passports, as their sole mission is to spy and facilitate terrorist acts. The security of refugees in Sweden requires such a measure.

The mullahs’ MOIS is extremely frustrated and furious with Iranian Resistance supporters and families of the 1988 massacred MEK members who have been demonstrating during Hamid Noury’s trial in Stockholm for the past nine months. The protesters have exposed the crimes of the regime, especially Raisi, the 1988 executioner. The cowardly plan to hold an exhibition outside the courthouse on Thursday, June 9, and Friday, June 10, by the Habilian Association, was a bid to support the criminal Hamid Noury by echoing nonsense defamation by the mullahs’ media against the MEK. Aware of the Iranians’ acute disgust with the regime and its mercenaries and criminals, the exhibition was kept secret in advance.

Yesterday (Wednesday, June 8), MEK supporters learned of the exhibition and called on responsible and freedom-loving Iranians to appear outside the court at 10:00 AM today, June 9, to echo the message of the 1988 massacre martyrs and the voice of the Iranian people.

Previous article
Wary of the Organized Resistance, State Officials Are Troubled With their Messaging
Next article
Iran News in Brief – June 10, 2022