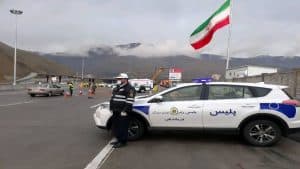 According to the head of the regime’s Emergency Organization, each year about 18,000 people lose their lives in traffic accidents in Iran.

Speaking at a ceremony, Jafar Miadfar said on June 13: “When discussing unexpected accidents, out of a total of 41 lethal accidents in the world, about 31 accounts occur in our country, including storms, floods, earthquakes, thunderstorms, while electricity and traffic accidents are among the most important of these events.”

He stated: “Annually, about 18,000 people, most of them between the ages of 15 and 40, die on the country roads, while the amount of damage in this sector is estimated at about $14 billion annually.” 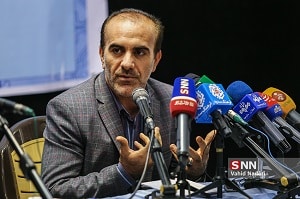 Mohammad Raiszadeh, the head of the regime’s Medical Council, acknowledged that Iranian doctors are fleeing the country by the thousands.

According to the state-run ISNA news agency, Raiszadeh said: “Both the appeals of other countries have become more attractive and the situation inside Iran has become more unfavorable than in previous years. Accordingly, the acceleration of migration, which was not unprecedented, has increased. Last year, over 4,027 people applied for a ‘good standing certificate’ or a ‘no medical malpractice verification’. In general, the acceleration of ‘good standing’ requests for immigration among physicians has increased.”

Criticizing the claims of some of the MPs, Raiszadeh added: “We have now about 15,000 to 20,000 general practitioners who are not doing medical work; why? Why are we short of 18,000 physicians in our medical centers? We have so many doctors who are not performing their professions or doing things that are not related to their expertise. If you really care, first hire the same doctors available in this network, and then start complaining about the shortage of physicians.” 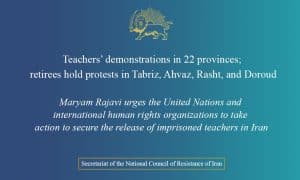 Teachers and education workers staged protest rallies in 22 provinces this morning, Thursday, June 16, to demand the release of imprisoned teachers and to protest the lack of ranking and standardization of their salaries in the face of spiraling inflation and overwhelming high prices.

Teachers Hold Protest in Many Cities Across Iran 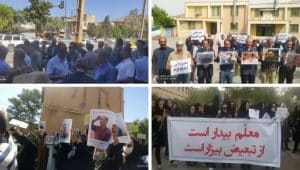 Teachers and educators came to the streets on Thursday, June 16, to hold rallies in protest of the regime’s education policies and the suppression of teachers’ rights activists. Protests were reported in Marivan, Bandar Abbas, Khorram Abad, Sharekord, Kashmar, Sari, Hamedan, Sanandaj, Karaj, Bukan, Saqqez, Andimeshk, and several other cities.

The protests were organized and declared by teachers’ rights organizations a week earlier. They are taking place today despite the regime resorting to severe security measures to prevent them. On Wednesday, security forces summoned and arrested dozens of teachers, activists, and organizers of demonstrations to intimidate protesters. But on Thursday, large rallies were reported in several cities. 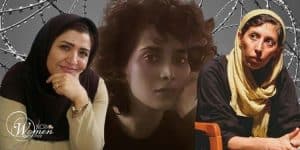 Uncertain conditions of 3 female political prisoners in Iran. The clerical regime in Iran has stepped up repression in recent months through waves of mass executions, arrests, torture of prisoners, and disrespectfully parading arrested young men in public. Female civil activists are among the main targets of the repression and arrests.

In the Qarchak Torture Chamber, Women Are Deprived of Water, Air, and Healthy Food The notorious Qarchak Prison is the only women-only prison in Iran and the detention center for at least 2,000 women. This prison was a disused industrial chicken farm. Initially, it did not have the standards for a prison. The lives and health of all prisoners are in danger in the Qarchak torture chamber in Varamin. “This is the end of the world,” In other words, it is a place of torture, exile, and murder of women.

Women prisoners in Qarchak are deprived of the three vital elements for every human being: water, air, and healthy food. The Qarchak torture chamber is used as an exile for political prisoners.

Iran’s Protesting People Are “No Longer Afraid of Anything” 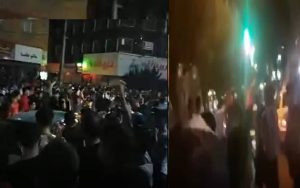 An expert of the Iranian regime on suppression of political opposition to the regime warns about the rising support for the opposition movement the People’s Mojahedin Organization of Iran (PMOI/MEK).

Mohamad Sadegh Koushki, a former integrator of political prisoners with close ties to the IRGC in an interview warned that the activities of MEK are focused on “psychological warfare” and “on creating despair among different sectors of the society.” 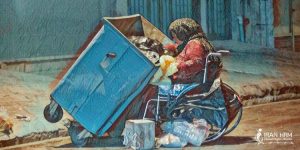 Disabled Iranians have turned to garbage scavenging and selling their wheelchairs to make ends meet in Iran.

In a June 9 report, the Roydad 24 website cited the problems and hardships of disabled Iranians; Problems that have increased unprecedentedly with the skyrocketing prices of various goods and services.

According to the report, a disabled woman identified by her first name as Moloud sold her five million toman wheelchair to pay the deposit of the house she wanted to rent in 2020. 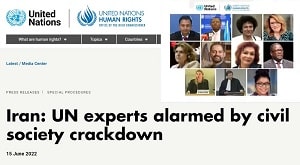 UN Special Rapporteurs expressed their grave concern over the violent crackdown on civil society in Iran, including trade unionists and teachers arrested for protesting against low wages and poor working conditions. They called on authorities to use excessive force through comprehensive investigations and Be audited independently.