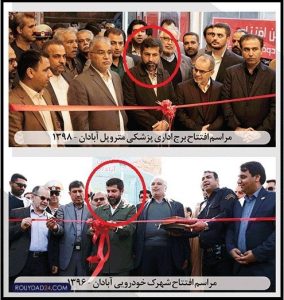 According to some sources from inside the regime in Iran, Gholamreza Shariati, the former governor of Khuzestan, fled the country on June 4 for the United Arab Emirates.

Shariati was widely accused as one of the enablers and loyal supporters of Hossein Abdolbaghi, the owner of the 10-story Metropol Complex in Abadan which was constructed against all industry standards and expert warnings and collapsed under the weight of its own walls on May 25, killing more than 40 people.

Over the past few days, videos of his speech at the opening ceremony of the collapsed Metropol building have been circulating on the internet. As one of the main supporters of this project as well as many other projects from the Abdolbaghi Holding in Khuzestan, he has become the embodiment of state corruption that is the root of people’s misery and suffering.

We Can Build Nuclear Weapons If We Intend to, Says Khamenei Confidant 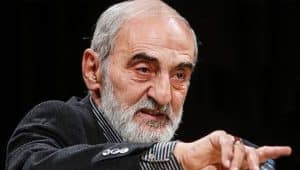 In an interview with the state-run Fars news agency on June 4, Hossein Shariatmadari, a confidant of the Supreme Leader and editor-in-chief of Kayhan newspaper revealed Khamenei’s mindset about the international inspections regime.

He said: “Because of the fatwa of the Supreme Leader, they (western intelligence agencies) are sure that Iran is not seeking to produce nuclear weapons. If it had such an intention, it would have easily produced nuclear weapons based on its nuclear knowledge, and the IAEA, the United States, and Europe would not be able to do a damn thing. Just as they have done so far despite their relentless efforts to stop the production of accurate ballistic missiles of our country.”

“Which state or government can you name that has the lowest level of understanding and intellect and provides all the military information of the country to its enemies?” Shariatmadari added in his interview. “As it was acknowledged by the Brookings Institution, the White House spokesman, and dozens of other US officials, the IAEA’s request to inspect some particular centers, is providing secret and sensitive military and security information for Mossad’s private sources as well as the CIA. It is expected that the esteemed officials of our country will blind the eyes of ‘Mossad’ and ‘CIA’ by preventing the entry of IAEA inspectors into sensitive military and security centers.” Today, according to the state-run Asr Ma website, a new body was discovered under the rubble of Abadan’s collapsed Metropolis twin towers. The body was exhumed near the site of the discovery of the previous two bodies. There are more bodies expected to be found at the site.

According to official statistics, at least 42 victims have been found dead so far following the collapse of the Metropol Complex in Abadan.

In light of the government’s failure to initiate a serious rescue operation, Iranians from several other cities joined their compatriots in Abadan to save trapped victims as well as unearth the bodies. Thousands of people in Khuzestan and other provinces protested against the clerical regime for at least 10 consecutive nights, chanting slogans of death to the Supreme Leader and his president. Now, after about 13 days, the work of removing debris and evacuating the victims’ bodies of this tragic incident is still not over.

Despite Ebbs and Flows, Iran’s Protests Will Only Escalate 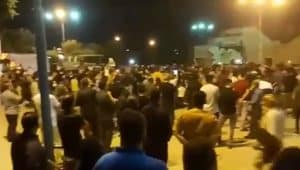 Recent protests in the city of Abadan, southwest Iran, erupted following the May 23 collapse of the 10-story Metropol tower that left at least 39 killed. The local protests, however, quickly spread to other cities and people in the streets began voicing slogans specifically targeting the regime in its entirety, calling for regime change. The regime’s IRGC terrorists seized two Greek oil tankers in the Persian Gulf on May 27, 2022. “The Revolutionary Guards Navy today (Friday) seized two Greek oil tankers for violations they have carried out in the waters of the Persian Gulf,” the IRGC said in a statement on Friday, shortly after Nour News — a website affiliated with the secretary of Iran’s Supreme National Security Council (SNSC), Ali Shamkhani — warned of “punitive action” against Athens due to the seizure. The statement gave no further details about the alleged violations. The Greek tankers were Delta Poseidon and Prudent Warrior and were seized near Asalouyeh off the coasts of Iran’s Bushehr Province and the Hendurabi island near Bandar Lengeh in Hormozgan province, respectively.

Many Buildings in Tehran in Danger of Collapse 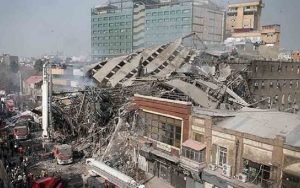 On May 23, the ten-story twin towers of Metropol in Abadan city in the southwestern province of Khuzestan suddenly collapsed. The tragedy has reportedly claimed the lives of at least 40 victims, and many more have sustained injuries.; however, the people continuing the rescue mission are pulling out more lifeless bodies from under the rubble. Locals have said that there are more than 50 people died.

On June 1, the semiofficial Eghtesad Online website stated, “From Plasco [building collapse in Tehran] to Metropol, compatriots wait for enlightenment,” showing the people’s outrage against the regime’s failures that have led to such catastrophes. A court in Iran has sentenced Azerbaijani Turkic minority rights activist Hojjat Esmatzadeh to 50 lashes and two years and six months in prison.

According to the verdict, issued in absentia by Branch 101 of the Criminal Court of Naghadeh, Hojjat Esmatzadeh was sentenced to 50 lashes and one year in prison for disturbing public order and 18 months in prison for publishing pictures on social media.

Hojjat Esmatzadeh was arrested on November 24, 2021, after being summoned to the Naghadeh Intelligence Office, and was transferred to Naghadeh Prison.