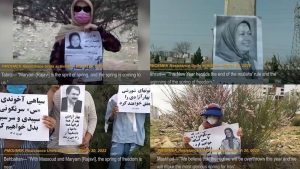 Today, March 25, a Baluch shepherd named Javid Sassouli was wounded by the Iranian regime’s IRGC in the city of Hirmand. The citizen has been reported to be in critical condition after being shot in the chest and is currently hospitalized in Zabul.

Residents of the Sassouli village protested in front of the checkpoint where the shooting took place, demanding that those responsible be tried. The station officials, as always, said they would take care of the issue themselves which sparked protests by locals.

We Are Running Out of Strategic Reserves, MP Warns 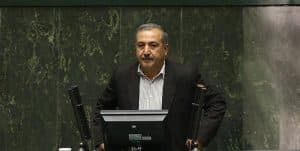 Jalal Mahmoudzadeh, a member of the Agricultural Committee at the Iranian regime’s parliament said: “The government has taken steps to eliminate the state preferred currency rate in a situation where we are facing shortages in the country’s strategic reserves, and the consequences of this elimination cannot be compensated. Not with a subsidy of 200,000 tomans, nor with 1 million tomans.”

He added: “Supply of corn, soybeans, and livestock were from Russia and Ukraine, and both countries are now at war and cannot meet our needs. Our strategic goods and reserves are not enough to meet the needs of the country. Despite all these problems, the government is pacing to eliminate the state preferred currency rate, and since our strategic reserves are running out, which we are unable to replace, due to the weaknesses in market management, we are going to face intense shortages coupled with a rise in prices of commodities such as oil, sugar, and rice in the new year.”

The United States Department of State’s Bureau of Democracy, Human Rights, and Labor condemned the Iranian regime’s proposed bill that allegedly claims to “protect internet users” but will actually further restrict the access of Iranians to the internet.

The US State Department tweeted on March 25: “Iran’s proposed bill to protect users aims to further limit Internet access, increasing censorship and restricting free speech online. We continue to urge the Iranian government to allow its citizens to exercise their right to freedom of expression and to freely access information.”

Iran’s proposed #UserProtectionBill aims to further limit Internet access, increasing censorship and restricting free speech online. We continue to urge the Iranian government to allow its citizens to exercise their right to freedom of expression and to freely access information.

In Iran People Are Still Being Charged for Walking on Beaches Despite a promise made by Hassan Darvishian a special representative to the presidential office on February 26, that by Nowruz the state will waive fees for entering the coasts, state media reported that people are still being charged money for just visiting the beach.

The IRGC-run news agency Javan reported on Thursday, March 24: “People believe that they should not be charged for seeing the sea and walking on the beach while they are not supposed to receive any services, and if the beach authorities charge people, it should be only for services such as using a pavilion or facilities on the beach. Exclusive images from Farahabad beach in Sari show that this complex receives an entrance fee of 10,000 Tomans from each car to enter the beach, even with a local license plate, and this cost is separate from costs such as using beach pavilions.”

Iran’s Economy Headed for a Tough Year, According To Official Stats 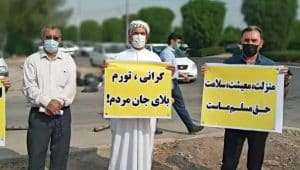 Iran’s inflation rate was at 40.2 percent at the end of the Persian calendar year 1400 (ending on March 20), according to the official figures published by the state-run Statistical Centre of Iran. The official rate of inflation for the previous year was 36.4 percent.

This is the third time that the regime is officially reporting the inflation rate to be above 40 percent, the previous occurrences being in 1995 and 2019. It is worth noting that the state-run bodies have a history of underreporting to downplay the regime’s disastrous handling of the economy. After many clashes between the Iranian regime’s Ministry of Intelligence and Security (MOIS) and its Revolutionary Guards (IRGC), the regime has finalized its decision to form a new organization called the “Command Corps for the Protection and Security of Nuclear Centers.”

Each of the regime’s security and military organizations accused their counterparts of showing weakness and negligence in dealing with the assaults against the regime’s nuclear facilities. Therefore, to end this debate and to close the security gaps, the regime decided to form a new organization, in the hope of preventing further attacks and acts of sabotage.

As Iranians mark the beginning of the new Persian calendar year and century, the mullahs’ regime has left very little for Iran’s people to celebrate and be joyful about. From skyrocketing prices and rising inflation to the growing number of executions and the persecution of protesters and dissidents, the regime has done everything to wipe off the smiles from the faces of Iranians and hopes from their hearts.

But in defiance of the suppression of the mullahs, members of the Resistance Units, the network of MEK inside Iran, are celebrating the new year and century by reiterating their commitment to overthrow the mullahs’ regime and establishing freedom in Iran.

Previous articleIran Regime’s Demand for IRGC Delisting May Be Chipping Away at Optimism for Nuclear Deal
Next articleNoury’s Trial: Shadi Sadr Testified About Iran Regime’s Attempts To Wipe Evidence of 1988 Massacre