Written by Hamideh Taati
8th May 2022

In the last couple of days, the counter-insurgency unit has been dispatched to the city of Izeh in the southern Khuzestan Province and clashes erupted when it faced the resistance of the locals. Security forces used tear gas to disperse a protest rally but a number of the security forces have been beaten by people in the streets.

A number of people who had taken to the streets were identified, and early the next morning, the Iranian regime’s agents arrested them. In Izeh, the repressive forces of the Basij and the IRGC in neighboring provinces were put on high alert and a number of them were stationed in schools and high schools to be ready to be dispatched. The execution of two prisoners in Qom was also carried out by the Iranian regime’s Judiciary on May 7. 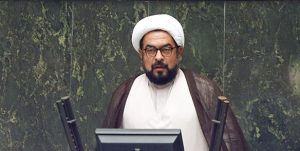 Soaring prices and record-high inflation that is threatening to cause a new wave of uprisings in Iran has cast a shadow on today’s parliament session.

During his speech in the regime’s parliament session today, MP Majid Naserinejad said: “Mr. Speaker, we really have a serious warning to the President. It’s regarding inflation. He promised to stop inflation. We were supposed to stop inflation. Did you want to stop the soaring prices this way? Some friends suggest we should better inform the people. There is no problem with information; people just can no longer bear these pressures. People are fed up. The issue is a security issue and it must be stopped.”

“Now the dust has taken the breath away from Khuzestan,” he added. “Officials are not seeing any way out of the situation. They don’t move, they’re asleep. People got sick, their lives are ruined, and no one is trying to find a solution.”

MP Admits to Public Outrage and Hatred of the Regime “What is left of this nation?” the MP Jalil Rahimi Jahanabadi asked during his speech at the parliament’s session today. ”These days, when you visit your constituency, do you hear anything else other than curses, insults, and desperate calls from people?”

He admitted: “Why are we fooling ourselves? Why are you forgetting the country’s problems? Our economy is based on systemic rent and mafia. No matter a reformist government or a principalist one, none of them can do anything here.” 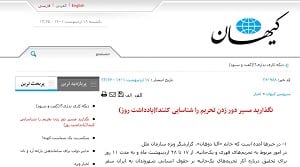 The Kayhan newspaper whose editorial guidelines are dictated by the Iranian regime’s Supreme Leader’s office called on the regime’s Judiciary to set conditions for liaising with the United Nations Special Rapporteur Prof. Alena Douhan.

“What is the purpose of this visit and what are the overt and covert goals?” Kayhan’s editor-in-chief Hossein Shariatmadari asks in his column. “Ms. Alena Douhan’s report, even if without mal-intent (which is unlikely), will have no effect on the sanctions process, and the UN will not feel obliged to consider it.”

Kayhan added: “Ms. Alena Dohan has previously submitted detailed reports to the UN on the impact of American and European sanctions on the people of Syria, Venezuela, etc., which have not had the slightest impact. Hence, isn’t the Rapporteur’s trip designed to assess the failure factors of the maximum pressure agenda and find the solutions needed by the United States and Europe to block the path of circumvention of sanctions, a recalibration if you will?”

Following a long list of grievances about sanctions on the regime and its allies, Kayhan calls on the regime’s Judiciary and demands: “Mr. Gharibabadi! First, ask the UN Secretary-General to address our questions, and if they have convincing answers (which they never will), then allow the Special Rapporteur to visit Iran. Otherwise, apologize and postpone her mission upon receiving formal answers to these questions. At the same time, our dear and noble brother, Mr. Mohseni Ejei, who is unique in his commitment and revolutionary nature, is also expected to act in this regard with the same firmness as always.”

Warning of grief consequences of the systemic price increase, an Iranian regime’s member of the parliament Mohammad Kaab Umayr tweeted on May 7: “Do something! Inflation over 100% is killing the people! The parliament is expecting the government to eliminate poverty not the poor!! With the wrong policies of some ministries, instead of eradicating poverty, the poor will be eradicated! Those prices that increased for basic items of the lower decile households are a serious challenge.” 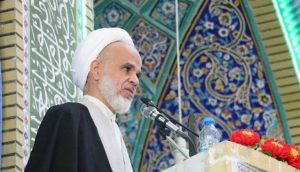 During his speech at the Friday prayer sermon, Ahmad Sheikh Baha’i, the Supreme Leader’s representative in Kerman said: “We are now engaged in a combined jihad and war; a war that is both on the military front and on the security front. It is also fought on the economic front and on the cultural front. It is also in the media where we fight beliefs and perceptions, and absent explanation or enlightenment, there are going to be many casualties!”

Trying to make sense of Khamenei’s line of  ‘Jihad of Clarification’, he tried to warn the regime’s loyal followers on how to spread disinformation and withstand public exposure of the regime’s atrocities on the internet.

“One of the things they do is to embellish the enemy,” Baha’i added. “They want you to believe that everything the enemy says is good, great, and beautiful. They want you to question why we are fighting this enemy anyway? Unaware that these enemies, who are dressed in beautiful clothes, once they advance and get the chance, they can do worse than ISIS.”

Iran Nears Another Flashpoint as the Price of Bread Increases

Iran: Alarming increase in price of bread, other foods

In his inauguration speech, Iranian regime President Ebrahim Raisi spoke of “developments” and his presidency will mean a “change in the status quo.”

Nine months into his tenure Iran is witnessing drastic economic crises, people’s livelihoods nosediving, millions plunging into poverty, and even bread is becoming a luxury these days. As impoverished breadwinners in Iran are struggling to fill their food baskets, Abbas Tabesh, the Deputy Minister of Industry, Trade, and Mine and the head of the Consumers and Producers Protection Organization, has declared a 200-percent increase in macaroni prices. Dubbed a controversial official, Tabesh had already filled media publications with his odd remarks and orders.

On April 13, Tabesh claimed that “any increase in the prices during the last month” should be corrected “tonight” and be returned to last year’s price. In his interview with the official state-run IRNA news agency on the same day, he gave another hollow promise, stating, “From April 21, the cost of 8,000 essential goods will be adjusted by an average of 40 percent compared to the previous prices.” Iranian political prisoner Leila Chegini could become paralyzed if Iranian authorities continue to refuse to deprive her of access to essential medicines prescribed by doctors. She has been detained in Nowshahr Prison in uncertain status.

She has been on hunger strike since April 27, 2022, to protest her lengthy uncertain status and the inhumane pressures and restrictions imposed on her.