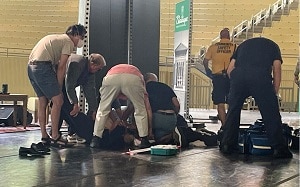 As the world focuses on the state of negotiations between world powers and the Iranian regime over the latter’s controversial nuclear [weapons] program, it is paramount to keep a close eye on the terror threats emanating from the ruling mullahs of Tehran and their entire terror machine apparatus.

The world was shocked last Friday over the news of the writer Salman Rushdie being stabbed in western New York state. The Iranian opposition coalition National Council of Resistance of Iran (NCRI), issued a statement strongly condemning the hideous attack. 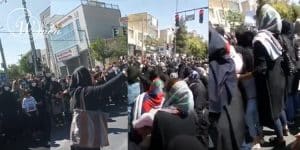 The people of Shahr-e Kord took to the streets today, Tuesday, 16 August 2022, to protest the lack of water in their city for more than a week in the heat of summer. People do not have access even to drinking water. The brave women of Shahr-e Kord were actively at the forefront of the protests.

The people and brave women of Shahr-e Kord marched to the office of the Governorate, chanting “death to Raisi” and “death to incompetent officials.” They cried out, “We are thirsty.”

On Tuesday, citizens in Shahrekord, in the southwest of Iran, took to the streets, protesting continuous water shortages. “Death to [president Ebrahim] Raisi” and “Death to the provincial governor [Gholam-Ali Heydari],” protesters chanted outside the Chahar Mahal & Bakhtiari provincial governorate.

“The brave people, esp. women, of Shahr-e Kord took to the streets to protest water cut-offs. Chanting ‘Death to Raisi’ and ‘we earn our rights only by taking to the streets,’ they confronted Iran regime’s repressive forces. I urge all compatriots to support them,” said Mrs. Maryam Rajavi, the President-elect of the Iranian opposition National Council of Resistance of Iran.

Freedom-Loving Iranians, and MEK Supporters Rally in Denmark Against Iran’s Regime, Calling for an End to the Appeasement Policy Toward the Mullahs

Denmark, August 13, 2022: Freedom-loving Iranians and supporters of the People’s Mojahedin Organization of Iran (PMOI/MEK)rallied in Copenhagen and Aarhus, against the mullahs’ regime ruling Iran.

August 16, 2022, Switzerland: Freedom-Loving Iranians and MEK Supporters Rally in Zurich, in Support of the Protests of Shahrekord People

August 16, 2022:MEK Supporters Rally in Zurich, in Support of the Protests of Shahrekord People.

Zurich, Switzerland, August 16, 2022: Freedom-loving Iranians, supporters of the People’s Mojahedin Organization of Iran (PMOI/MEK) held a rally in support of the protests of Shahrekord people, who are in the streets over severe water shortages.

Australia: Freedom-Loving Iranians and MEK Supporters Rally in Sydney Against the Mullahs’ Regime and Supported the Iranian Resistance

14 August 2022: MEK Supporters Rally in Sydney Against the Mullahs' Regime.

Previous articleEnraged People of Chaharmahal and Bakhtiari Province Protest in Shahrekord Against Water Cuts in the Cities
Next articleIran: Resistance Units Broadcast Anti-regime Slogans in Tehran