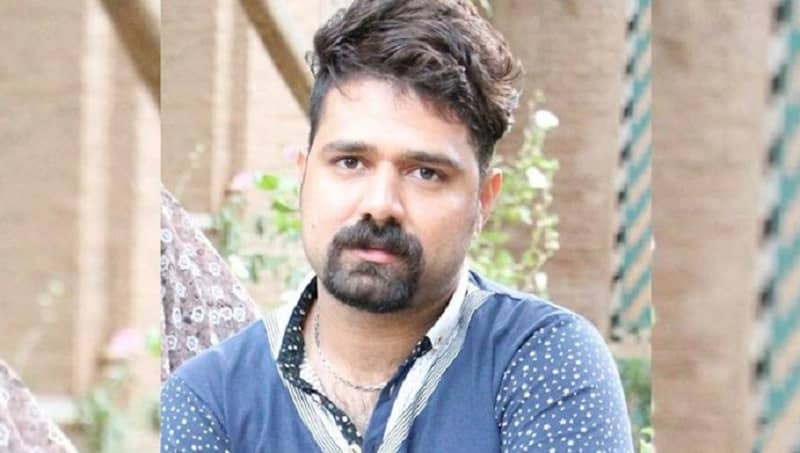 The death of Behnam Mahjoubi, an Iranian Dervish who had been in Evin prison, was confirmed by his loved ones on Sunday, February 21, 2021. The Iranian Resistance and groups of political prisoners called for the prosecution of regime leaders, including the Judiciary Chief Ebrahim Raisi, who was also involved in the mass murder of 30,000 political prisoners in 1988. 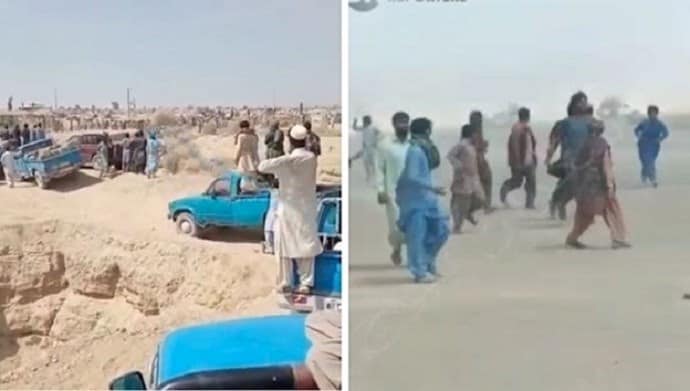 The porters held a protest rally and demanded the border crossing to be reopened. The IRGC forces responded by opening fire on them. 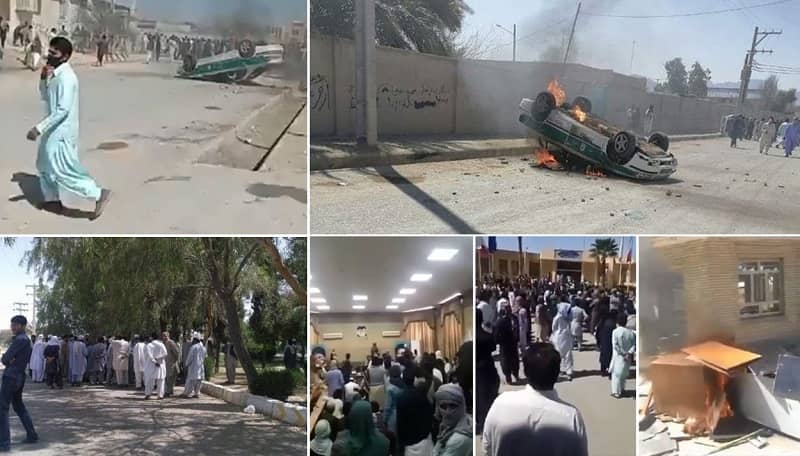 Subsequent to yesterday’s clashes between the deprived people of Saravan (southeast Iran) and the suppressive forces, which left dozens of fuel porters and young people in the city dead or wounded, this morning, February 23, the people in the city staged a protest. Despite the heavy presence of the IRGC, the security and police forces, the protesters reached the Governor’s Office.

The suppressive forces fired live rounds and tear gas to disperse the crowd, but were met with resistance by the enraged residents who took over the Governor’s Office. Reports say that many more people have been killed or wounded.

The rebellious youth overturned and set fire to several State Security Force vehicles. They also set tires on fire, blocking the highway leading to the local IRGC garrison. Clashes are continuing in different parts of the city and the situation is quite turbulent.

Mrs. Maryam Rajavi, the President-elect of the National Council of Resistance of Iran (NCRI), hailed those who lost their lives as martyrs to the cause of freedom and wished a speedy recovery for the wounded. In saluting the heroic people in Saravan for rising up against the oppression of the religious dictatorship, Mrs. Rajavi called on the rebellious youth, especially in Sistan and Baluchistan Province, to support the people of Saravan.

I call on the courageous youths of #Iran particularly in
Sistan and Baluchestan Province to rise up and support the people of Saravan. #IranProtests 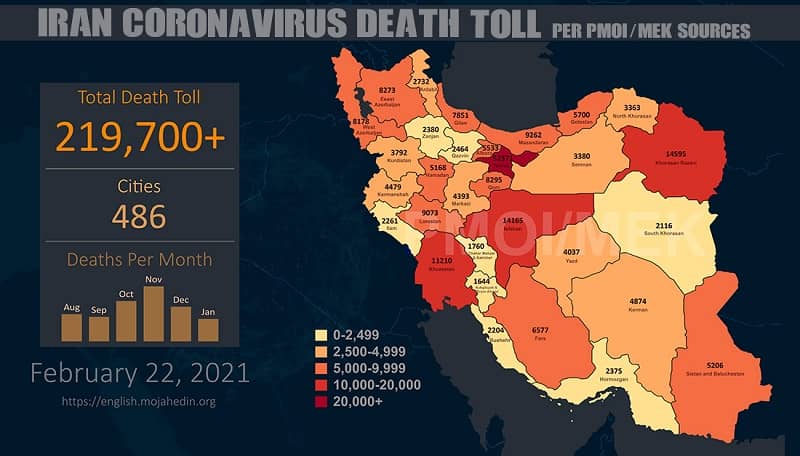 More than 219,700 people have died of the novel #coronavirus in 480 cities checkered across all of Iran's 31 provinces, according to the Iranian opposition PMOI/MEK.

Dozens of Baloch citizens killed or wounded in IRGC attack

Iran’s IRGC forces on Monday clashed with Baloch locals who carry fuel over the border region in Sistan and Baluchestan. Initial reports indicate that at least 8 people were killed and dozens were wounded and were taken to hospital.

Reports indicate that the IRGC has dug large holes in the zero points of the border to prevent the movement of Baloch locals who carry fuel over the border, and this has led to protests by the locals.

Fatemeh Mosanna returned to prison before completion of her treatment 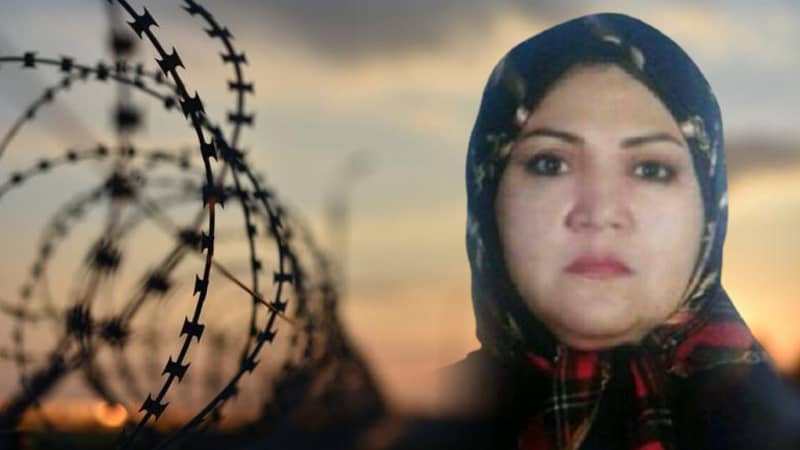 Political prisoner Fatemeh Mosanna has been returned to prison before completion of her medical treatment process.

In the wake of serious deterioration of her health, intestinal pain and bleeding, Fatemeh Mosanna was finally taken to a civic hospital on February 11, 2021. After five days, however, she was returned to prison without completing her treatment process. She is presently deprived of access to her regular medicines. 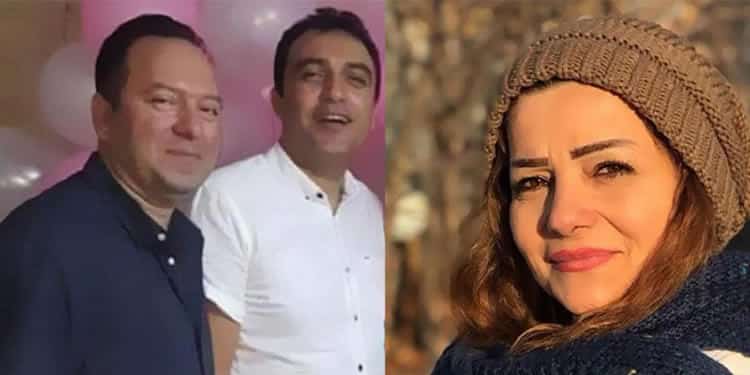 The 28th Branch of the Tehran Revolutionary Court sentenced three members of a Bahai family to a total of seven years of prison yesterday.

According to the Human Rights News Agency, the three Bahais were identified as Afsaneh Imami, her husband Saeed Naseri, and his brother Hamid Naseri.

The three Bahais were tried in absentia and their sentences have been confirmed.

Amnesty International is calling on Iran’s authorities to release Reza Khandan Mahabadi, Baktash Abtin and Keyvan Bajan, three writers and members of the Iranian Writers’ Association who are detained solely in connection with their writings and peaceful activities with the Association.

Amnesty International is calling on Iran's authorities to release Reza Khandan Mahabadi, Baktash Abtin and Keyvan Bajan, 3 writers & members of the Iranian Writers' Association who are detained solely in connection with their writings and peaceful activities with the Association. pic.twitter.com/TEJXsRpyFm

More than two weeks has passed since a Belgian court found the Iranian diplomat Assadollah Assadi guilty of plotting to commit terrorist murder by bombing the “Free Iran” gathering organised by the Iranian opposition, the National Council of Resistance of Iran (NCRI), on 30 June 2018 outside of Paris, writes Jim Higgins.

Assadi served as third counsellor at the Iranian embassy in Vienna until being arrested one day after the date of his planned attack. His arrest was preceded by that of two co-conspirators, an Iranian-Belgian couple, who had been found in possession of 500 grams of the explosive TATP while trying to cross from Belgium into France.

Iran: Early signs of another uprising

In the past three weeks, pensioners across Iran have been organizing protest rallies to demand their most basic rights. On Sunday, the event was marked by demonstrations in more than 20 cities and counties, including Tehran, Tabriz, Mashhad, Kermanshah, Isfahan, Arak, Ahvaz, Karaj, Qazvin, Rasht, Sari, Shushtar, Dezful, Haft Tappeh, Ardebil, Yazd, Neyshabur, Khorram Abad, Ilam, and Bojnurd.

The protesters were chanting, “Astronomical salaries [for government officials], misery for the public,” “We are fed of with this injustice,” “Our salaries are paid in rial, but we pay our expenses in dollars,” “Enough with the promises, our tables are empty,” “We will not back down until we get our rights,” “Enough with they tyranny, our tables are empty,” “The retirees fund has been hijacked by thieves,” and more.

Previous articleIranians Call on EU for a Firm Policy Towards the Iranian Regime
Next articleSaravan Uprising, No. 1 – People of Saravan Stage Uprising, Take Over the Governor’s Office