One Million Iranian Women Lose Jobs Because of Covid-19 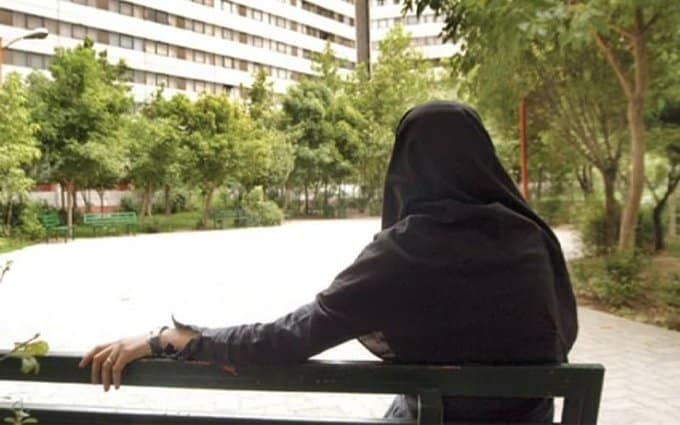 In the past eleven months, many Iranian breadwinners have lost their employment due to the coronavirus outbreak, which imposed additional pressure on low-income classes, particularly working families.

Up to 70 percent of the Iranians who lost their jobs during the pandemic were women, according to the Labor Ministry. Worse still, 62 percent of those employed in recent years don’t have insurance that would cover them for losing their job through no fault of their own and many are tied to contracts that prevent them from joining unions, so they are utterly alone when issues like this come up.

A woman writes "Death to Khamenei", the regime's Supreme Leader, on a public wall in #Iran.
Iranians blame their many problems, some life-threatening, including the lack of vaccines despite the #COVID19 pandemic, on Khamenei, Iran's unelected all-powerful "leader". pic.twitter.com/KqrLceFMB0 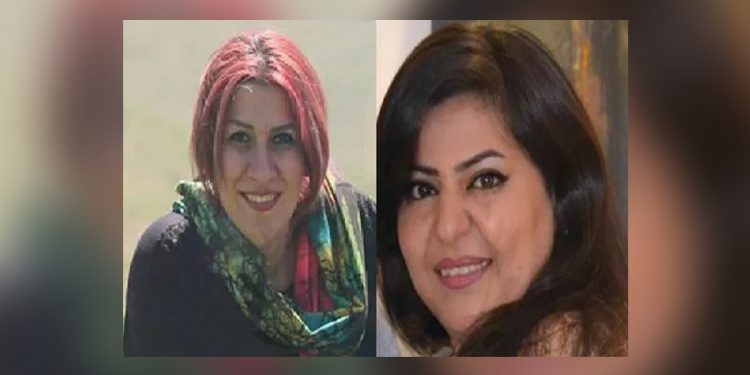 A Revolutionary court in Tehran sentenced two Bahai women to five years of prison each for following the outlawed faith yesterday.

According to the Human Rights News Agency, the two women, identified as Sofia Mobini and Negin Tadrisi, were arrested on October 26, 2017 during an occasion to mark the 200th birthday of Baháʼu’lláh, the founder of the Baha’i faith. They were transferred to Evin Prison but were later released on bail.

Maryam Rajavi: Khamenei’s ban on the purchase of Covid-19 vaccines is a crime against humanity

Khamenei’s ban on the purchase of #COVID19 vaccines is a crime against humanity. He is responsible for the deaths of thousands of our oppressed and deprived compatriots due to the #Coronavirus. #Iran pic.twitter.com/3xRfHGIogH 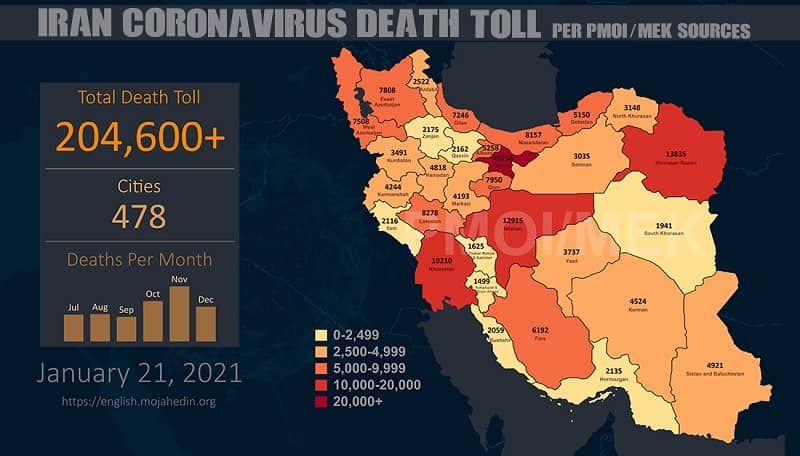 More than 204,600 people have died of the novel #coronavirus in 478 cities checkered across all of Iran's 31 provinces, according to the Iranian opposition PMOI/MEK. 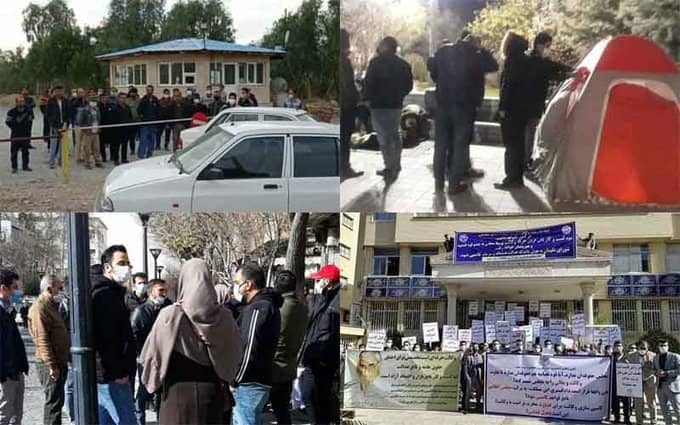 On January 20, Iranian citizens from different walks of life held at least four rallies and sit-ins in different cities, showing their wrath against the regime’s economic failures and mismanagement.

From several days ago, teachers affiliated with the Literacy Movement and preschool educators from different provinces traveled to Tehran and held a sit-in and rally in front of the Parliament (Majlis). They have camped in a park and announced that they would not leave the place before achieving their demands.

A prisoner was hanged yesterday in Iran

A prisoner identified as Abdulsattar Anshini was hanged today at the central prison in Zahedan, capital of #Iran’s Sistan & Baluchistan Province. He was arrested & sentenced to death for alleged murder 8 years ago.#StopExecutionsInIran pic.twitter.com/0Gsxyhtxp3 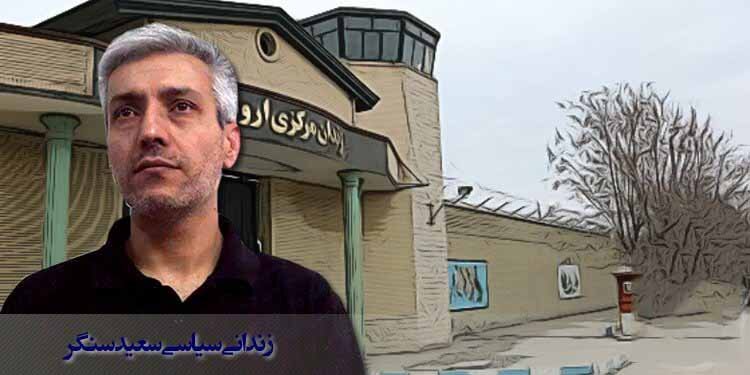 Another 11 months of imprisonment has been handed down for political prisoner Saeed Sangar who has already finished serving his 20-year sentence.

After various stages of fabricating a new case against political prisoner Saeed Sangar, another 11 months of imprisonment was handed down to him on Wednesday, January 20, 2021. He has already served over 20 years in various prisons in Iran.

Arrested Iranian agent in U.S. is the tip of the iceberg 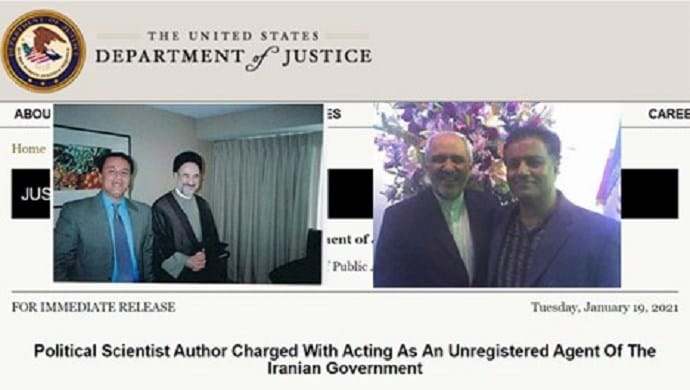 An Iranian regime agent who was posing as an independent political scientist in the U.S. was outed and arrested, according to a statement by the U.S. Justice Department on Tuesday.

“A criminal complaint was unsealed today in federal court in Brooklyn charging Kaveh Lotfolah Afrasiabi, also known as Lotfolah Kaveh Afrasiabi, with acting and conspiring to act as an unregistered agent of the Government of the Islamic Republic of Iran, in violation of the Foreign Agents Registration Act (FARA),” the statement reads in part.

Members of an all-women musical band in Kermanshah arrested, summoned 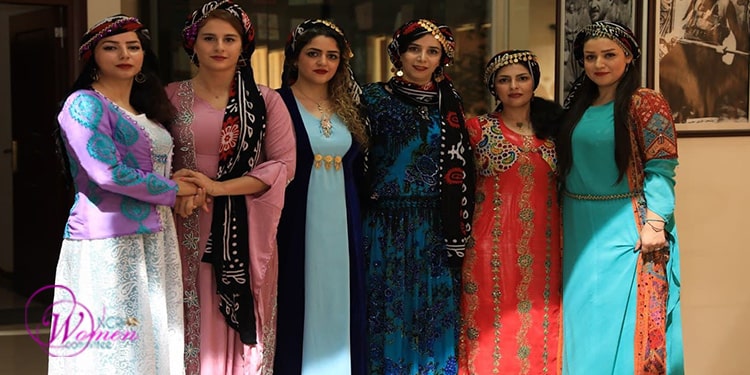 On Saturday, January 16, 2021, two members of Glaris all-women musical band were summoned to the Intelligence Police of the State Security Force of Kermanshah. Nazanin Atabaki and Nasrin Yazdanipour, solo singers of the musical band, were interrogated by the police. Subsequently, they were temporarily released on bail until their prosecution is finalized.

The state-run media published the news on Sunday, January 17, without mentioning the name of the all-women musical band and its arrested members. But they said that the two women had been detained for “abnormal” behavior.

Municipality authorities deploy child labors for cleaning around the city without giving them masks or gloves
The regime spends billions on billions on foreign warmongering & providing lavish lifestyles for its officials at the expense of children, #Iran's future. pic.twitter.com/hQtimaC28B

Previous articleProtests Continue Across Iran, Indicating Society’s Restiveness
Next articleIran: 33 Executions in Iran in the Past Month Alone