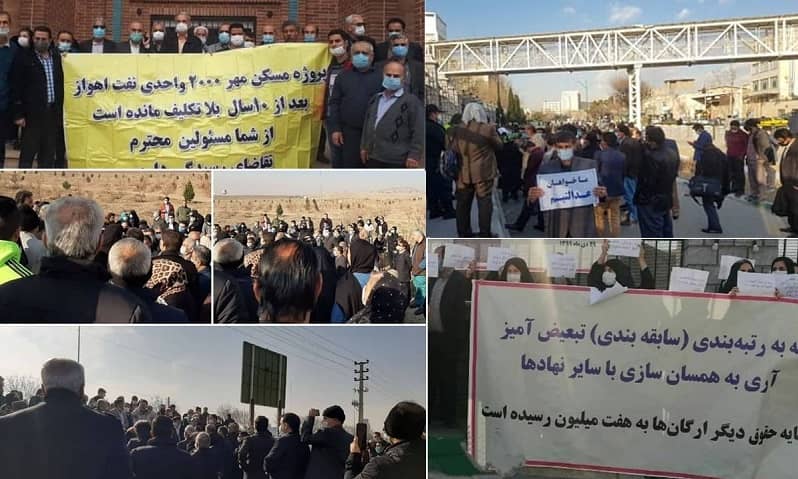 Reports obtained by the People’s Mojahedin Organization of Iran (PMOI/MEK) indicate there have been numerous protests across the country in recent days. These protests suggest the Iranian society is restive despite the coronavirus outbreak and the regime’s oppressive policies.

Tehran Stock Exchange’s (TSE) main index, TEDPIX, plummeted by more than 36,000 points on Monday. On Tuesday, the index further collapsed by 18,000 points in the opening hours, indicating the end of the TSE growth bubble.

Thousands of stock owners who have now lost their belongings poured onto the streets on Monday and Tuesday, chanting slogans against the authorities and their deceptive policies and held protests in front of the Securities and Exchange Organization (SEO) building in Tehran.

Following the two-day stock market crash, Hassan Ghalibaf, the chief of TSE and SEO, resigned, indicating the regime’s deadlock in solving the crisis.

Outraged plundered stock owners chanted slogans on Tuesday against the regime’s deceptive measures, some of these slogans include: “Death to [the regime’s president Hassan] Rouhani,” “Rouhani is stealing, and the police support him,” and “Forget about the nuclear deal Hassan [Rouhani], don’t steal from us.”

In addition, there were protests across Iran by other sectors of society.

On Monday, a group of workers at the Water and Wastewater Company (ABFA) in Kohgiluyeh and Boyer Ahmad province in southwest Iran gathered in front of the regime’s parliament in Tehran.

These deprived workers spread their empty tablecloths on the street, protesting their harsh living conditions and the regime’s refusal to answer their demands.

These workers have not received their paychecks, and their employment status in unclear. They also demand insurance premiums.

On Monday, January 18, a group of employees and retirees of the southern oil industry, who had signed up for the so-called “Mehr” housing project in Ahvaz, southwest Iran, held a gathering in front of the Khuzestan governorate. The participants protested the authorities’ delay in giving them their houses after 10 years.

On Monday, a group of school teachers held a rally in front of the regime’s parliament, protesting their unequal job status and salaries.

On January 18, farmers in eastern Isfahan held a rally in front of the governor’s office, and demanded their rights to have irrigation water.

These farmers, accompanied by their families, demanded fair access to the waters of the Zayandeh Rud river, which is the main source of farming irrigation in the province.

The regime’s destructive policies and projects have decreased farmers’ access to water. Farmers in eastern Isfahan held numerous protests within the last few years. They had also gathered on Saturday, holding signs and chanting slogans against the authorities’ inaction.

On Saturday, workers of Haft Tappeh Sugar Cane Company in Shush, southwest Iran, held a gathering protesting the regime’s inaction in holding the corrupt CEO of the company, Omid Assad Beigi, to account.

The Haft Tappeh workers have held many protests and strikes since 2019, against the so-called privatization of the company and their lack of job security and demanded their delayed paychecks.

On Thursday, January 14, the landowners in the Black Mountain area in the city of Robat Karim, southwest of Tehran province, held a protest rally to protest the illegal activities of the General Directorate of Natural Resources and the seizure of their lands and the regime’s illegal afforestation.

As protests continue across Iran, the regime’s state-run media and officials warn of a looming uprising and the regime’s ultimate downfall.

“The society’s outrage is slowly building up. And we can’t predict what will happen when this hatred explodes. But what we know for sure is that this piled-up hatred will one day explode and can turn into a massive blow [to the regime],” wrote the state-run Ebtekar daily on Tuesday.