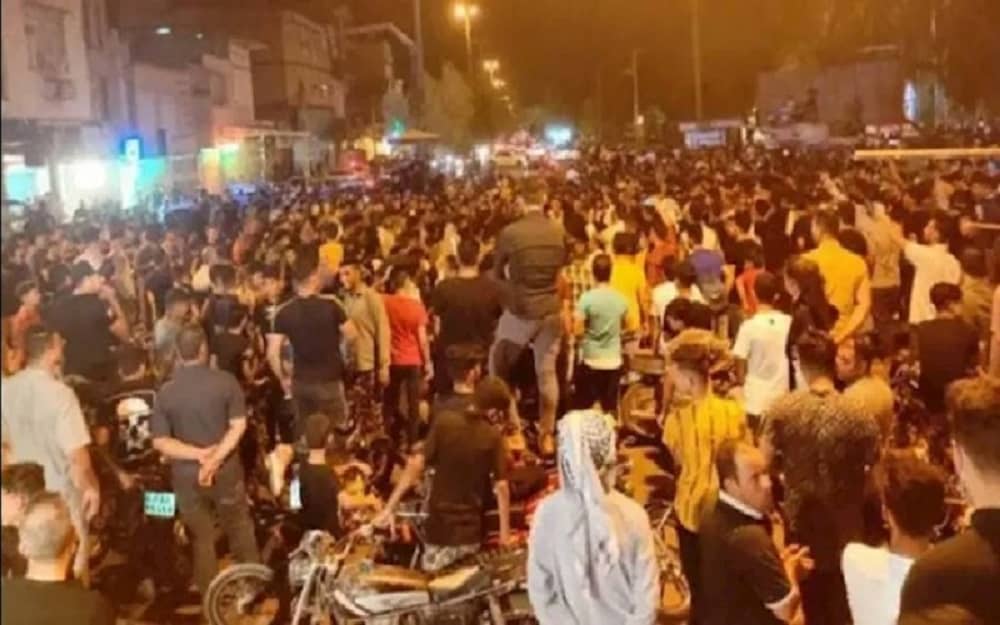 Despite The Killing, The Movement Lives On

Just as every other time, when people stood up and cried for freedom, justice and the right to live with dignity, the regime tried to brutally crack down and kill dissent. But after four decades of plundering and massacre, the majority of the Iranian people have already lost everything they could build their lives upon. With their backs on the wall, there’s no way other than forward.

July 20 – Khuzestan province, southwest #Iran
Major turnout for traditional ceremonies during the burial of three protesters killed by regime security forces during recent protests over water shortages across this province.#IranProtests#خوزستان_تنها_نیستpic.twitter.com/cKsvsb4LZb

While officials in the highest echelons in Tehran are trying to find a way on how to address the uprising in the South, people throughout the country continue to flood the streets and raise their voices to protest and demand their rights.

#IranProtests
Isfahan—on the 31st consecutive day of the nationwide strike, project workers in Fouladshahr marched venting their anger over officials' indifference toward their dilemmas.pic.twitter.com/TNfeVAOYT3

Jul 20- Tabas, NE #Iran
Livestock farmers gathered, pouring milk on the ground, to protest the regime's corruption, erroneous policies & mismanagement which has driven them into bankruptcy.
They say the government's subsidies are coming out of their income. #IranProtests pic.twitter.com/zgYM5CUykq

Jul. 20 – Gonabad, NE #Iran
Shop owners/bazaar merchants gathered to protest the closure of the bazaar. They want the bazaar to be open 3 hours in the morning and 3 hours in the afternoon. The COVID-19 Headquarters said the bazaar can only be open from 8am-1pm. #IranProtests pic.twitter.com/evB0hvYzyq

Death to the Islamic Republic, People Chanted In Tehran Today

This morning, a crowd waiting in the Tehran metro, mainly containing young women, used the opportunity to express their anger and frustration about the corrupt system that starves the population and oppresses the cries for justice.

People chanting:
"Down to the [mullahs' regime] principle!"
"Death to the Islamic Republic!"#IranProtestspic.twitter.com/rdqmpfPSAK 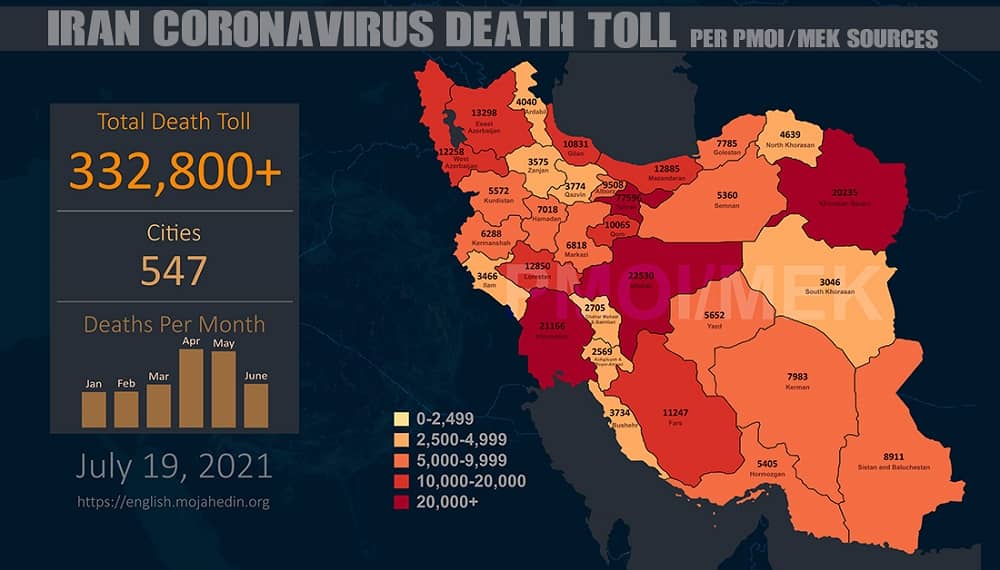 Over 332,800 people have died of the novel coronavirus in 547 cities checkered across all of Iran’s 31 provinces, according to reports tallied by the Iranian opposition People’s Mojahedin Organization of Iran (PMOI/MEK) as of Monday afternoon local time, July 19. The official death toll declared by the regime stands at 87,374, around a fourth of the actual figure.

More than 332,800 people have died of the novel #coronavirus in 547 cities checkered across all of Iran's 31 provinces, according to the Iranian opposition PMOI/MEK. 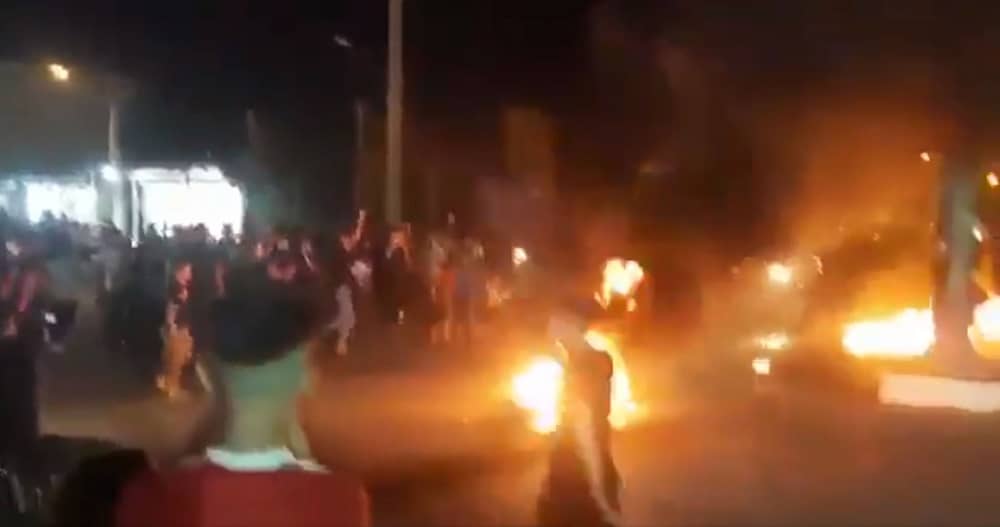 Defiant youth in Khorramabad launch solidarity demonstration with Khuzestan uprising
On the evening of Monday, July 19, the people of Khuzestan’s uprising against the clerical regime continued despite the regime’s severe repressive measures and deployment of reinforcements for the fifth consecutive night running. Thousands of brave youths of Khuzestan took to the streets in Kuy-Alavi and Shelangabad regions of Ahvaz, Hamidiyeh, Veys, Kut-Abdollah, Susangerd, and Shooshtar to protest against severe water shortages.
Read more

Poverty, inflation, unemployment, disease, water shortages, and power cutoffs are the clerical regime’s only gifts to the people of #Iran. Freedom & justice can be realized just by overthrowing the clerical regime and the establishment of democracy and popular sovereignty. 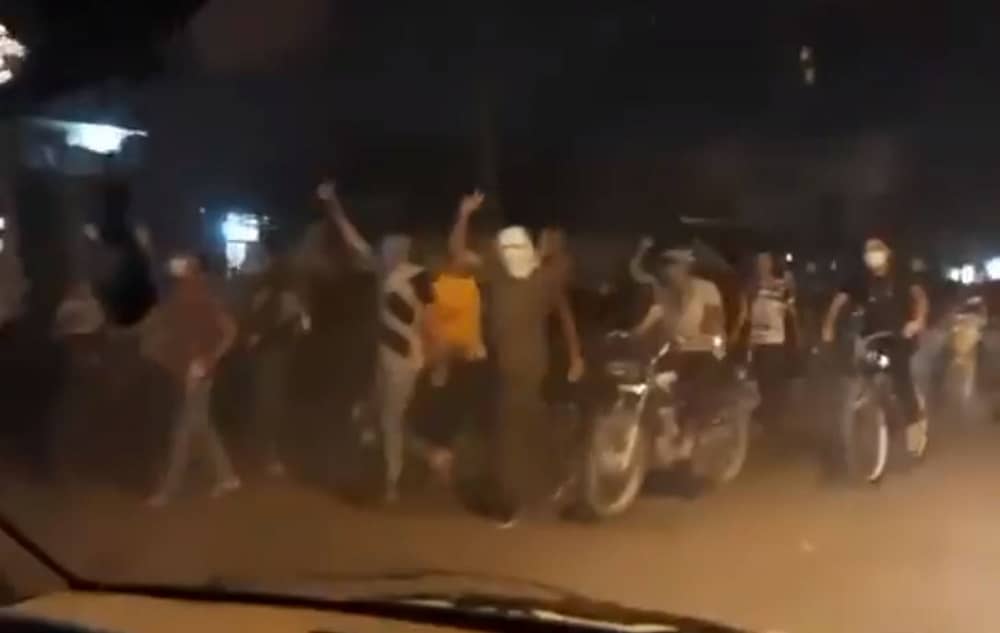 On Sunday night, the people of Iran’s Khuzestan province returned to the streets to resume their protests over severe shortages of water during the hot summer season. Protests were reported in the cities of Ahvaz, Susangerd, Kut Abdollah, Shush, Karkheh, Jofeir, Abdulkhan, Seyyed Abbas, Shaver and many others. Protesters chanted anti-regime slogans and blocked roads. Instead of solving the water crisis, which is endangering all life in the province, the regime has dispatched security forces to quell the protests. Security forces opened fire on protesters killing and injuring several people. The identity of three victims has so far been confirmed, including a 17-year-old boy, but the casualties are likely to be higher.

Iranian Arabs gathered in several cities in Iran’s Khuzestan province for the fourth night on July 19. Protesters in at least 17 cities have taken to the streets in the past 4 days. Large numbers of anti-riot police were dispatched to the restive cities in southwestern Iran to quell the protests. Riot police used extreme force, sometimes lethal, to crack down on protesters who only demanded water. Gunshots were heard in several videos. 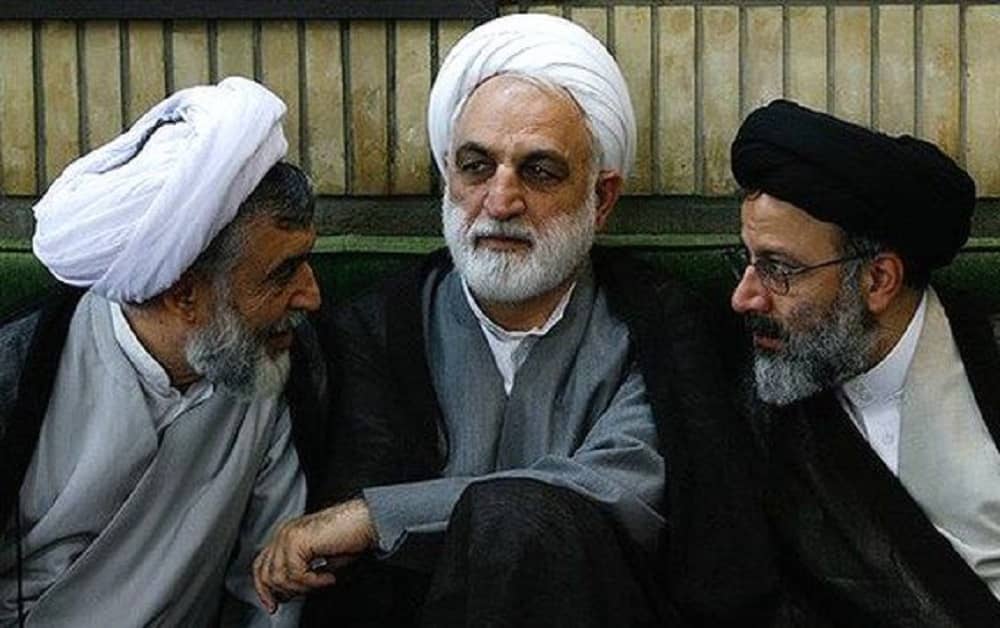 Iran’s supreme leader Ali Khamenei last year decided to contract his government and started slowly to eliminate the figures of the so-called reformist faction in the hope of strengthening its government and being able to face upcoming protests and as well external crises. The final bullet of this decision was the appointment of Ebrahim Raisi as the regime’s president, not least because the overwhelming majority of the people of Iran boycotted the presidential election. Along with this contraction, Khamenei appointed the infamous and cruel Gholam-Hossein Mohseni-Eje’I as the chief of the judiciary, replacing Ebrahim Raisi. It seems that the execution machine of this regime has started its work again so that the regime executed 12 persons last week. 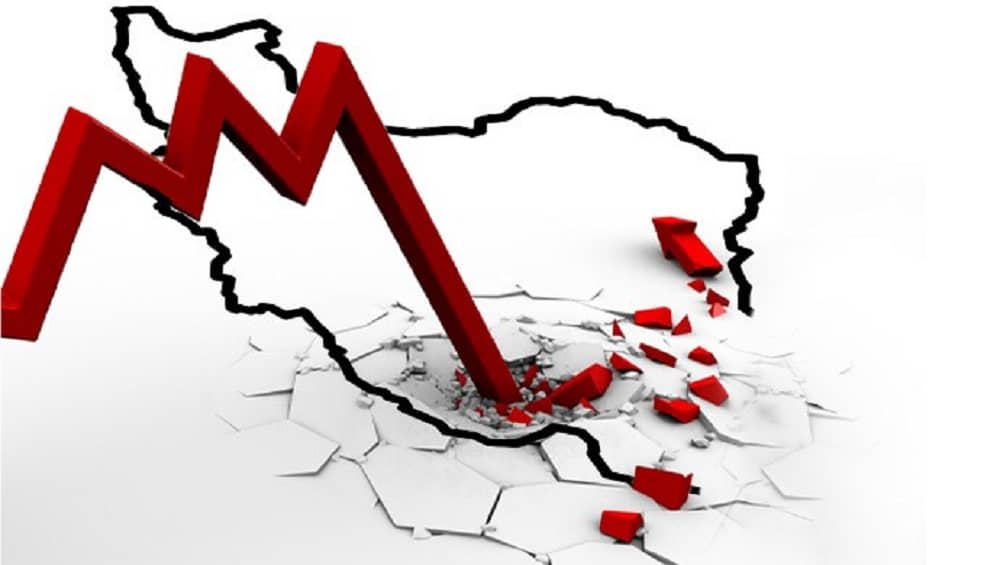 Iran’s economy is grappling with several crises due to structural corruption. Crises rendering negative growth, inflation, and high prices, shrinking people’s purchasing power while pushing at least 60 million Iranians across the country further into poverty and misery. A part of this critical situation can be seen in farmers’ and ranchers’ protests over severe water shortages and the high cost and shortage of livestock feed. 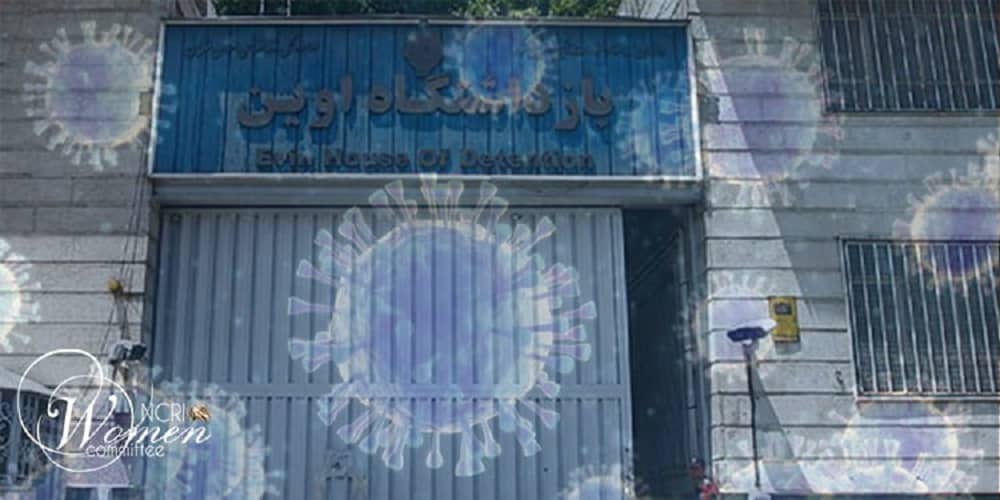 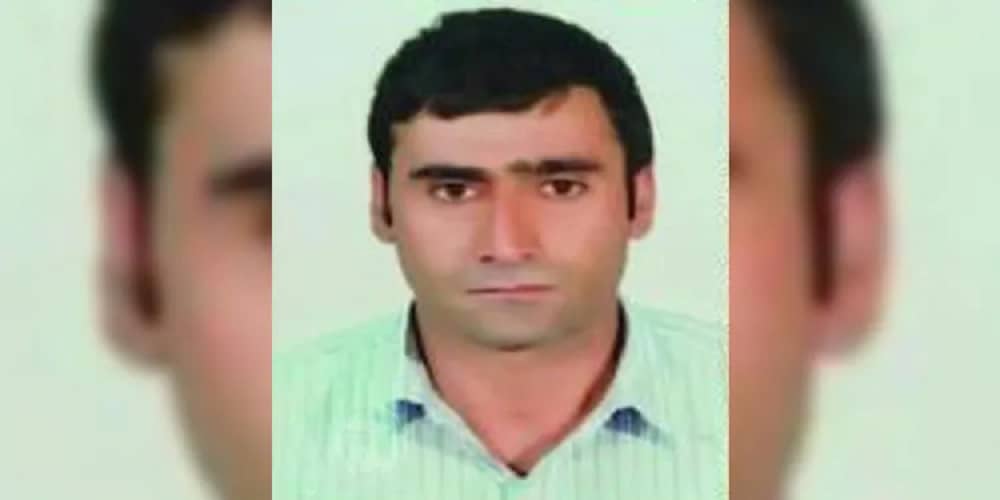 An Iranian Kurd was killed under torture on July 16 in Urmia’s Intelligence Office Detention Center. According to the report by the Hengaw Organization, the man was identified as 38-year-old Rahman Ahmadian. Rahman and other citizens including his neighbor were detained by Intelligence agents on July 13. A close friend of Rahman said that the Intelligence agents called the Ahmadian family on Sunday, July 18, and told them to come to take Rahman’s body from the detention center. The agents told Rahman’s family that he had hanged himself in the detention center.

Iran: The EU Must Apply Magnitsky Act For Ebrahim Raisi’s Role In The 1988 Massacre