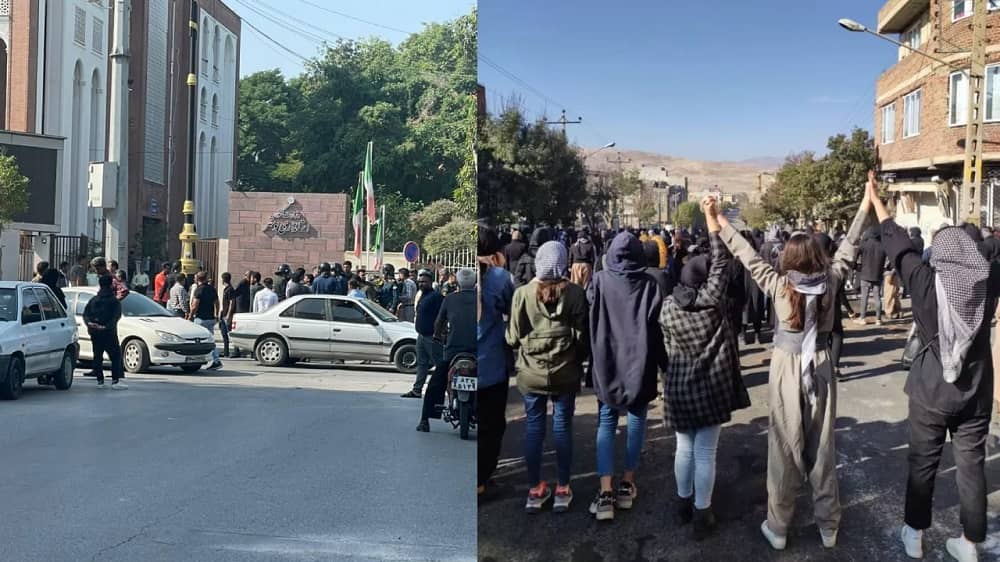 Iran Uprising at a Glance – Day 69

As university and school protests as well as bazaar strikes continued in Iran, and as nightly protests in dozens of neighborhoods are expected again, there is talk of a protest mobilization in support of the people of Kurdistan during the next three days on Thursday, Friday, and Saturday. According to reports from Tehran, there were protests in at least 11 different locations in the capital Tehran, including in the Moshiriyeh district, as well in Zahedan, and Qom. Throughout Wednesday, Tehran’s bazaar was the scene of a continuing strike and protests.

November 23 – Dehdasht, southwest #Iran
Locals are continuing the nationwide protests against the regime on the 69th night of the uprising and confronting the regime's security forces.#IranRevolution2022#مرگ_بر_ستمگر_چه_شاه_باشه_چه_رهبرpic.twitter.com/wqCJHZInvU

A new feature of the uprising is an escalation in Molotov Cocktail attacks on regime centers of suppression in major cities such as Mashhad, Hamedan, Tehran, Qom, among others. The centers targeted are used to concentrate regime forces and launch attacks on protesters and are used as logistics bases and sometimes as temporary detention centers by security forces.

November 22 – Mashhad, northeast #Iran
Protesters threw Molotov cocktails at a regime-associated building to voice their solidarity with their compatriots in the country's Kurdish areas.#IranRevolution2022#كردستان_تنها_نیست pic.twitter.com/pccLetLwvM

On Wednesday morning, merchants and storeowners in many cities continued their general strike. Strikes were reported in the cities of Javanrud, Piranshahr, Bukan, Kamyaran, Urmia, Saqqez, Oshnavieh, and Salas-e Babajani, among others. Professors and students at Kurdistan University continued their boycott of classes today and condemned the regime’s lethal crackdown against Kurdish cities.

November 23 – Dizaj, near Urmia, northwest #Iran
Locals are on strike and continuing the nationwide protests against the regime on the 69th day of the uprising.#IranRevolution2022#اعتصابات_سراسری pic.twitter.com/jKTTYGgKgM

November 24 – Ahvaz, southwest #Iran
Locals are on strike and continuing the nationwide protests against the regime on the 69th day of the uprising.#IranRevolution2022#اعتصابات_سراسریpic.twitter.com/3vqwGbTDGx

Students of Amir Kabir University in Tehran boycotted their classes and protested the arrest of a large number of their classmates by the authorities. Also in the country’s capital, students of the Pars Higher Education Institute of Art and Architecture continued the nationwide protests. Students of Tehran’s Allameh Tabataba’i University were also seen holding an anti-regime gathering and chanting “Poverty! Corruption! Injustice! Down with this tyranny!”

Tehran, #Iran
Security forces, plainclothes agents, and thugs associated to the regime were attacking people in the capital's Mirza Shirazi metro station, according to local activists.#IranRevolution2022#مرگ_بر_ستمگر_چه_شاه_باشه_چه_رهبرpic.twitter.com/sHNRQTqkr4

At the same time, in a sharp escalation of suppression, the regime formally deployed uniformed military units to various cities and regions in Western Azerbaijan and Kurdistan provinces. Members of the regime’s parliament (Mohammad Esmail Kowsari, former commander of the IRGC’s Sarallah Headquarters tasked with the capital’s security and MP from Tehran) also confirmed the dispatch of IRGC Ground Forces to Kurdish areas to crack down on protesters.

Other reports indicate that IRGC ground forces have closed a major transit route to Iraq at the Haj Omran Border Crossing. They also stationed heavy weapons and a significant number of troops, and are preparing for ground operations inside Iraqi Kurdistan, in yet another foreign adventure aimed at diverting attention from the uprising raging in Iran. 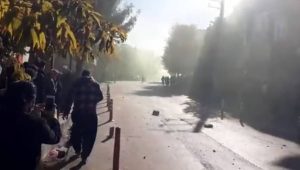 The nationwide uprising in Iran is entering a new phase as the regime has been launching lethal crackdown measures in Kurdish cities and resorting to severe internet disruptions to cloak its crimes against humanity. Monday was a day of horrific atrocities by the Islamic Revolutionary Guards Corps (IRGC) and the regime’s other security forces opening fire and using heavy, high-caliber machine guns against defenseless people in the cities of Javanrud and Piranshahr leaving dozens killed and injured. 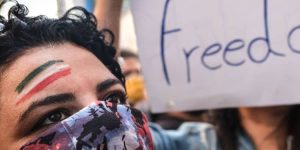 UN Human Rights Chief Volker Türk says the rising number of deaths from protests in Iran, including those of two children at the weekend, and the hardening of the response by security forces, underline the critical situation in the country.

We urge the authorities to address people’s demands for equality, dignity, and rights – instead of using unnecessary or disproportionate force to suppress the protests. The lack of accountability for gross human rights violations in Iran remains persistent and is contributing to the growing grievances.

World Appeases Mullahs, Iranians Are Gunned Down – Day 68 of Revolution

Saluzzo, Italy, November 2022: Demonstration and Conference in Support of the Nationwide Iran Protests

November 2022, Italy: The municipality of Saluzzo in Italy, in collaboration with the Equality Council, held a demonstration and conference in the theater of this city in solidarity with the women who stood up and supported the nationwide uprising of the Iranian people.

Vienna—November 18, 2022: MEK Supporters Rally in Support of the Iran Protests

Vienna—November 18, 2022: Freedom-loving Iranians and supporters of the People’s Mojahedin Organization of Iran (PMOI/MEK) held a rally in solidarity with the Iranian people’s uprising. They also commemorated the anniversary of the November 2019 uprising in Iran.