Written by The Editorial Board
23rd November 2022 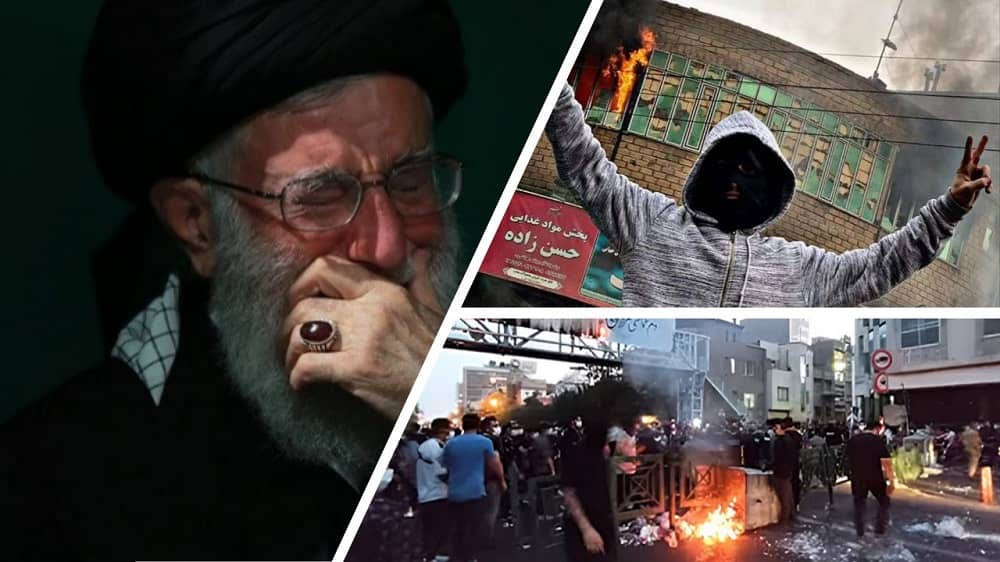 After two weeks of silence, the clerical regime’s supreme leader, Ali Khamenei, addressed his regime’s supporters on November 19. Following his failure to control Iran’s nationwide uprising despite imposing a heavy crackdown, Khamenei claimed protests would be “wrapped up” and finished soon.

Since the beginning of these demonstrations, Khamenei has delivered several speeches, each time claiming victory over the “enemy,” vowing to quash what he calls “riots” and what Iranians consider a “revolution.”

In reaction to this, Mrs. Maryam Rajavi, the President-elect of the National Council of Resistance of Iran (NCRI), said: “Khamenei said they would terminate the ‘riots’ and the ‘hotbeds of evil.’ Yes, with the victory of the democratic revolution, the hotbeds of 4 decades of evil crimes by religious fascism will be swept away forever & democracy and people’s sovereignty will be established.”

Khamenei said they would terminate the “riots” and the “hotbeds of evil”.
Yes, with the victory of the democratic revolution, the hotbeds of 4 decades of evil crimes by religious fascism will be swept away forever & democracy and people’s sovereignty will be established. pic.twitter.com/JzuknNyHrX

Khamenei spoke about the “wrapping up of protests” while the uprising continued across Iran, with people calling out his regime and chanting “death to the dictator” and “death to Khamenei.” University students in dozens of cities continued their strikes while chanting anti-regime slogans.

He boasted that the protests would be “terminated” in the near future, while his military officials, such as the Revolutionary Guards (IRGC) commander Hossein Salami, have repeatedly claimed the uprising has already “ended.”

Many experts consider Khamenei’s speech on Saturday a “pep talk” aimed to boost the morale of his demoralized forces, as the uprising persists despite their brutality, and people are now fighting back against the heavily armed security forces.

Khamenei senses the existential threat this uprising poses to his regime better than anyone else. Therefore, he quickly pivoted on Saturday and made yet another contradictory remark.

“The enemy has failed so far, but it lurks and plots daily,” he said. So, if the uprising has ended and Khamenei’s “enemy” has failed, what needs to be “terminated?” Maybe he means his real concern and “victory” is that people and their organized Resistance movement have not yet toppled his regime. In this case, Khamenei begrudgingly acknowledged his nightmare of an imminent downfall.

Khamenei announced the end of Iran’s Revolution for umpteenth time

Khamenei also acknowledged the regime’s increasing infighting and how authorities have lost “hope.”

“The enemy tries to force authorities, not just youth, to lose hope. Unfortunately, the enemy has a network inside the country and tries to spread the message of despair on social media,” he said.

While the ruling theocracy has been squandering the national wealth, achieving nothing but misery for Iranians, Khamenei blatantly spoke of the regime’s “advances,” including the production of a “launch vehicle” and another new “missile.” “The enemy tries to hinder these achievements by instigating riots,” Khamenei claimed.

Nevertheless, the regime’s Supreme Leader had to acknowledge the country’s dire economic crisis, created and amplified by state corruption and ineptitude but blamed it on the Hassan Rouhani government. “The 2010s were not a good decade, economically. The government should have applied my recommendations.”

It is common knowledge that Khamenei is Iran’s highest authority who selects the president. But by lashing out at the rival faction, Khamenei reminded the entire regime that the slightest rift at the top reduces the regime’s ability to quash protests.

As for the Iranian people, they have demonstrated their determination to topple the regime at any cost, also laying bare Khamenei’s weakness. The protests on Sunday and Monday, particularly the heroic resistance of Iranians in the Kurdish region against the regime’s all-out onslaught, once again showed that the nationwide uprising, which protesters themselves call a ‘revolution,’ would not end until the ominous rule of the mullahs has ended.

But in so far as it concerns the international community, it should react to Khamenei’s call for violence. Through Khamenei’s order, hundreds of unarmed protesters have been killed, including dozens of children. Khamenei’s IRGC thugs will certainly mount their violence to outflank the uprising. The West should indeed recognize the Iranian people’s right to self-defense and hold Tehran accountable for its atrocities. These are the first and foremost steps to support Iran’s democratic revolution.