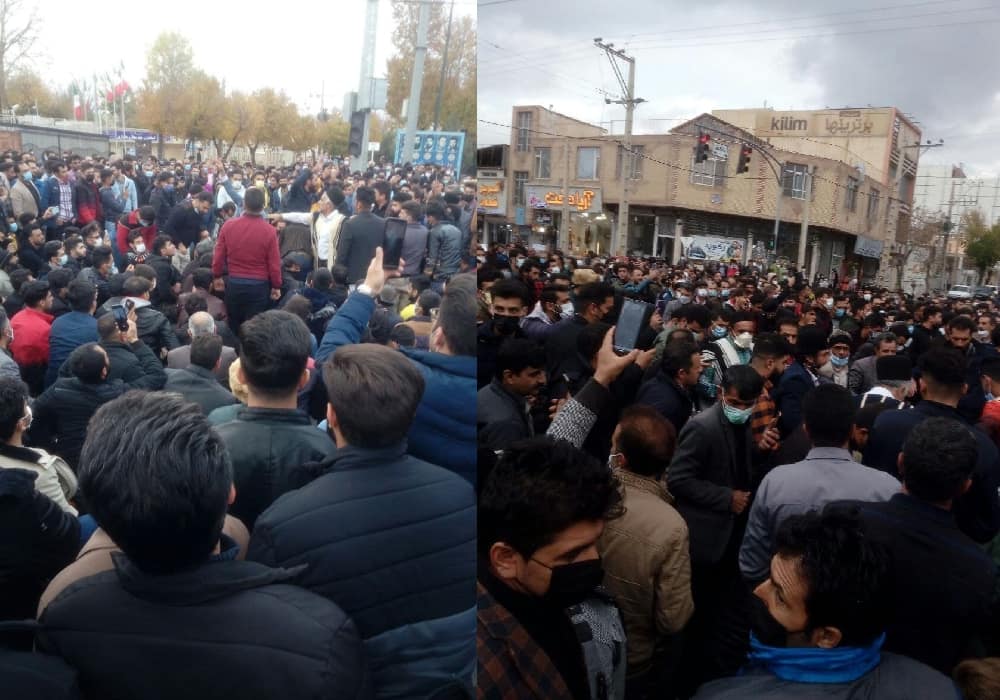 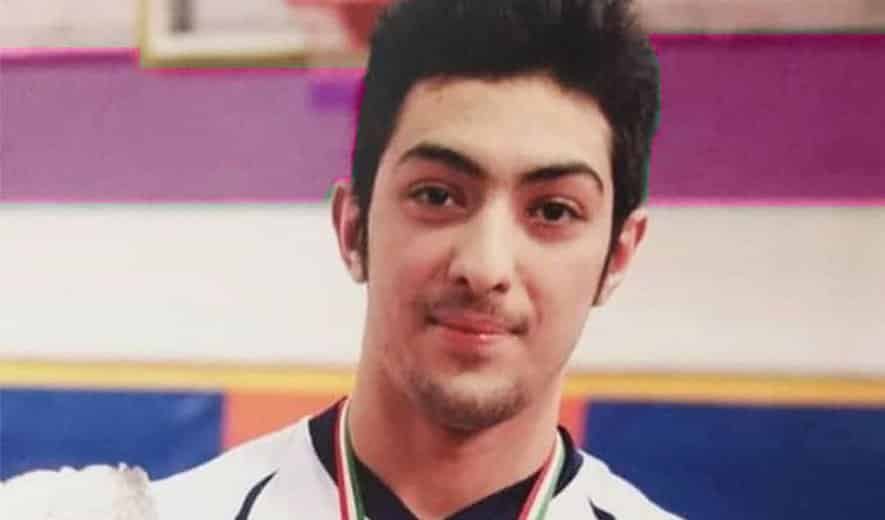 On October 12, the National Council of Resistance of Iran called on the UN Secretary-General, the Human Rights Council, the UN High Commissioner for Human Rights, and other human rights organizations to take immediate action to save the life of Arman Abdulali.

On Monday, the people and farmers of Isfahan protested for the 16th consecutive day against the disastrous policies of the state that is drying up the Zayandeh Rud river. The recent gatherings in Isfahan, that started on October 26, have continued around the clock at the dried river bed of Zayandeh Rud.

Farmers in Isfahan have warned that if their demands are not addressed by Thursday, they will call for a mass rally on Friday, and invite all the people of Isfahan to join their uprising.

Slaughterhouse workers staged a protest rally in front of the Khuzestan Industry and Mining Organization today, to protest their low salaries.

Also on Monday, workers of Lilco Company held a rally in front of the MP’s office from Shush to demand their rights.

On Monday, tow truck drivers in Tabriz staged a rally to protest the negligence of the regime’s Freight Transport Organization. According to protestors, the organization has failed to fulfill its obligation towards the drivers for more than seven years. A number of workers at the Friko Oil Factory in Sirjan staged a rally on Monday, to protest the authorities’ refusal to pay their salary for several months. Workers of the Aq Dareh gold mine in the Takab City gathered today, to protest the dismissal of at least 100 local workers. The workers, who have been laid off by order of their employer and are not allowed to enter the mining unit, say that gold mining has destroyed their agriculture and pastures and that they have no other means to make a living other than to work in the mine. Workers of the iron ore companies, namely Ajin, Mobin, Noavaran, Zohal among others went on strike at 10 pm on Sunday, to protest the dismissal of 60 workers’ activists. 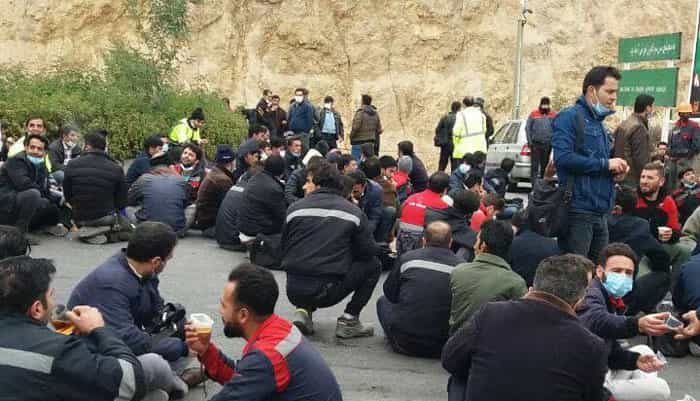 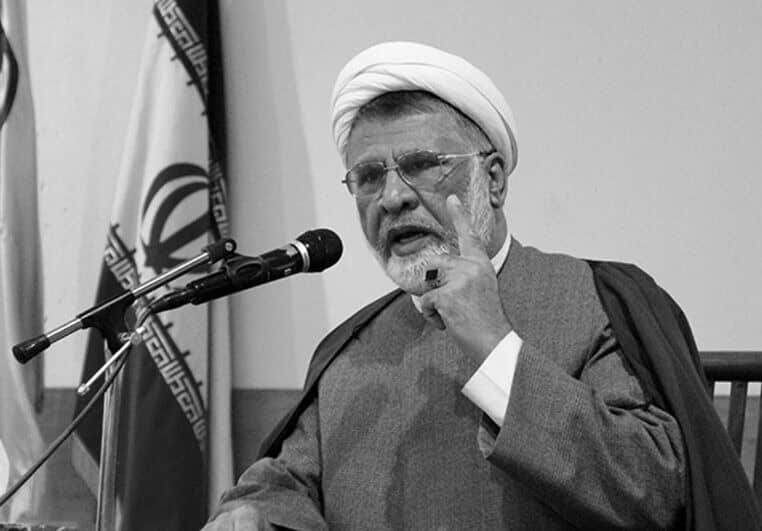 Mohammad Taghi Fazel Meybodi, a cleric and a state-affiliated expert, wrote in an op-ed that was published by the state-run Arman newspaper today: “The protest that took place at the bottom of the Zayandeh Rud river may not end there. If no serious measures are taken, we will face a bigger crisis. If we do not manage carefully, we will have to deal with larger crises than water.” 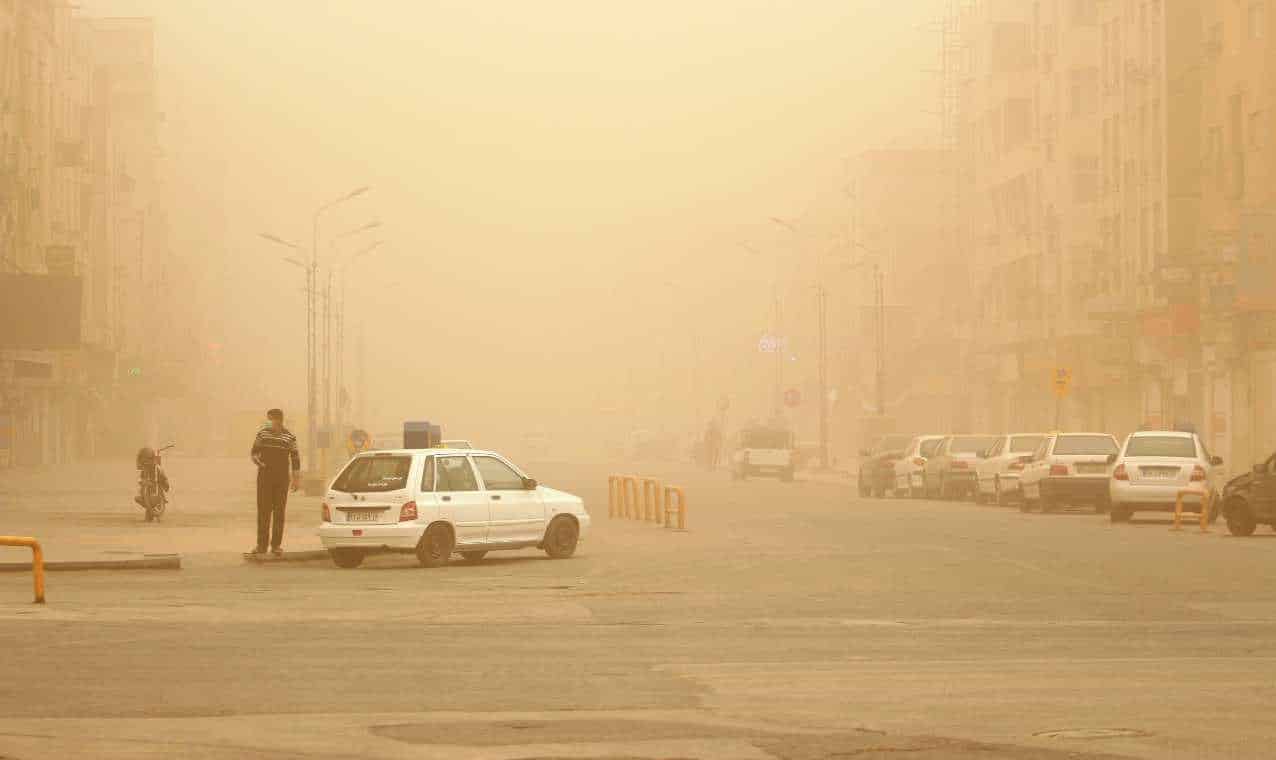 Abbas Shahsavani, head of the Air Polution and Climate Change Department at the Ministry of Health admitted that 3,751 citizens in Tehran have died last year due to air pollution.

“Last year in Tehran, on average, 3751 deaths were attributed to exposure to particulate matter, and all residents of Tehran have been affected by air pollution,” the state-run ISNA news agency wrote in a report on Monday.

In his interview with ISNA, Shahsavani added: “Last year, the average concentration of particulates in the cities was 29 micrograms per cubic meter, which is almost six times the World Health Organization’s standards. Last year, the cities of Zabol, Tehran, Ahvaz, Isfahan, and Mashhad had the highest concentrations of particle pollution.”

Protests in Shahrekord on Monday

Following a call by the people of Shahrekord to gather for a protest against the state’s policies and monopolizing the water resources, today, people and youth in Shahrekord began their protest rally early in the morning.

Following the spread of the uprising from Isfahan to Shahrekord, Ebrahim Raisi, the Iranian regime’s president appointed two former Revolutionary Guards as the new governors of two provinces on the western border of the country.

“In a meeting chaired by Ebrahim Raisi, Hassan Bahramnia and Gholam-Ali Heydari were appointed by the cabinet as governors of Ilam and Chaharmahal and Bakhtiari,” state-run news agency Borna reported.

Yesterday, large crowds poured on the streets of Shahrekord, the capital city of Chaharmahal and Bakhtiari province. The regime’s new governor, Gholam-Ali Heydari, has a criminal record as former commander of the Revolutionary Guards in Isfahan and Chaharmahal and Bakhtiari, as well as the deputy chief of the Basij and deputy head of the Passive Defense Organization.

Since assuming office in June, Raisi has been handing key positions to the IRGC commanders. Earlier, the governors of Khorasan Razavi, East Azerbaijan, Qom, Hormozgan, and Bushehr were appointed from IRGC ranks. 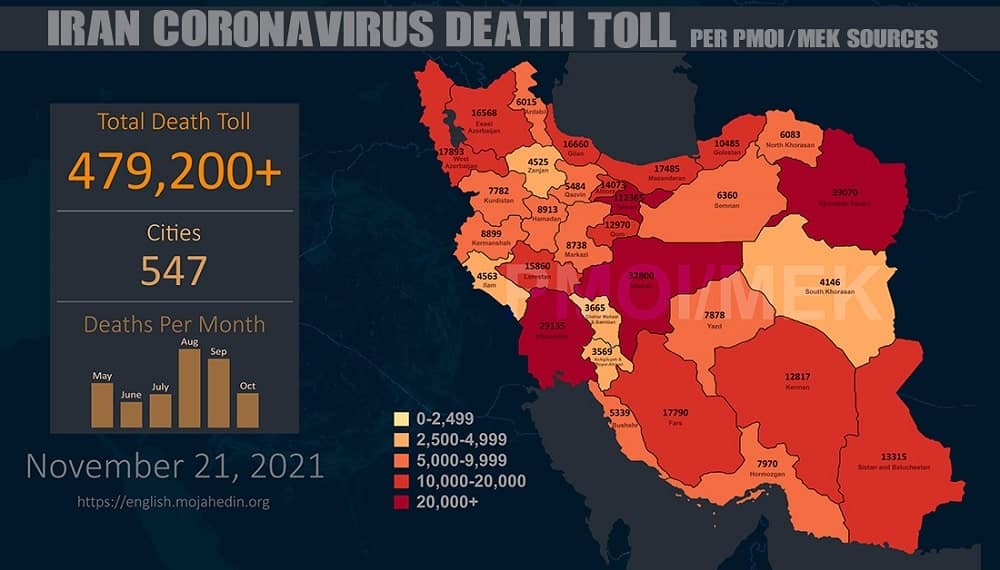 More than 479,200 people have died of the novel #coronavirus in 547 cities checkered across all of Iran's 31 provinces, according to the Iranian opposition PMOI/MEK. 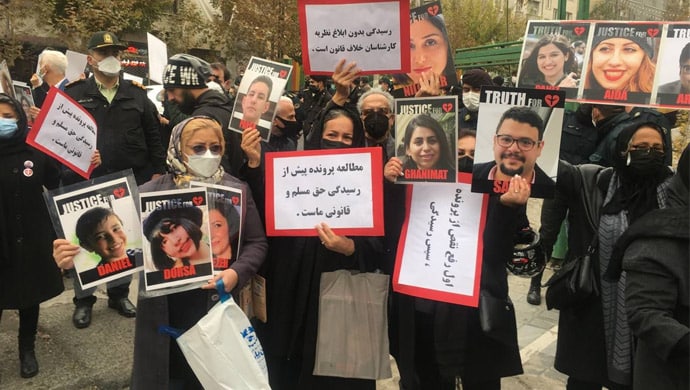 As the Iranian regime holds a formality court for a civilian airplane shot down by the Revolutionary Guards (IRGC) in January 2020, the families of the victims of the plane crash held a protest rally in front of the court. The heavy presence of security forces did not intimidate the protesters, who have been vocally calling for justice for their loved ones for nearly two years. 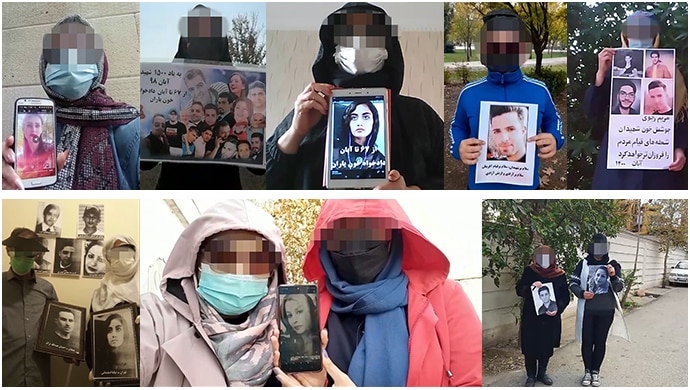 On the second anniversary of the November 2019 protests, Resistance Units across Iran continued to commemorate the nationwide uprising and pledge to continue the path of more than 1,500 martyrs who laid down their lives for freedom in Iran.

Resistance Units are a network of activists who support the People’s Mojahedin Organization of Iran (PMOI/MEK). Through their activities, the Resistance Units play an important role in countering the environment of suppression caused by the regime’s security forces.

Since November 2019, Iran’s Government Fears Protests Like the One This Week in Isfahan Stunned by the number of frustrated people and farmers who took part in Isfahan’s water protests on the dried-out ground of the Zayandeh Rood River over the past 14 days, Iran’s regime fears the expansion of these protests to other parts of the country. It has thus called this protest a ‘gentle rally’ and said that the Iranian people are drawing a line between themselves and those who are ‘rioters and those who are fomenting riots’.

The State of Miners in Iran, a Grim Reality 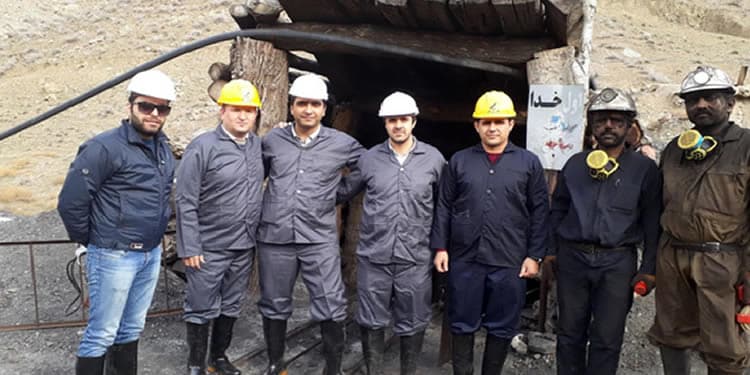 The history of mining in the world goes back to 20,000 to 40,000 years ago. With the development of the Mediterranean civilization, mining became one of the most critical industries in the world. As time passed and more technological advancements were discovered and developed, the mining industry also benefited from it. More effective mining methods were employed, and to safeguard the safety of the miners, more protocols and measures became laws and were implemented. 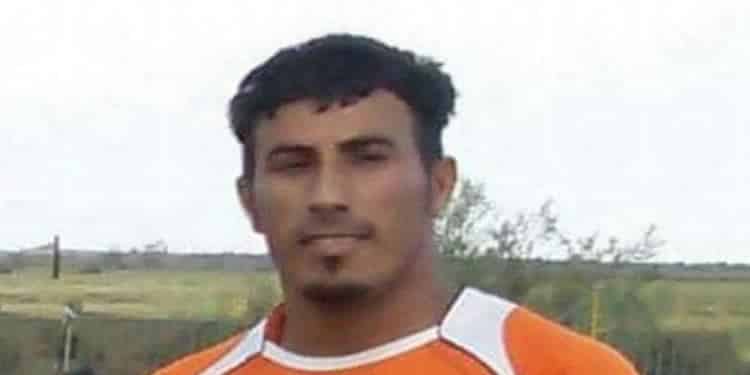 A fisherman was killed by military forces on November 18 in Hoveyzeh, in the southwestern province of Khuzestan. According to human rights groups, the man was identified as 32-year-old Ahmad Savari. An informed source said Ahmad was fishing in the Hur al-Azim wetlands (Hawizeh Marshes) when military forces opened fire on him. This is the eighth case in November that state forces kill innocent civilians in Iran. On November 15, narcotic forces shot and killed a Baluch man, and injured another. They opened fire on their car on suspicion that they were carrying drugs. 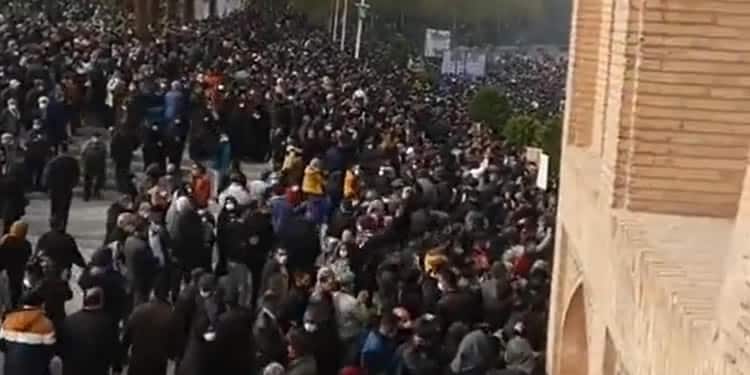 A man was detained in Falavarjan County in the central province of Isfahan for sending videos of the Isfahan farmer’s protests to an Iranian media outside of the country. According to the state-run IRIB television, the man was detained by security forces, but his identity was not stated in the report. Farmers in Isfahan started their protests on November 7 in front of the parliament member’s office, then gathered in front of the IRIB television office, and water companies then took to protest in the now-dry bed of the river.

Freedom-loving Iranians, supporters of the People’s Mojahedin Organization of Iran (PMOI/MEK), held rallies in Ottawa and Toronto, Canada, in support of the protests of farmers and the people of Isfahan. Iranian-Canadians in Ottawa and Toronto declare their support for farmers who took the main square in the city of Isfahan to protest Mullah’s regime and its corrupt, devastating practices which have nearly eliminated Iran’s water resources.