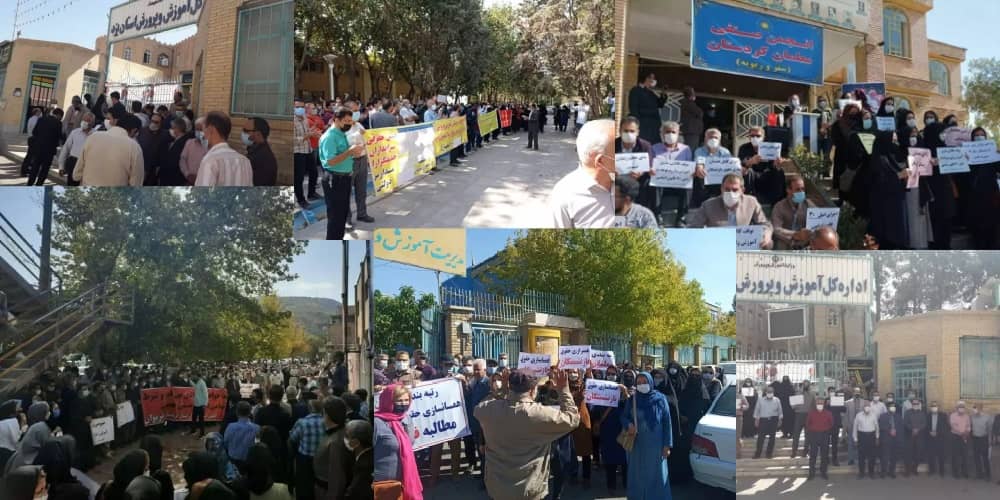 The Iranian regime’s Judiciary executed four prisoners in Dastgerd prison in Isfahan on the morning of Tuesday, October 12. According to HRANA, the name of the prisoners who had previously been sentenced to death for drug-related charges were Hossein Amiri, Hossein Shamsi and Ali Mokhtari from Isfahan as well as Yavar Dehzadeh from Hashtrood. At dawn on Monday, October 11, another prisoner, identified as Ismail Ghassabi, was executed in this prison.

The regime has also executed at least two prisoners in Kermanshah Central Prison at dawn on Monday, October 11. The name of one of the prisoners was Mohammad Latifi and he was just 23.

Also, on Wednesday morning, two other prisoners were executed in Central Prison in Qom. One of these prisoners was Ali Omar Amrollahi, an Afghan native.

Sir David Amess, British MP and a Friend of the Iranian People Murdered

Sir David Amess, 69, a British MP since 1983, was murdered while he was holding a constituency surgery – where voters can meet their MP and discuss concerns – at Belfairs Methodist Church in Eastwood Road North.

According to British media, police have said that a 25-year-old man was arrested on suspicion of murder after the stabbing at a church in Leigh-on-Sea.

Southend councilor John Lamb told the BBC that Sir David moved his surgeries to different locations around the constituency “to meet the people” and said the attack was “absolutely dreadful”. “We’ve lost a very good, hard-working constituency MP who worked for everyone,” he said.

Health Secretary Sajid Javid said he was “a great man, a great friend, and a great MP killed while fulfilling his democratic role”.

Flags around Parliament will be flown at half-mast.

Mrs. Maryam Rajavi, president-elect of the NCRI offered her condolences on behalf of the Iranian Opposition and the Iranian people:

Today, the Iranian Resistance lost an extraordinary friend and the people of Britain lost a great advocate of freedom and democracy. #DavidAmess was a staunch enemy of dictators, especially the mullahs’ tyranny. Sir David will always remain in our thoughts. pic.twitter.com/SzSvhAr4Io

1000 Iranian Officials Have Their Own Pharmacies

IRGC-affiliated news agency reported: “An audition of pharmacies across the country learned that out of 13,000 active pharmacies throughout Iran, 812 pharmacies were founded by public sector employees and non-governmental public institutions, and 221 pharmacies were established by employees who have policy-making positions in licensing and oversight in the pharmaceutical industry.”

In a report dated Thursday, October 14, the website of the Syrian opposition, Orient Net, described the Iranian regime’s efforts in Syria to continue the mobilization of sectarianism through militant organizations.

“The Iranian regime has now begun to strengthen a military brigade consisting of Syrian Shiites, based on sectarian lines; the Hashemite Brigade, alongside the Zainabiyoun, Fatimiyoun, and Husseiniyoun as well as other sectarian groups,” the report, compiled by Orient Net sources suggested.

According to the sources, the militants actually entered the front line at the beginning of 2021 and were based in the eastern Syrian city of Albukmal, where Tehran runs new bases in Deir ez-Zor, Raqqa, Aleppo, and the suburbs of Damascus. A person named Yusuf al-Hamdan, nicknamed ‘Abu Isa Mashhadani’, commands this brigade.

Orient Net added: “Sources stated that the brigade and its commander are directly affiliated with the Revolutionary Guards, including the so-called 47th Regiment, whose members are involved in theft, looting, and extortion from civilians.”

The reports also disclosed: “Whoever agrees and joins these groups, will receive a document that says he will be considered as the ‘generation of Sadat Ashraf’, ‘Hashemi’s clan’ and ‘Imam Hossein’s inner circle’ (citing the offspring of Prophet Mohammad). Additionally, he will receive a monthly financial share. He will then be ‘taken into account’ and enjoys political, military, and ideological support. He will also be given money to set up a military battalion and start recruiting centers, especially to train teenagers or elementary and middle school students. In addition, a group of relatives of these “new Shiites” can go to study in universities and religious centers in Qom.”

Security forces in Sardasht, Western Iran, fired directly at a group of toiling ‘kulbars’ (freight carriers) on Thursday and killed a young ‘kulbar’. The victim’s name was Jian Alipour, who was shot by the Revolutionary Guards at a close range in the border heights of Sardasht County. He was a native of Bijavi village in West Azerbaijan Province. He was the father of two.

Amid ever-deteriorating living conditions in Iran under the corrupt clerics, many unemployed men, young and old, are forced to carry heavy loads for long distances to earn some money and bring food to the table. These hardworking breadwinners of thousands of families are often targeted by the IRGC in the name of fighting crime, whilst the IRGC is among the biggest weapons and drug smugglers to the Middle East and beyond. 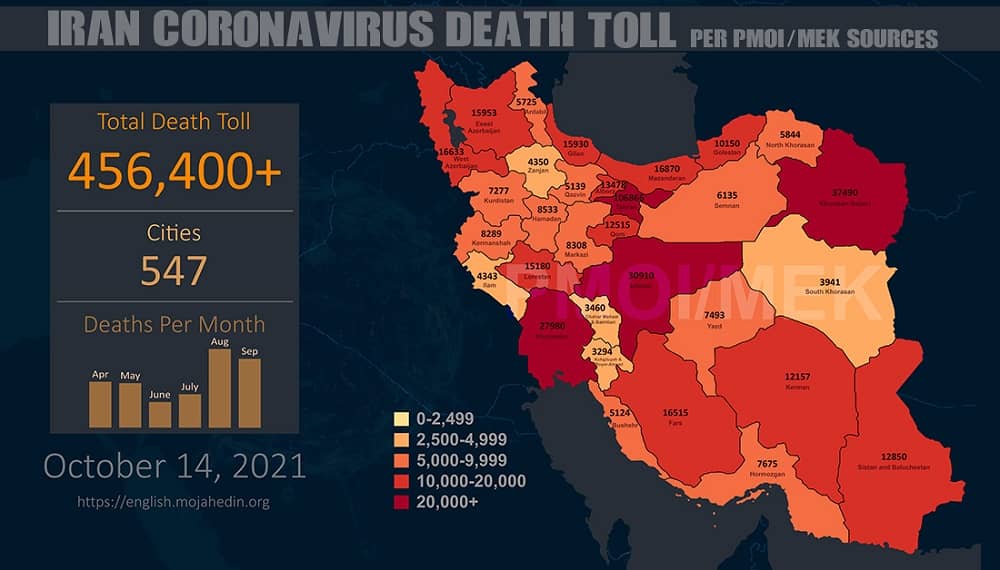 More than 456,400 people have died of the novel #coronavirus in 547 cities checkered across all of Iran's 31 provinces, according to the Iranian opposition PMOI/MEK.

London Conference Calls for the Arrest of Ebrahim Raisi 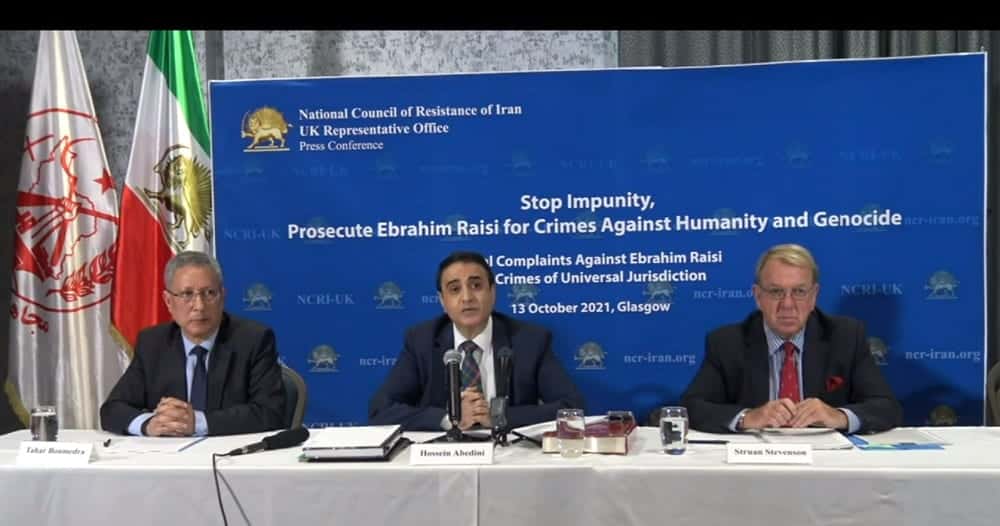 Iranian regime president Ebrahim Raisi must be arrested and prosecuted for crimes against humanity and genocide, speakers at a conference held by the office of the National Council of Resistance of Iran (NCRI) in London said on Wednesday. The conference was held shortly after the spokesperson for the regime’s foreign ministry declared that Raisi would not be traveling to Glasgow, Scotland, to attend the UN Climate Change Conference (COP26) scheduled for early November. In the past weeks, Iranian ex-pats have held rallies in several cities across the world and called for Raisi to be held to account for his decades-long human rights abuses, especially against dissidents and members of the Iranian opposition.

What Is Behind Iran’s Rising Inflation and Skyrocketing Prices?

Iran is the only country in the world that has had double-digit inflation rates for more than four decades, economic experts believe. leading to the rapid spread of poverty and the destruction of economic and social structures. “Economic statistics have gone beyond catastrophe,” according to the state-run Hamdeli daily on October 10.

“According to the latest Central Bank report, the volume of liquidity exceeded 39,000 trillion rials (about $140 billion). This figure indicates a 40 percent increase in liquidity over the past year,” an October 10 report by the state-run Vatanemrooz daily reads in part regarding Iran’s liquidity increase. 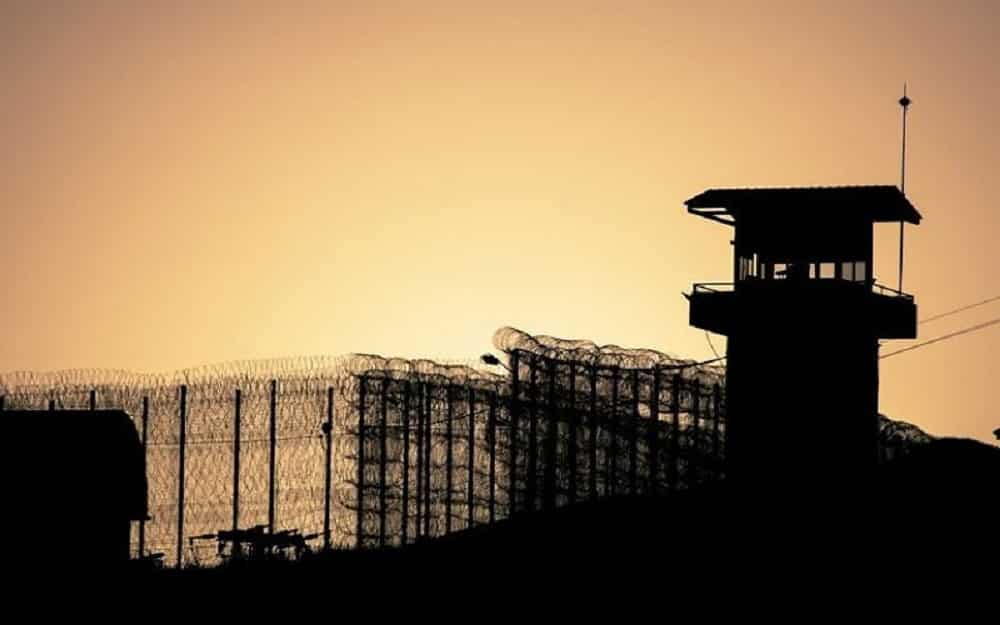 Two years ago, Taghi Rostamvandi, the then head of Iran’s social affairs organization, said: “Iran, with 240,000 prisoners, ranks ninth in the world in terms of the total number of prisoners.” At the same time, Seyed Hassan Mousavi Chelek, president of the state-affiliated Social Welfare Association, said: “Fifty people enter prison every hour.” 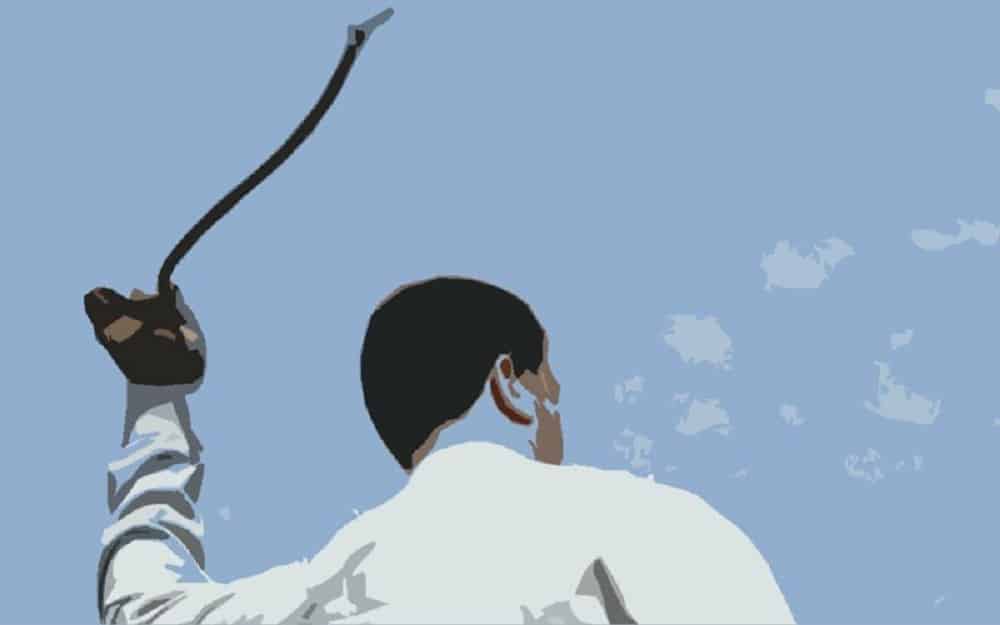 The European Union special envoy, Enrique Mora traveled to Iran on October 14 to meet with Iranian officials to coordinate talks to revive the 2015 nuclear deal, despite the concerns raised by the international community at a recent meeting of the United Nations Human Rights Council in Geneva regarding Iran’s brutal human rights abuses and increasing executions since Ebrahim Raisi’s rise to the presidency.

The spokesperson for Iran’s Foreign Ministry, Saeed Khatibzadeh said that Mora’s trip “follows consultations between the two sides on issues of mutual interest, including relations between Iran and the Union, Afghanistan and the nuclear accord.”