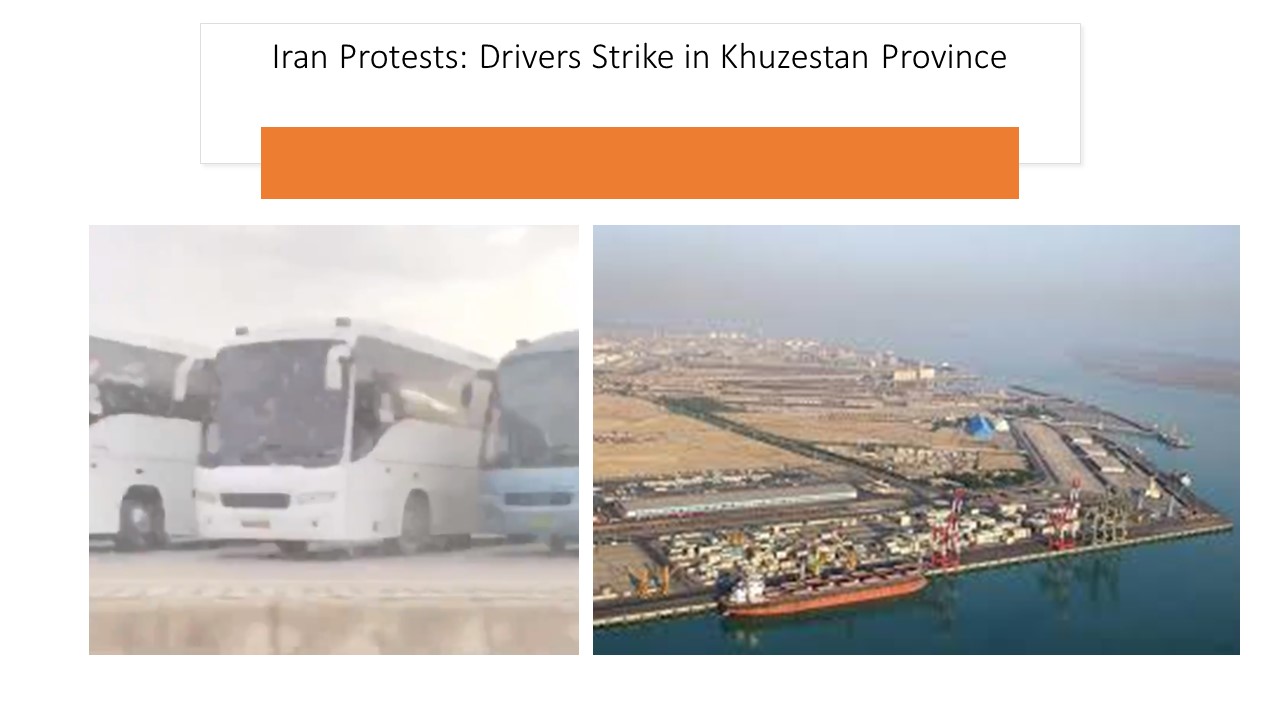 130 Members of Congress agree, “the Iranian people have been deprived of their fundamental freedoms for which reason they rejected monarchic dictatorship and are opposing religious tyranny”

H.Res 374: “Mrs. Maryam Rajavi’s 10-point plan for the future of Iran, which calls for the universal right to vote, free elections, and a market economy, and advocates gender, religious, and ethnic equality, a foreign policy based on peaceful coexistence, and a non-nuclear Iran.”

The Iran people’s movement will achieve certain victory. This movement is already building the foundations of a free, democratic and prosperous Iran.

Hezbollah Base Attacked Near Syrian Border.

Drivers who transport employees to Khomeini Port (Bandar Shahpour) have gone on strike in protest to low pay, high prices, and officials’ broken promises. The drivers take around 5,500 workers to work everyday.

Iran’s women athletes despite overcoming obstacles and winning championships, run into the wall of misogyny of the mullahs’ religious dictatorship. Ultimately, they prefer to leave their homeland rather than continuing their careers under the mullahs’ rule.

On November 29, 2019, Abolfazl Bahrampur, an Iranian regime-linked jurist, attend an interview with the state-run TV channel one. He bluntly called authorities to employ inhuman punishments against detained protesters in the deterrence of upcoming uprisings. “They [protesters] should be tortured, crucified, or hanged to death. Their hands and feet should be cut in the opposite direction. We won’t face any problem with the next round of protests in the future if one of these sentences was implemented [and youths never dare to protest]. “These sentences should be publicly done where they [protested]. [Protesters] should be executed or punished. “Later, they should be chopped in a disastrous state. Their right hand and left foot; for instance, four fingers of the right hand and the toes of the left foot should be cut. Then they should be released in this state in the society [till the people be terrified]. Or they should be exiled from the country—not a place such as Shiraz with a nice climate. They should be exiled in the middle of a sea with a scraped ship to spend their lives there to die. This is ‘exile.’ “Additionally, I would like to criticize some of our friends and partners. Anyway, God preserves Mr. Raisi, the head of the Judiciary System who led thousands of political prisoners to gallows in the summer of 1988. “It is wrong if we believe that they are some youths who became excited. No, [it shouldn’t be justified] if they became excited why not for the establishment and the martyrs? A couple days ago, these [protesters], who were advised, would kill us! [We shouldn’t show mercy].”

Saturday, January 25, 2020, marks the 72nd day since the beginning of the nationwide Iran protests.

Previous articleIran’s Regime and Its Deadlock in Adopting the CFT
Next articleCNN: American Herald Tribune Is Run by Iran’s Regime