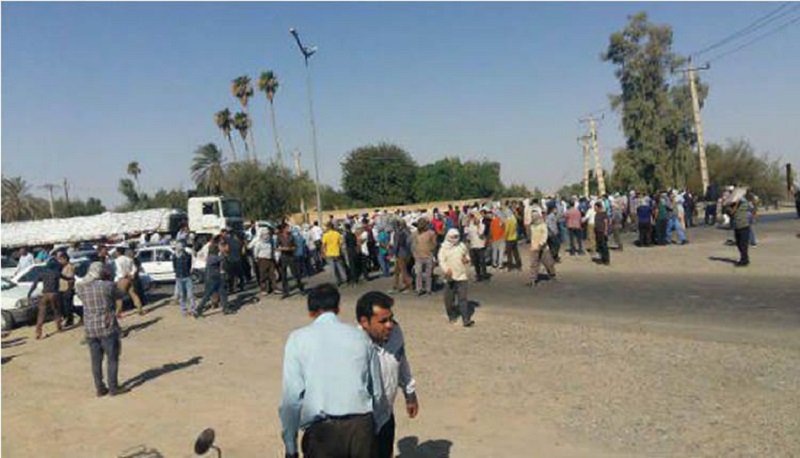 Workers at the Haft Tappeh Sugar Cane Mill entered their sixth day on strike in protest to the expulsion of their colleagues and the return of their laid off colleagues-September 28, 2019

Written by Mansoureh Galestan on 29 September 2019.

The Haft Tappeh company began work in 1959. In the winter of 2015, in the course of turning big state-owned companies to the Revolutionary Guards (IRGC) and security apparatus, the company was put under the control of cover companies belonging to the IRGC and the security organs. That sparked workers’ protests.

Strikes and protests flared up since two years ago. Six days since the new round of strikes have passed in spite of pressure and oppression on behalf of security forces as well as empty promises made to the workers.

The workers’ main theme of protest is why such facilities belonging to the state have been turned over to relatives of Eshaq Jahangiri, Hassan Rouhani’s First Vice President. Owners do not miss a chance to hinder payment of workers’ wages.

Workers on strike have called for the removal of the company’s managers and the handing of the company to the workers’ council, something which has never materialized and has been, on the contrary, a pretext for oppression and expulsion of workers.

Last month, seven workers at the Haft Tappeh Sugarcane Mill were sentenced to an eight-month suspended prison sentence and thirty lashes for exercising their rights to peaceful protest over the non-payment of wages and demanding better working conditions.

In November 2018, Haft Tappeh workers held various protests for over 20 consecutive days related to unpaid wages and other grievances that sprang up after the company was privatized.

The complaints were not addressed and Iranian authorities began to arrest workers, with at least two subjected to torture and other ill-treatment in detention.

In mid-August 2018, some 500 workers protested over three months’ unpaid wages. Riot police attacked the workers with tear gas and beat them. Five workers were also detained but later released after being charged with “disrupting order”.