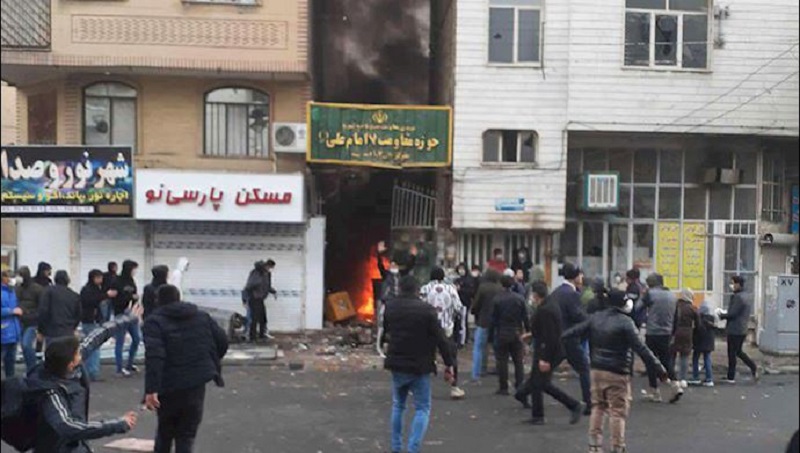 Setting fire to the Basij base by rebellious youth during the Iran protests. November 2019- file photo

The Iranian regime is sending its intelligence agents to remove the bodies of protesters killed in the past five days from morgues, according to reports from the domestic network of the People’s Mojahedin Organization of Iran (PMOI), or Mujahedin-e-Khalq (MEK).

More than 200 protesters have been killed during the Iranian people’s nationwide uprising which began on Friday, based on a tally compiled by the MEK’s sources in Iran. Thousands more have been wounded. On November 17, 2019, the Revolutionary Guards (IRGC) said 1,000 protesters had been arrested, though the actual number is much higher.

There are several credible reports of bodies being removed from Iranian morgues.

The MEK has confirmed that in Shiraz, agents of the Ministry of Intelligence and Security (MOIS) raided hospitals and took injured protesters to unknown locations. They also removed dead bodies of protesters from the morgue at one of the hospitals.

The repressive forces,include State Security Forces(SSF), the #IRGC, Ministry of Intelligence and Security (#MOIS), special anti-riot units and plainclothes agents.
In many instances, #protesters succeeded in pushing back the regime's assailants.#IranProtests #FreeIran #MEK

There are also numerous reports of suppressive forces refusing to hand over the bodies of those killed in the Iran protests to their families and even refusing to take them to the coroner’s office, instead of burying them in unknown locations.

A hospital employee in Tehran, affiliated with the MEK’s domestic network, reported seeing 65 dead bodies of protesters at the hospital over the weekend.

Iranian opposition leader Maryam Rajavi on Monday called on the United Nations Secretary-General António Guterres to brief the Security Council about the atrocities perpetrated by the religious dictatorship ruling Iran, its Supreme Leader Ali Khamenei, and the IRGC, in view of the rising number of those killed and wounded. Mrs. Rajavi urged him to convene an extraordinary session of the Council.

The international community’s silence and inaction is unacceptable. The UN Security Council must declare that the religious fascism ruling #Iran is engaged in crimes against humanity. #IranProtests pic.twitter.com/OaDue7i8Xq