The content of this page will be updated with the latest news of the Iran protests.

Cities across Iran are experiencing a number of demonstrations, and the nationwide uprising is expanding into its eleventh consecutive day on Monday, November 25.

Tehran and other cities are witnessing ongoing protests as the Iranian people have risen for regime change in at least 173 cities across the country, with at least 400 killed and over 4,000 people injured by the regime’s oppressive security forces. Reports also indicate more than 10,000 protesters have been arrested.

Protesters are demanding the overthrow of the Iranian regime and targeting its Supreme Leader Ali Khamenei, President Hassan Rouhani and the Revolutionary Guards (IRGC) as the source of corruption and economic and social problems and lack of freedom and fundamental rights.

Reporting by PMOI/MEK Iran, November 2019—New videos are coming in from Iran’s latest round of protests after the internet was partially restored across the country. Newly obtained documents show Iranian security forces attacking protesters. Protests that erupted after the Iranian regime imposed new price increases gasoline spread across more than 160 cities in the span of a few days. Despite a brutal crackdown and a near-total internet shutdown, the regime did not succeed in stopping the protests. We will publish new videos about Iran protests 2019 as we receive them.

Reporting by PMOI/MEK Iran, November 2019—New footage obtained from Iran after the restoration of internet communications shows security forces directly shooting at demonstrators. In many cities, large crowds are calling for the overthrow of the ruling regime and call off the regime's expensive meddling in neighboring countries.

In Zanjan, northwest Iran, the people held a demonstration on Sunday night and chanted, “No fear! We’re all together!”

A report from Karaj, west of Tehran, to the MEK network sheds more light on the brutality practiced by the regime’s forces during the recent crackdown. “Authorities opened immense fire in the Mehrshahr district of Karaj. A 17-year old girl was shot in the head and died. Nearly 15 other were wounded. I don’t know how many were killed. Authorities pressured this girl’s family to remain silent… [Authorities] first shot plastic bullets. Then they started using pellets. Realizing they could not control the crowd, they dispatched a helicopter to this district, and then they started attacking and using live ammunition. A number of people were shot and wounded right before my eyes. Unfortunately, I couldn’t take any footage because I was busy helping the wounded… All the banks in the Mehrshahr district of Karaj have been torched. Most of the banks in the Golshahr district are also destroyed.”

Reports from Shiraz, central Iran, indicate an IRGC colonel was severely beaten in the recent unrest, indicating the scope of the clashes when protesters are able to reach such a high-ranking IRGC officer on the ground.

The US Representative office of the National Council of Resistance of Iran (NCRI-US) will hold a press conference on Tuesday to disclose new details on the scope of the nationwide Iran protests that have shaken the regime to its foundations.

On Sunday, November 24, supporters of the Iranian Resistance and the PMOI/MEK in the United Kingdom held a rally outside the mullahs’ embassy in London, voicing their solidarity with the national uprising in Iran and condemning the ruthless crackdown.

NCRI Letter to the Editor of the Washington Post:
U.S. Should Provide Internet Access for Iran Protests

The U.S. should provide Internet access to Iranian protesters. My commentary in the @washingtonpost https://t.co/pOnaeSfpc8 #IranProtests #Internet4Iran @DonaldJTrumpJr pic.twitter.com/AKjuDAeUZT

Senator Leo Housakos, Senator from Quebec. Former Speaker, Senate of Canada: FREEDOM, it is the most essential element in the human spirit. We must support the good people of Iran in their fight for FREEDOM.

FREEDOM, it is the most essential element in the human spirit. We must support the good people of Iran in their fight for FREEDOM. https://t.co/BGROnSW5yz

Maryam Rajavi: The UN must immediately send investigate and fact-finding mission to Iran 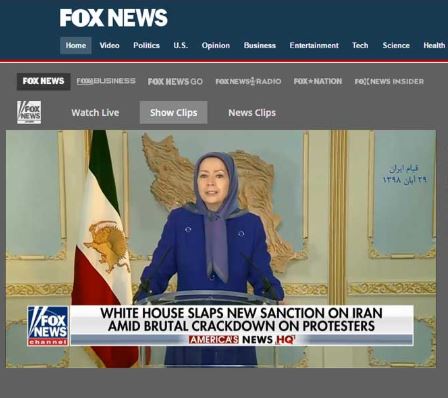 Commenting on the Iranian people’s nationwide uprising during a press conference on Sunday, November 24, 2019, Ali Shamkhani, the criminal Secretary for the regime’s Supreme National Security Council, said, “These people were connected to governments and the Mujahedin-e Khalq (MEK)… I believe 34 MEK members have been arrested so far. A vast network of individuals, operating not under the MEK’s name, but pursuing their line and modus operandi were also identified.”

Despite the presence of herds of Revolutionary Guards, the paramilitary Bassij, the State Security Force plainclothes agents, and MOIS agents in streets and city squares, young people demonstrated and clashed with the suppressive forces in many cities in Iran.

Despite the presence of herds of Revolutionary Guards, the paramilitary Bassij, the State Security Force plainclothes agents, and MOIS agents in streets and city squares, young people demonstrated and clashed with the suppressive forces in many cities in #Iran#IranPortests #MEK pic.twitter.com/oziXWlIAG4

Netblocks is reporting a gradual and calculated return of internet access in Iran:

Netblocks Update: It has been 200 hours since #Iran shut off the internet amid public protests in dozens of cities.

Basic connectivity is returning, but many users now face a #filternet that restricts access to the outside world.

Update: It has been 200 hours since #Iran shut off the internet amid public protests in dozens of cities.

Basic connectivity is returning, but many users now face a #filternet that restricts access to the outside world 📈⚠️ #IranProtests #Internet4Iran