International Condemnation of Iranian Regime's Crackdown on the Protesters 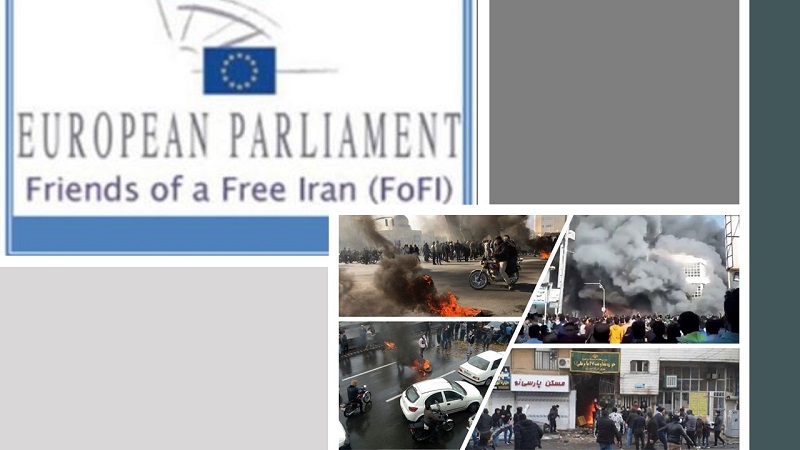 The Friends of a Free Iran (FoFI), an informal intergroup in the European Parliament, issue a statement calling “to end brutal crackdown on protesters in Iran.

Written by Mansoureh Galestan on 02 December 2019.

As protests continue in Iran, international condemnation of the Iranian regime’s crackdown on the protesters also continues. The Friends of a Free Iran (FoFI), an informal intergroup in the European Parliament which was formed in 2003 and enjoys the active support of many MEPs from various political groups, issue a statement in this regard calling “to end brutal crackdown on protesters in Iran with hundreds killed, thousands wounded and thousands more arrested”

“On Friday evening, November 15, 2019, Iranian cities were the scenes of protests against the tripling of gasoline prices. Protests have so far spread to over 176 cities and 31 provinces across Iran. People chanted slogans: “Down with Rouhani”, “Down with Khamenei”, “Down with Dictator”, “We will not rest until we gain our rights.”

The inhumane clerical regime in #Iran continues a widespread campaign of reprisals and lawless detentions throughout the country in response to the widespread uprising that began on November 15.#IranProtests #MEK pic.twitter.com/YGi9LSihVe

The supreme leader Ayatollah Ali Khamenei has ordered the Revolutionary Guards and other security forces to open fire on the demonstrations in different cities. The number of those killed keeps rising.” The FoFI’s statement reads adding:

“Reports coming from Iran indicate that at least 450 protesters have been killed in Tehran, Shiraz, Isfahan, Tabriz, Ahvaz, Sirjan, Behbahan, Shahryar, Khorramshahr, Marivan… and thousands have been wounded, many in critical conditions. However, protests continue throughout Iran.”

The statement is concluded by supporting the Iranian opposition leader and calling on EU to stand with the Iranian people:

“We support the appeal by Mrs. Maryam Rajavi, President-elect of the National Council of Resistance of Iran who called this “an uprising to end 40 years of dictatorship and terrorism in Iran. Regime leaders must face justice for crime against humanity.”

This is an uprising to end 40 years of dictatorship and terrorism in #Iran. Regime Leaders must face justice for crime against humanity #IranProtestshttps://t.co/i2TCyZsivl pic.twitter.com/GLdVnf7JBI

“We urge the European Union and member states to stand with the Iranian people in their desire to live in freedom and democracy and to take urgent action to end the brutal suppression of protesters.

“We call on EU heads of state or government and the EU High Representative for Foreign Affairs and Security Policy to strongly condemn the crackdown on demonstrators, release all detainees and to support the Iranian people’s uprising for a free and democratic Iran.”

On December 1, 2019, the Secretariat of the National Council of Resistance of Iran (NCRI) released a statement in regard to the number of people killed by the regime’s security forces. The statement indicates that the People’s Mojahedin Organization of Iran (PMOI-MEK) has reported that over 600 people have been killed in the uprising. The MEK has already published the names of 194 victims.

“Mrs. Maryam Rajavi, the President-elect of the National Council of Resistance of Iran (NCRI) called on the international community to undertake urgent measures to stop slaughter and suppression. She urged the United Nations to immediately dispatch fact-finding missions to Iran to ascertain the scope of crime against humanity perpetrated by the regime and to visit those detained. The leaders of mullahs’ regime must face justice for committing crimes against humanity. Silence and inaction not only violate human rights principles but also embolden the ruling theocracy to continue its crimes and expand them to the region as a whole.” The NCRI statement reads.

Death Toll in Iran Protests Surpasses 600; Wave of Arrests Continues- I urge the international community to take urgent action to stop the killing and repression in #Iran #Iranprotests #FreeAllProtestershttps://t.co/m1kjSy8l6Z pic.twitter.com/Ah4cGE7XTg