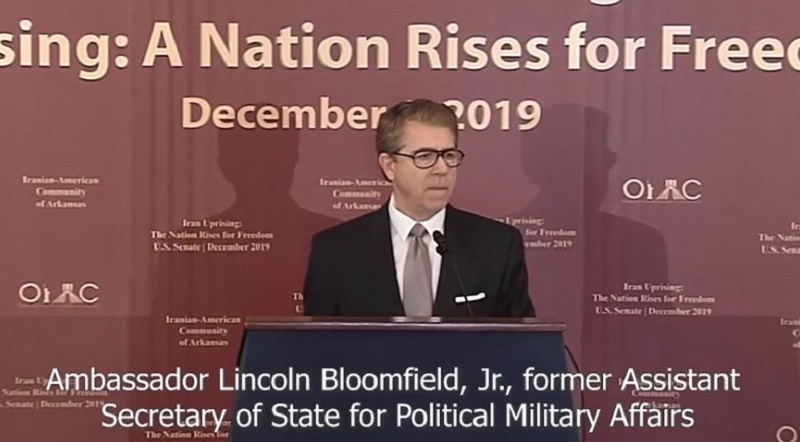 Ambassador Lincoln Bloomfield Expresses His Support of the Iran Protests at the U.S. Senate Briefing.

On December 4, 2019, Ambassador Lincoln Bloomfield, the former United States Assistant Secretary of State for Political-Military Affairs, participated in a briefing at the U.S. Senate, over the recent nationwide Iran protests. Ambassador Bloomfield supported the Iranian people's uprising and their organized resistance, the National Council of Resistance of Iran (NCRI) and the People's Mojahedin Organization of Iran (PMOI, Mujahedin-e Khalq or MEK). Below is the full transcript of Ambassador Bloomfield's speech.

BLOOMFIELD: Tim, thank you very much, and good afternoon, everyone.  I want to thank the OIAC members who are here today and their colleagues back home in their states for hosting this holiday luncheon.  I hope all of you are ready to enjoy a great holiday season, ready to enjoy a fantastic Persian meal.

Ambassador @LBJunior ar @OrgIAC Senate Briefing on Iran: And are you ready to identify people among the opposition groups of Iran who have a plan to move toward legitimate government, based on consent of the government?" @StateDept https://t.co/8IEA4QyYtK @VOAIran @USAdarFarsi

.... Are you ready to explain why the people have risen up?  It’s not just a recent hike in gas prices.  Gas prices have gone up many, many times in Iran.  It’s not because America withdrew from the JCPOA Nuclear Accord.  The economy was collapsing before the sanctions were put on by the Americans.  That revolution was never consummated in 1979.  And that’s—this is kept coming back to the streets in 1981, in 1999, in 2009, and now it’s back in full force in 2019.  That’s what’s happening.  So, you need to explain the history of this regime and why they never achieved legitimacy.

Are you ready to help your Senators organize hearings?  Can you find Iran experts who anticipated the collapse of the clerical regime?  Good luck with that.  I’ve listed to all of the thinktank Iran watchers and media correspondents.  They all say the same thing.  “Oh, the regime is in no danger of collapse.”  How many of them predicted the fall of the Soviet Union?”  So, I think we need to rethink and avoid strategic surprise.

Are you ready to explain why Iran will not collapse into chaos, as happened, unfortunately in Iran, in Iraq, and Libya.  Iran is different from Iraq and Libya.  No offense to those great Arab countries.  They have 2500 years of proud civilization.  They have well over a century of striving for democracy.

And are you ready to identify people among the opposition groups of Iran who have a plan to move toward legitimate government, based on the consent of the government—of the governed?  You’re sitting in a room with people, all of whom can explain to you what that plan is.

Are you ready for Congress to make specific recommendations to the administration?  You’ve heard some ideas already today about the internet.  That’s vital.  Perhaps there could be a UN Security Council resolution offering international support and good offices if there is to be a transition from the clerical regime to a legitimate government.  Look at 2254 which was the Syria resolution.  Why shouldn’t the Iranian people enjoy the same support from the world community?

How about calling for a thorough counterintelligence investigation to identify the regime’s agents of influence in the United States?  And guess what?  They will find many.  And this includes, I’m sorry to say, parts of the media.  The public needs to understand how certain newsgroups and reporters have made a tacit deal with the regime in order to gain privileged access and safe passage in and out of Iran.  How about asking the FBI to vet the most visible experts, the ones who get quoted in the Times and the Post and all the other papers every day about Iran?  Who seem to have easy access to senior leaders of this regime.  How about examining how the regime may have supported some of the other opposition groups in order to divide and conquer and make sure that all of those Iranians who want to see change never unite into a single force?

So, my friends working on Capitol Hill, you need to be ready, because one fine day, you’re going to have a lot of work to do.  You need to know why the people rose up, why the regime collapsed, why the Washington experts didn’t see it coming, and above all, what to do next. ..... ...

First, if the NCRI is not a terrorist group—and it never was, and that’s a fact—why did the U.S. government and other governments find it convenient to put them on the terrorism list?  That’s actually an easy question.  There are plenty of books written about that.  The NCRI was the one who exposed Iran’s nuclear enrichment program in the early 2000s.  They’ve published detailed books.  Many of them are probably outside the door here.  Book after book on subjects like a guide to all of the bases of the Revolutionary Guards in Syria, who the commanders are, where they’re located, the locations of the regime’s terrorist sites and training sites inside Iran, details of the industrial conglomerates that are owned by the religious foundations under the Supreme Leader or the Revolutionary Guards.  They control all the contracting.  They control all the banks, as you already heard.  Books about many of the aspects of the smuggling routes throughout the Middle East, a guide to the regime’s recent terror operations across Europe, country by country.  And now, a guide to the regime’s security leaders in each of the provinces of Iran—the people running the suppression of the protests.  In other words, they generated an entire catalog of well written, well-researched publications which are all registered with the Library of Congress.  Excerpts. Please watch the Ambassador's full remarks.