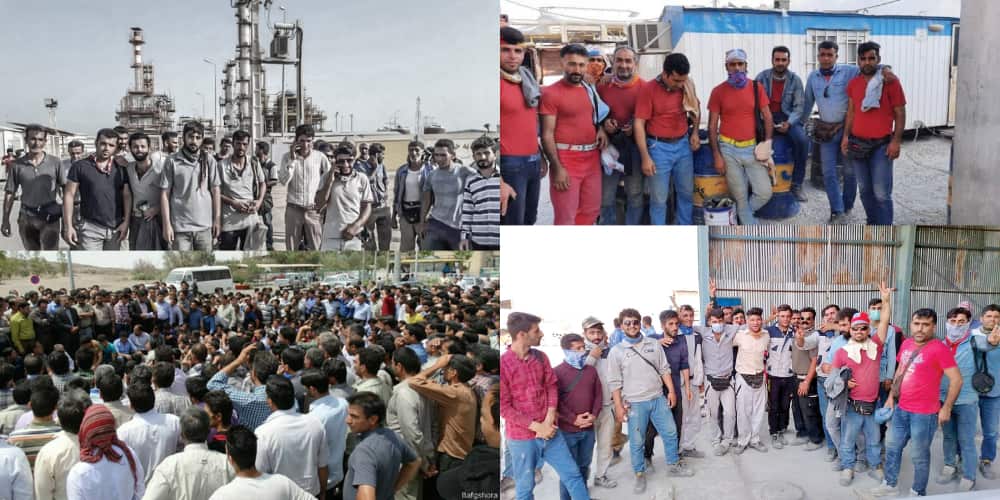 Iran’s contract workers went on strike twice since last year. They began their first round of strikes in July 2020, which lasted for a month and a half. The workers threatened that if the regime officials refuse to fulfill their demands, they would resume their strike starting March 2021.

The oil workers ultimately started their second phase of the strike in March 2021. This time, the strike was more widespread than before. They started a campaign known as 10-20, which meant they would work for twenty days and have ten days paid leave and be considered as official workers. This campaign has continued to the day of this writing.

The new wave of strikes extended throughout Iran. Tens of thousands of workers held protests in 114 cities. Now over 40% of workers still continue their strike, and 60% have returned to work. The oil workers’ strike in Iran got wide media coverage worldwide, and many national and international workers’ unions supported the Iranian oil workers’ strike.

“Footage has spread across social media showing construction workers at 60 oil and petrochemical installations, largely in the country’s oil-rich south, walking off their jobs in protest,” AP reported on June 30.

“I warn all related authorities and officials that disregarding the protests of those who have found all usual forms to express their demands blocked will not carry good consequences,” he said.

Mrs. Maryam Rajavi, the President-elect of the NCRI called on all workers and youth to support the strikers. She also underlined that “Repression and expulsion will intensify the workers and laborers anger against the anti-labor and inhuman regime, and adds to the public’s resolve to overthrow the regime and establish freedom and justice.”

Hail to the striking oil workers and laborers. I urge all workers and youths to support them. So long as the mullahs’ inhuman and anti-worker regime rules #Iran, poverty, high prices, and unemployment will be on the rise. #IranProtests

It is crucial to understand the workers’ demands, what they have achieved, their current situation, and what will happen in the future. Workers’ general demands include:

– Twenty days of work and ten days off: Since many workers live far from their workplace, they have to sleep at the location where they work. Hence, considering the long journey back home, they are only left with six to four days off.

– Double wages at all levels.

– The salary of a worker should not be less than 12 million Tomans, which considering the ever-rising inflation rate is at the edge of the official poverty level already.

– Return of fired workers during the strike.

– Job security: workers’ contracts should be written, formalized, and guaranteed at least until the end of the project.

– Contractors should be removed from the project, and workers should work for the parent company or Iran’s Oil Company.

– Officials should end the inhumane situation of camps where workers reside while working. Currently, workers are getting enough food to survive and they are treated like slaves. The camps lack any heating and cooling equipment. While workers work hard for 12-13 hours a day, they hardly find a place at the camp to sleep. In most of the refineries and facilities, there are three bathrooms in a dormitory for 100 workers. Most of the camps lack dining facilities. The boots that are given to the workers are only three to four sizes and are basically not appropriate for the workers’ feet. There are no detergents or alcohol at camps. Above all, workers’ salaries are constantly delayed despite these hardships.

The regime has appointed managers at Iran’s Oil Company that deprive workers of their basic rights. The government has officially announced that workers should deal with their managers and the contracting companies, not the government. As such it’s refusing to claim responsibility.

Besides, the Iranian regime has tried on many occasions to intimidate or bribe workers to prevent them from continuing their strikes. It has so far been able to force 60% of workers to return to their works. These workers face the same circumstances and are under pressure from their employers, while many are threatened to be fired.

Meanwhile, some official oil workers and employees went on strike.

List of workers in some centers who have joined the strike:

8- Clay and Board oil company of Fars province, Kazerun

19- Workers of Tondgovian refinery in Tehran

99- Workers of Behdad Pasargad Mine Company in Mashhad

It is worth noting that since Iran’s economy is dependent on oil, oil workers’ strikes would significantly impact Iran’s economy. In November 1978, a strike consisting of 37,000 workers at Iran’s oil refineries reduced production from 6 million BPD to about 1.5 million BPD. Hence, Iran’s economy was paralyzed and later collapsed, rendering Shah’s regime unable to fuel its oppression. It should be noted that Iran’s last monarch was not under sanctions. Accordingly, the strikes led to an increase in fuel prices worldwide and caused fuel shortages and long lines at gas stations.

The Iranian regime’s oil export is under sanctions, significantly reducing Iran’s oil export revenue. The oil workers’ strike could further reduce the regime’s revenue, which the mullahs desperately need to fuel their warmongering machine and continue oppressing the Iranian people.

Previous articleIran News in Brief – October 17, 2021
Next articleIran: Where People Sell Their Hearts Due to Poverty