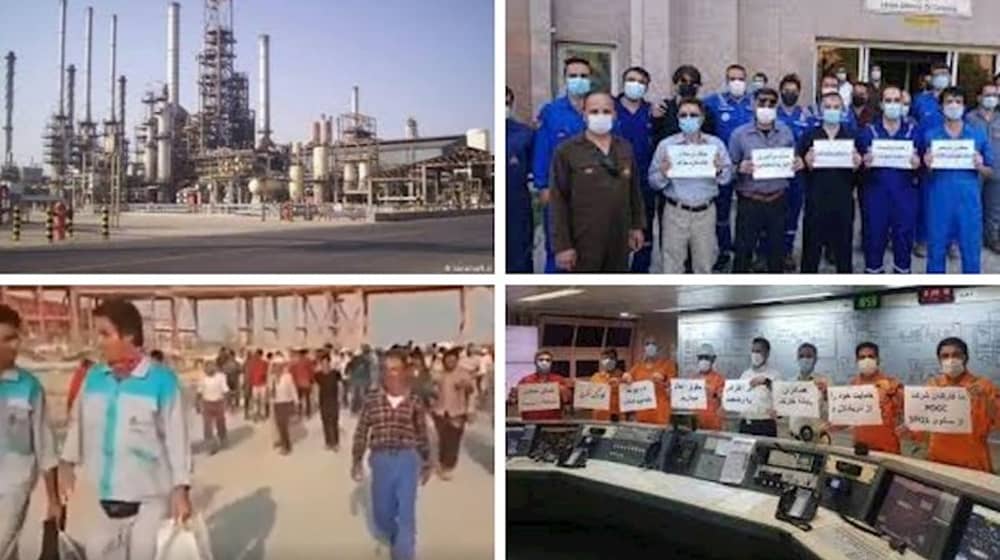 Shortly after Iran’s sham presidential election, protests by people from all walks of life started across the country.

Contract workers of Iran’s oil and petrochemical sector went on strike in several cities in Iran on Saturday, only a day after the regime’s sham presidential election. This strike soon spread across Iran, and oil workers joined their colleagues.

“We, the oil workers in refineries, petrochemicals, and power plants, are protesting against low wages, declining purchasing power, and not delivering on promises made to us. Therefore, as we had previously warned, we will restart our national strikes and pursue our demands by gathering in front of our workplaces. Our strike is a warning and will last for a week, and we will join the ranks of our colleagues (the permanent workers) who have announced their protest on June 30, 2021,” workers said in a statement.

On Monday, the workers of Exir Industry, Satrap Contractor company, and 400 workers of Phase 14 in Assaluyeh joined the strike.

These workers are protesting their low wages and demand job security. On Saturday, contract workers of the Bid Khun powerplant, Bushehr province, and the contract welding workers of Bushehr Petrochemical Company began the strike when authorities ignored their demands. On Friday, the workers of the oil terminal in Khark Island and Sina Refinery in Qeshm Island.

On Wednesday, workers at the Isfahan refinery also joined the strikes of their colleagues across the country.

Workers at Mobin Sanat, a refinery in Adish, joined the nationwide strike by oil workers. Contract workers at refineries, petrochemicals are demanding higher wages and a change in leaves.

More workers join this nationwide strike, known as the “1400 Campaign,” referring to new protests in the New Persian Year of 1400.

Mrs. Maryam Rajavi, the President-elect of the National Council of Resistance of Iran (NCRI), saluted the oil industry striking workers and called on all workers and youth to support them.

Continued protests, strikes, and uprisings by various strata of Iranian people indicate their will to overthrow the clerical regime, and establish freedom and justice in our enchained homeland. #IranProtestshttps://t.co/1KWAHquCMB

In addition to the oil workers, people from other walks of life held protests in recent days.

On Wednesday, the Sepahan Isfahan Cement Company workers held a protest rally in front of the Mobarakeh city governor’s office in Isfahan province.

On Wednesday, the Ahvaz Ramin Power Plant workers held a rally protesting their low wages and the interference of officials and high-ranking companies in the affairs of this power plant.

Again on Wednesday, Workers of the Tehran Bus Company held a protest rally in front of the municipality and the city council in Tehran to demand their rights.

On Tuesday, several pharmacists protested in front of the Ministry of Health in Tehran against the drug mafia linked to the regime’s Revolutionary Guards (IRGC).

“Ignoring the tens of millions of Iranians who did not vote or cast invalid votes is a major strategic mistake that, if sustained, could have irreparable consequences and even jeopardize the survival of the regime. The [regime] should either hear the message of this silent protest or wait for the consequences of people’s boycott of the ballot box,” wrote the state-run Hamdeli daily on Monday.