Last year, a heart-wrenching interview of a 29-year young father who wanted to sell his heart circulated on social media. This father had put an advertisement to sell his heart to ensure the future of his family.

In an interview, a so-called “buyer” asks the man: “You know that if you sell your heart, you won’t survive. Don’t you?”

“Yes, I know what would happen…. I have tried many other ways and reached a deadlock. This is the only solution to ensure the future of my children,” the man responds.  As a price for his heart, he gives one billion tomans or $367,000 with Iran’s free market’s current dollar exchange rate.

While October 17 marks the International Day for the Eradication of Poverty and many countries take serious steps toward this goal, in Iran, with its vast natural resources, Iranians are forced to sell body parts and vital organs to cover their expenses due to the rising poverty.

Selling body parts is not new in Iran. Walls across the country are covered with advertisements of people offering their organs, even vital ones such as bone marrow, heart, and cornea.

#PMOI/#MEK: People in #Iran are taking drastic measures to at least put minimal food on their tables. Selling their new-born babies or organs, while cannot afford meat, vegetables, or other staples. Child labor is becoming increasingly common. https://t.co/68iHeXpisI pic.twitter.com/LU3WRIJmyq

In an exclusive report in 2019, the Iranian Resistance underlined how selling body parts had become a lucrative business in Iran. According to the Iranian opposition, “Sellers are those in dire financial need for whom the organ market is the last resort. They are both male and female. Most of those willing to sell their kidney are young people between ages 22 and 34. But some older people want to sell their body parts too. Since organs offered by young people are not in short supply, buyers usually have no problem in finding what they want.”

“Amir, who is about 18 years old, has auctioned his kidneys due to poverty. He doesn’t want more than 500 million Rials. He says he can no longer cope with the landlord’s complaints. He and his brother have each decided to sell one of their kidneys and buy a small house with the help of a loan to relieve their mother from the suffering,” wrote the state-run Salamatnews on December 2, 2018.

What poverty means in Iran

More Iranians fall into the swamp of poverty every day as the Iranian regime continues devouring the natural resources and using them to fund its illicit activities. The poverty line in Iran varies from 10 to 15 million tomans. Meanwhile, the salary base of the Iranian workers and employees is around four million tomans.

According to the state-run Donyay-e Eghtesad on October 4, “official surveys show that the number of poor people has almost doubled from 2012 to 2019. During this period, 4 million people have been added to the poor, and the rise in poverty line has increased from 6.4% to more than 12%.”

On October 17, the state-run Mardom Salarie daily also confirmed that “Salaries are far less than the inflation rate. Thus, the large part of society, with the rising living costs and their fixed salaries, has fallen under the poverty line.”

“During the last forty years, the price index has increased about 1326 times,” wrote the state-run Etemad daily on Monday, October 11.

“A part of society hardly makes ends meet, while the elites go on luxury tours. Currently, there is no middle class in Iran. The poverty line has surpassed 11 million tomans. Evidence shows that a large part of society is below this line. Continuation of this trend divides the society into rich and poor sections. We could soon hear the breaking of poor people’s bones under this pressure,” Aftab-e Yazd daily wrote on October 6.

According to the state-run Jahan-e Sanat daily on October 2, “Iranians’ purchasing power has fallen sharply, and they are struggling to buy even the basic necessities of life, as the consumption of important food items such as meat, eggs, and dairy products on the Iranian table has dropped dramatically by as much as 50 percent.”

“The skyrocketing prices and the rising inflation rate have increased people’s living costs from 40 million tomans per year in 2018 to more than 63 million tomans in 2021,” wrote the state-run Kar-o Kargar daily on October 3.

Recently, regime officials tried to blame the increase in salaries for skyrocketing prices. Yet, according to the state-run Kar-o Kargar daily on September 21, adding “A 39% increase in salaries in 2021 will cover only 37 percent of the people’s cost of livelihoods. A worker’s salary of 4 million tomans covers only ten days of the month, and after that, the workers barely make ends meet until the end of the month. They have to remove many of the basic expenses from their lives.” 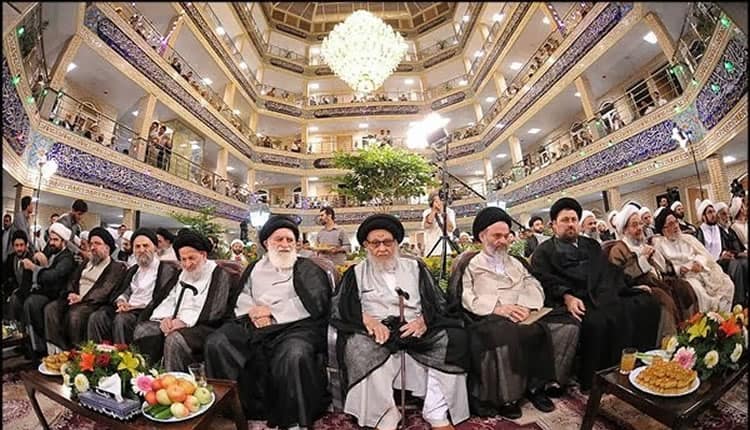 Where are Iran’s resources spent?

Iran is among the world’s richest countries in terms of natural resources. But, in an interview on September 19, 2021, with the state-run Aftab-News, Behzad Nabavi, a former high-ranking official, acknowledged that “In our country, there are four institutions which control 60 percent of the national wealth. This includes Executive Headquarters of Imam’s Directive (Setad Ejraie Farman Imam), Khatam al-Anbiya Base, Astan-e Quds, and Islamic Revolution Mostazafan (oppressed) Foundation. None of these institutions are in connection with the government or the parliament.”

In fact, these foundations are under the direct control of the regime’s supreme leader Ali Khamenei. Below are some facts about the amount of money these four institutions and their subsidiaries control:

One might argue that international sanctions have also damaged Iran’s economy. This fact could only be considered if the regime had not enough resources to address the Iranian people’s problems. Besides, sanctions are in place due to the regime’s malign activities, such as the export of terrorism. So, the regime could have all the sanctions lifted by only stopping its illicit activities.

In 2019, the United States State Department estimated that Tehran gives $700 million a year just to the terrorist Hezbollah group in Lebanon.

While the Iranian people are being crushed under poverty, Reuters reported in December 2020 that the IRGC intends to spend $600 million in Iraq to expand the holy shrine of Imam Hussain, the third Shi’ite Imam.

In other words, the Iranian regime has enough resources, even now, to address people’s problems.

#Iran: Power Outages in #WINTER, a Result of the Regime’s Plundering Policies, Especially of the Revolutionary Guards & Khamenei’s Institutions.
IRGC and Khamenei-affiliated institutions have acquired thousands of Bitcoin miners into the country.https://t.co/llzQOlfSsY

The International Day for the Eradication of Poverty on October 17 was signed in 1987 when a hundred thousand people gathered at the Trocadéro in Paris to honor the victims of extreme poverty, violence, and hunger. They underlined that poverty is a violation of human rights and affirmed the need to come together to ensure that these rights are respected. Since then, people around the globe and many governments have used the occasion to reaffirm their commitments to eradicate poverty and provide people with equal opportunities.

Yet, this has not been the case in Iran under the mullahs’ regime. People commit suicide, sell their body parts, or search for food in garbage bins. The Iranian regime is the source of Iran’s increasing poverty, and it is the regime that should be eradicated in Iran to end all miseries.

The ongoing poverty in Iran has increased society’s restiveness. The world has witnessed major uprisings in Iran in the last two years. There are ongoing protests in Iran by people from all walks of life. Thus, the people’s hatred toward the regime increases parallel to poverty in Iran and it’s upon the global community to preserve the status quo or help to change it.