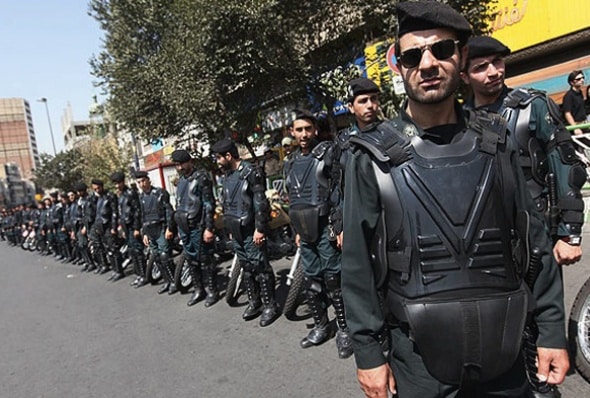 Last night, an old lady from Abadan had an interesting conversation and a fight recorded on her phone while she was courageously standing up to the State Security Force. As she walked down the street, she kept filming the oppressive security forces who were dispatched to crackdown on peaceful protesters in her city. She told them that they are all captives of this regime and that they are doing nothing for the country, other than to fatten themselves on the people’s misery.

When a bystander asked her to call “death to Abdolbaghi”, referring to Hossein Abdolbaghi, the corrupt owner of the Metropol Complex that collapsed and killed more than 30 innocent people, the brave lady replied: “Why shall I say ‘death to Abdolbaghi?’ You have to shout ‘Death to Khamenei!”

Following that conversation and repeating her slogans against the regime, she was attacked and someone was recorded trying to grab her phone.

The following scenes display the old footage with her voice saying that she was fine, but she was being attacked by one of the security guards. She goes on to explain what has happened to her and that she is determined to keep fighting and defying the riot police and the regime.

The footage, though short and unprofessional, reveals a great deal about the situation in Abadan in particular, and what is going on in Iranian streets in general:

Footage taken by an old lady in #Abadan shows her bravely challenging anti riot police and then she is being attacked when she starts chanting "death to #Khamenei" and "death to the regime". pic.twitter.com/CGCRDcyECG