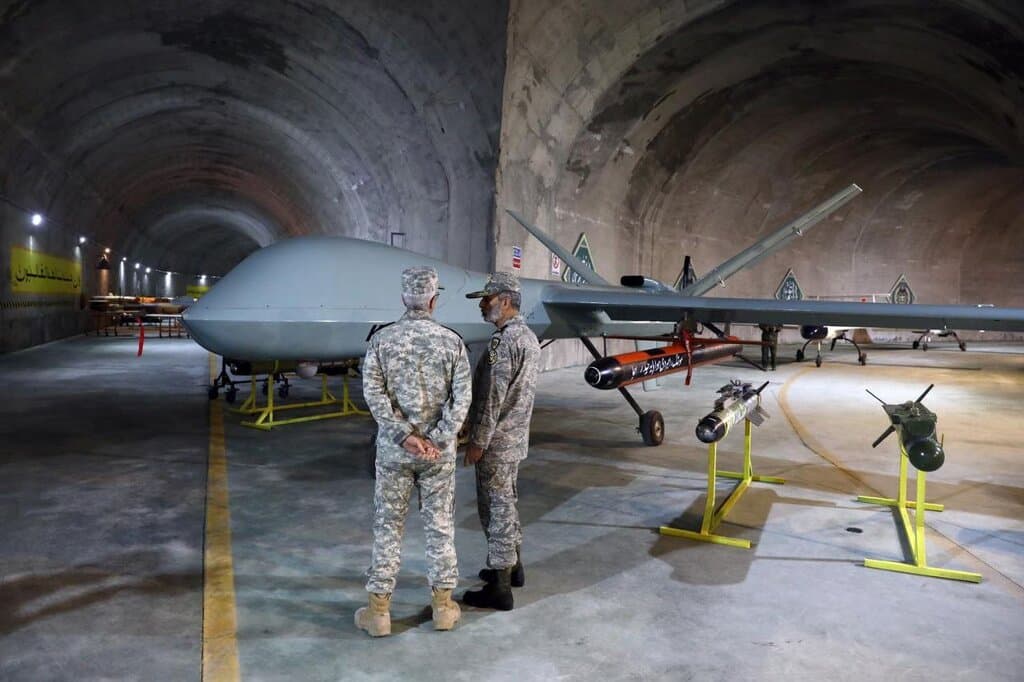 On May 27, Iran’s state TV aired a propaganda film showing its so-called “313 strategic drone headquarters.”  Tehran’s saber-rattling came amid ongoing protests in many Iranian cities and several operations against regime officials and military sites and was intended to project a hollow show of power.

These reports bragged about a drone nest “hundreds of kilometers underground.” The regime’s state TV also acknowledged this base is in “northwest Iran, and our cameraman was not allowed to enter the base.”

But some state media have criticized what they called a “clumsy” report that inadvertently “shared information about the drone headquarters whereabouts.”

“We flew from the first base of Air Force. I was not aware of the existence [of the drone nest], and they told me after a few minutes that I should continue the path blindfolded,” he boasted.

He then showed the helicopter’s flight path and said that “after about 40 minutes of flight, they reached the underground base.”

The state-run Khabarfori website criticized this report in an article, “IRIB’s Intelligence mistakes reveal the whereabouts of Army’s clandestine base.”

“There are two big mistakes in the IRIB news that have revealed the location of the base. The reporter mentions a 40-minute flight from Kermanshah Air Base to the destination, according to which the relative coordinates of the base can be found,” reads the report.

“The more significant mistake is the name on a fire extinguisher that revealed the base’s location, the city of Dalahou in Kermanshah,” the report added. In addition to the Khabarfouri website, many Iranian users on Twitter guessed the location of the UAV headquarters, given the information published by the regime.

One user underlined that based on the Bell214 helicopter’s average speed, which took the reporter to the base, “The so-called secret base is about 102 km away from the 1st Air Base in Kermanshah.”

The reporter said he had prepared this video on May 25. Yet, Photos of Bagheri’s visit revealed another error.

The photos’ metadata provided to the news agencies showed they were taken in two stages. Once, single images of the UAVs were taken on May 18. The next day, at 10:00 AM, the rest of the photos presented by Iran’s state TV were taken. As a result, the approximate time for the information to be prepared by the army’s public relations officials has been exposed. The photos’ metadata leave no doubt that the entire report was a clumsy pre-staged show.

There is a chance that the regime released this information on purpose as a part of its counterintelligence operation, especially after recent attacks on its facilities and the assassination of its top commanders.

But understanding the regime’s current situation removes any doubt that in any scenario, this saber-rattling shows the mullahs’ weakness and is a humiliating debacle.

Protests are spreading across the country due to the regime’s institutionalized corruption, ineptitude, and mismanagement. While Iranians cannot make a living, the ruling theocracy squanders billions of dollars on its warmongering and terrorism by actions such as producing UAVs.

The Iranian Resistance revealed the regime’s clandestine massive UAV program in October 2021. According to this report, “The Islamic Revolutionary Guard Corps (IRGC) Quds Force is chiefly using various unmanned aerial vehicles (UAVs) for its terrorist operations as well as for supplying its proxies in the region. To an extent, the regime is trying to compensate for its outdated and decrepit Air Force with this technology.”

The regime’s recent hollow show of power is primarily meant to boost the morale of its demoralized forces, as they see a volatile society and another uprising on the horizon. Besides, the recent attacks in the heart of the capital against the regime officials and military sites reveal the real face of a weak regime and the many cracks in its security apparatus.

Yet, as the regime sees its end near, it clings to anything to secure its grip on power. So, the threats of this wounded beast should not be underestimated. Tehran used billions of dollars it earned through sanction relief to expand its military and terrorist capabilities. Iran’s ruling theocracy has expropriated the national wealth to export terrorism and chaos abroad to prolong its life.

As the Iranian Resistance had proposed in October, “Any dealings with the regime in Tehran by all Western sides, especially after the ascendance of Raisi, must end. All activities, including production, use, and research on drones and the regime’s missile program, must be included in the demands. Otherwise, because of its severe domestic weaknesses, the clerical regime will place more emphasis on creating regional instability to buy time and preserve its rule.”