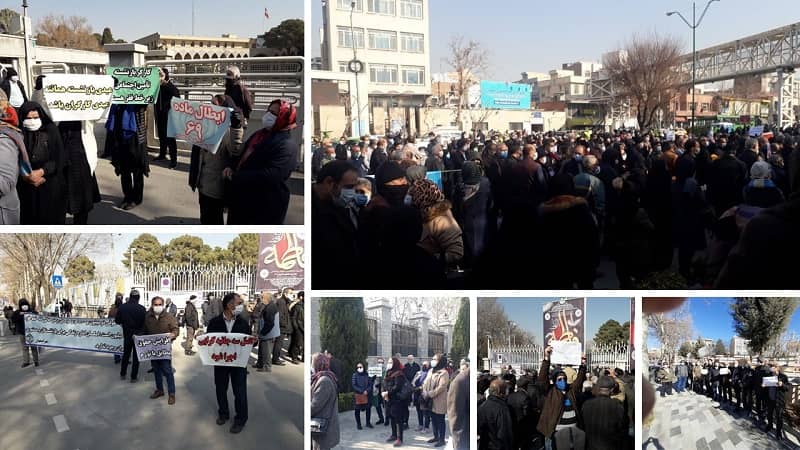 Cities across Iran have witnessed numerous protests by all walks of life within the last few days, according to reports tallied by the People’s Mojahedin Organization of Iran (PMOI/MEK).

Ranchers in Golpayegan, Isfahan province, gathered on Monday to protest the improper distribution of livestock input. “To date, [the authorities have not] solved our problems and made empty promises to ranchers. They have not taken any action. We have to come here every day, but there is no one to answer us,” one of the protesters said.

On Monday, members of Tehran University Housing Cooperative held a protest in front of the Ministry of Cooperation. For nearly 20 years, they have given their hard-earned funds to this housing cooperative in the hope of becoming homeowners, but there is still no news of their houses.

On January 11, staff of a private health complex in Eastern Azerbaijan province held a rally in front of the governorate and demanded the governor address their problems.

Truck buyers from the state-controlled Saipa Company held a rally in front of the regime’s parliament on Monday. They protested the non-delivery of the vehicles they had paid for, and the complicity of Alireza Razm Hosseini, the Minister of Industry, Mines and Trade, in this explicit scam.

On Sunday in Arak, central Iran, workers of HEPCO, once one of the largest construction equipment manufacturers in the Middle East, held a rally demanding their delayed paychecks for months.

On Friday, the regime’s Supreme Leader, Ali Khamenei, banned the entry of credible Covid-19 vaccines from the United States and the United Kingdom.

On Sunday, a group of doctors and health professionals held a gathering urging the regime’s officials to purchase credible vaccines.

On January 10, hundreds of caretakers and public-school janitors gathered in front of parliament to protest their poor living conditions and low salaries. The protesters said that their average salary is 2.8 million tomans, which does not cover their living expenses.

On November 25, Sara Fallahi, a member of the regime’s parliament, warned about an “unbridled market” that has driven the poverty line above 100 million rials.

“If we look at the people’s purchasing power, it is at its lowest level in the past 40 years, and they are fed up,” said Hossein Raghfar, one of the regime’s economists, on January 7.
The regime’s economic mismanagement coupled with its inhumane coronavirus policy, which has so far claimed the lives of over 200,000 Iranians, have increased the society’s restiveness.

The nightmare of the major Iran protests in November 2019, which initially started due to economic reasons, still haunts the regime’s leaders. Despite the regime’s oppressive measures, protests in Iran continue, indicating Iranians consider the regime as the real source of all economic and social problems.

The ongoing protests in Iran are signs of a looming uprising. Officials know that since these people have already lost everything due to the regime’s policies, they have nothing else left to lose.

The state-run media describe the society as an active “volcano” that the regime would not be able to control once it erupts.