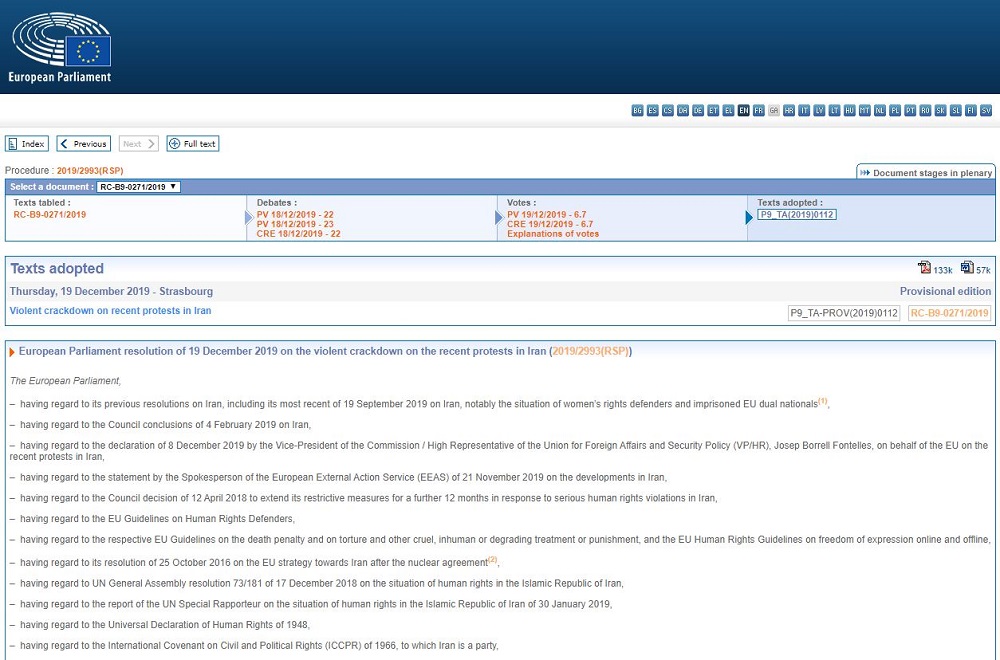 The European Parliament adopted a resolution on Thursday, condemning the Iranian regime’s deadly crackdown on the Iran protests.

Members of the European Parliament called on the United Nations, particularly its Human Rights Council, to “trigger without delay a comprehensive investigation on the events that have taken place in recent weeks, led by the UN Special Rapporteur on the situation of human rights in Iran, with the aim of shedding light into the allegations of grave human rights violations in the country since protests begun, and calling on Iran to give full and unrestricted access to those conducting this inquiry.”

Mrs. Maryam Rajavi, President-elect of the National Council of Resistance of Iran (NCRI), welcomed that European Parliament resolution, saying in a Tweet that the EU, five of whose member states are in the UN Security Council and 10 of them are members of the UN Human Rights Council, must take immediate action to expedite these investigations by the UN.

Mrs. Rajavi continued: “Not only the Iranian regime will not heed the EP’s legitimate demands which are the same as the Iranian people’s demands, but will continue its crimes, making it imperative to pull the trigger of UN Security Council sanctions.“

Polish lawmaker Anna Fotyga, on behalf of the European Conservatives and Reformists Group, on Monday proposed a motion at the European Parliament on the Iranian regime’s slaughter of defenseless protesters.

Polish lawmaker @AnnaFotyga_PE, on behalf of the European Conservatives and Reformists Group, on Monday proposed a motion at the @Europarl_EN on the Iranian regime’s slaughter of defenseless #protesters.https://t.co/oqtKxx9v6g #IranProtests #StopIranBloodshed

“We already know that around 1,500 people have been killed in Iran during the recent crackdown,” said Ms. Fotyga, a member of the Parliament’s Foreign Affairs Committee and a former Foreign Minister of Poland.

The EP resolution pointed out: “Thousands of people from all over Iran and representing all segments of society have exercised their fundamental right to freedom of assembly and expressed their economic grievances over the increase in fuel prices of at least 50 % in the largest scale unrest in 40 years.”

The European Parliament also referred to the regime’s courts and how they “Regularly fail to ensure fair trials, with the denial of access to legal counsel and denial of visits by representatives from consulates, the UN or humanitarian organizations, and permit the use of confessions obtained under torture as evidence.”

The resolution states that the European Parliament extends its condolences to the families of the victims of the crackdown on the Iran protests and wishes a speedy recovery to those injured.

The MEPS deplored the “widespread and disproportionate use of force by Iran against non-violent protesters who were merely exercising their rights to freedom of expression, association, and peaceful assembly.”

They stressed that such actions are “unacceptable,” and it urged the Iranian authorities to announce the total number of deaths and detainees, conduct a prompt, impartial, independent and transparent investigation into allegations of excessive use of force, including direct targeting of protesters by security forces, and hold all perpetrators of violence accountable.

The resolution further demanded that all protesters, human rights defenders, and journalists currently held under arrest in Iran for exercising their legitimate rights to freedom of expression and assembly are freed unconditionally; moreover, demanded that the authorities inform all families of the location of their detained relatives, and called for granting unhindered access for lawyers and international observers to all those detained during the protests and for providing identity of the detainees to the international community.

The European Parliament furthermore “strongly condemns Iran’s decision to shut down internet access to global networks, which prevented communication and the free flow of information for Iranian citizens; underscores that such actions are a clear violation of the freedom of speech; urges the Iranian authorities to lift all online-based communications and services blockages.”