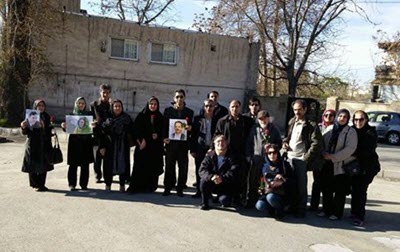 NCRI – A group of Iranian mothers and family members of political prisoners and their supporters gathered outside Tehran’s notorious Evin Prison on Sunday, which marked the Iranian New Year, to spend time near their loved ones.

The regime’s security forces attacked and beat up the families to force them to disperse.

The father of Atena Faraghdani, a young female cartoonist detained in Evin, was among those who were beaten up, according to the Women’s Committee of the National Council of Resistance of Iran (NCRI).

Atena Farghadani was first arrested in August 2014 for drawing a cartoon depicting the Iranian regime’s parliamentarians as animals who ratify misogynic laws. This cartoon was published after laws were adopted to increase the population as envisioned and ordered by the regime’s supreme leader. She was released two months later on bail. After her release, she posted a video on YouTube in which she described mistreatment and aggression against women in the regime’s prisons.

Ms. Farghadani was once again arrested in January 2015 on the charge of “assembling and collaborating against national security”, “propaganda activity against the system” and “insulting the supreme leader, President, parliamentarians, and agents in IRGC Ward 2A during interrogation” and was condemned to 12 years and 9 months in prison. She won the “Cartoonists Rights Network International” Award for Courage in Editorial Cartooning on September 5, 2015.