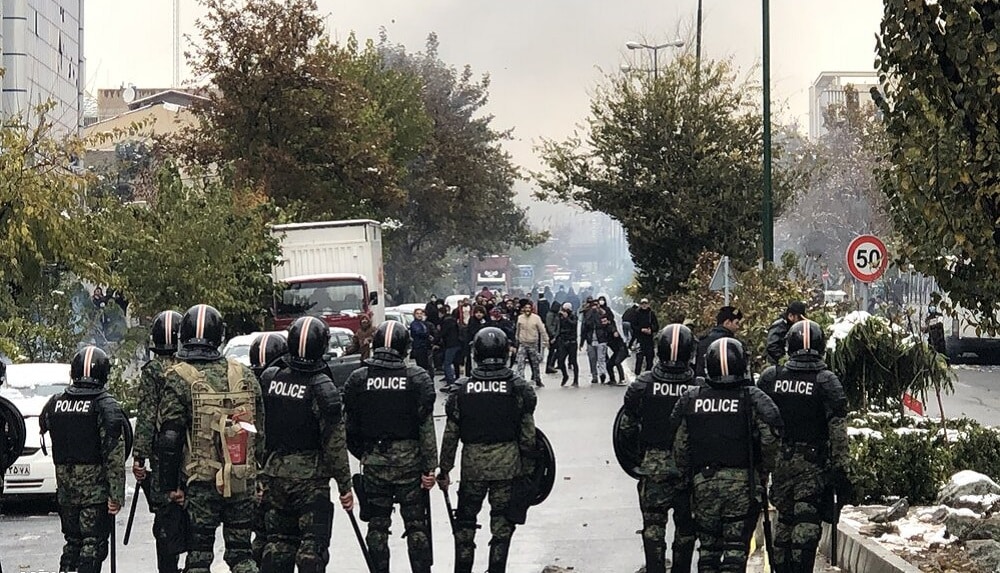 On September 29, based on the information gathered from its network inside Iran, the People’s Mojahedin Organization of Iran (PMOI/MEK) announced that “the number of people arrested during the nationwide uprising has exceeded 15,000”. Publicizing the names of seventeen new martyrs, the organization also added that 300 protesters were killed in 164 cities across Iran.

According to the PMOI, the report is merely an understatement, as the organization has to verify and confirm the count through multiple sources to avoid the Iranian regime’s eventual propaganda campaign. But still, it is far off from the official acknowledgment of the state media and officials.

According to official sources, at the time of this writing, the Iranian state security forces have announced arrests of about 1,800 protesters. Those accounts only stem from provinces like Gilan, Golestan, Mazandaran, Tehran, Ilam, North Khorasan, Qom, Semnan, Zanjan, Hamedan, Bushehr, and Hormozgan, leaving out nineteen more provinces.

According to the PMOI network inside Iran, more than 25 different flashpoints were reported throughout the country’s capital, whereas state media only acknowledged detentions from two towns near Tehran.

Reports of the arrests made public by various state officials are as follows. The report and the official given figures will be updated accordingly.

The state-run Tasnim news agency reported from Zahedan: “The Sistan and Baluchistan Police Commander Ahmed Taheri announced the arrest of 57 people who were involved in the destruction of public property in Zahedan.”

In an interview with the official news agency IRNA, Vahid Mohammadi, the governor of Gilanegharb in Kermanshah province said: “This evening, two counter-revolutionary elements who were related to foreign agents and intended to create insecurity against national security under the guidance of counter-revolutionaries abroad, were arrested through the monitoring and timely action of the incognito soldiers of Imam Mehdi.”

The IRGC Intelligence Organization of the Golestan province announced in a statement: “Twenty-three elements were arrested in this province in recent days for writing slogans (graffiti) and disrupting security.

Akbar Purat, the deputy governor of Bushehr province told the state-run Tasnim news agency: “In the riots of Bushehr, 200 people have been arrested so far.”

Entekhab Online: “Chief Justice of Lorestan announced the arrest of 120 people in recent incidents in Lorestan. Stressing that the punishment of these people will be executed decisively, Mohammad Razm said: ‘These people have many accusations, they have been charged and appropriate orders have been issued for them.’”

Mehr news agency (MOIS-run): “In an announcement, the IRGC Quds Intelligence Organization of Gilan province announced the identification of two organized teams in the recent riots in Rasht as well as the arrest of 12 people.”

NedayeTajan Online: “According to the report of Nedaye Tajan, quoted by IRNA, the public relations of the Mazandaran (province) judiciary, Mohammad Karimi, said that 450 rioters were arrested during the riots of the last few days in the province.

Javan Online: “An informed source announced the arrest of 8 leaders of the recent riots in Eslamshahr city.”

Tasnim news agency (IRGC-QF-run): “The governor of Ilam announced the arrest of 186 rioters in Ilam and said: ‘There will be no appeasement with the rioters who have disturbed the security of the province.’”

Hamshahri Online: “In an announcement, the IRGC Intelligence Organization of North Khorasan province announced: ‘In order to maintain the public security of the province and with the cooperation of the revolutionary people, 8 rioters and troublemakers were identified and arrested in recent days.”

Mehr news agency (MOIS-run): “According to the Mehr news agency, citing the IRGC public relations department in Qom province, in order to maintain the public security of the province, the IRGC intelligence organization cooperated with the revolutionary people of Qom, in identification and arrest of 6 rioters and troublemakers in recent days.”

FardaNews Online: “Before taking any action, 4 of the leaders of Zanjan riots, who were planning to carry out sabotage operations, were arrested by the IRGC Intelligence Organization in Zanjan province.”

Mehr news agency (MOIS-run): “The police commander of Gilan province announced the arrest of 739 rioters in the province and stated: 60 of these people were women who were arrested by the police and the IRGC. A large number of these people were not natives of Gilan and had come to Gilan from other provinces to create chaos and damage public places and private properties.”

ISNA news agency: “Political, Security and Social Deputy of Hormozgan Governorate said: ‘88 people have been arrested during the riots in Hormozgan.”

Mashreq News: “The leaders of the riots in Pakdasht city (Tehran province) got arrested. According to Mashreq, citing an informed source, a number of leaders of the riots and insurrections of recent days were arrested last night thanks the intelligence monitoring and efforts of the police forces and the unknown soldiers of Imam Mahdi as well as the IRGC Intelligence Organization. This knowledgeable source said: ‘In addition to the leaders of creating insecurity, about 40 people who played a role in the destruction of the public property were arrested, and the process of arresting and identifying other agents continues.”

The last thing the United States should be doing is negotiating a nuclear deal with a terrorist regime.

I spoke with @Maryam_Rajavi and expressed my support for a free and democratic Iran.

The uprising that spread over more than 163 cities and all 31 provinces has rattled the entire ruling establishment and many officials have either called for a full-fledged crackdown or expressed concerns about the fate of the clerical regime.

Given the all-time high international isolation of Tehran, the regime is trying to hide the true figure of those protesters who are currently lingering and under torture in hundreds of prisons and safe houses across the country.

The United Nations Commissioner of Human Rights and the UN Special Rapporteur on Human Rights in Iran must launch a mandatory inquiry to investigate the political prisoners’ whereabouts inside Iran. The Aban Tribunal that was held in London in early 2022 shed light on a very small part of the crimes against humanity that found a place in the regime’s dungeons following the November 2019 Uprising.

Inaction or firm undertaking will set a precedent for Tehran as for other dictators around the world who continue to violate basic human rights and deprive their nations of freedom and democracy. The world is watching, as are thousands of families of the arrested protesters inside Iran.

The nationwide #Iranprotests have expanded to 164 cities. Over 300 have been slain, and at least 15,000 arrested. The clerical regime is trying in vain to extinguish the flames of people’s fury. Its deadly clampdown only adds to the determination of Iranian youths. pic.twitter.com/txpHZCjq2T