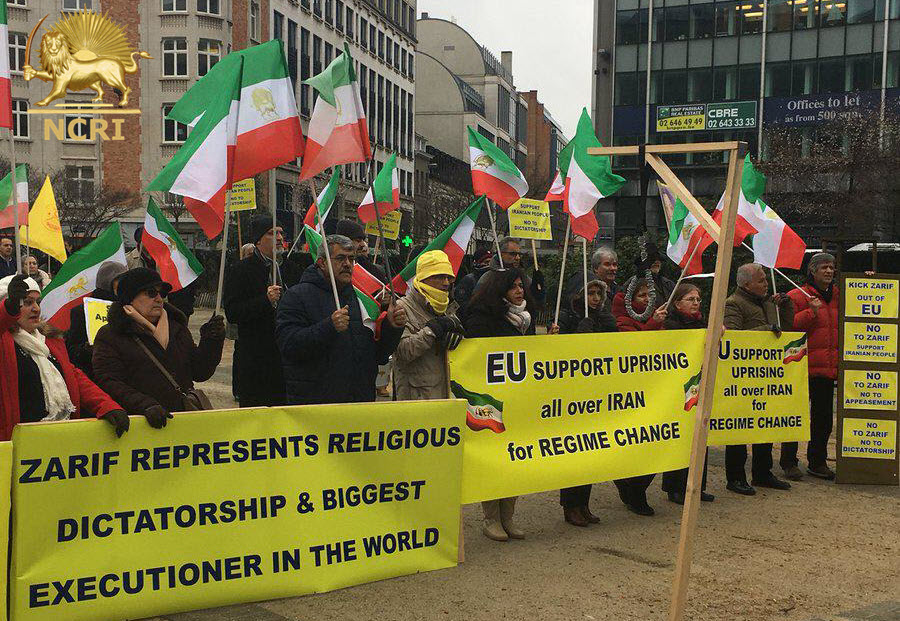 Javad Zarif, the Foreign Minister of Iran’s ruling religious dictatorship is scheduled to meet Federica Mogherini in Brussels on Thursday, January 11. The meeting coincides with the start of the third week of the Iranian people’s uprising. In the past two weeks, Iranians have protested in more than 140 cities and towns throughout Iran, chanting “death to Khamenei”, “death to Rouhani”, despite suppressive measures in violation of international human rights standards.

Under these conditions, receiving and meeting with the mullahs’ envoy under any pretext and any excuse is simply despicable and shameful. This is an obvious trampling on human rights values and a contravention of EU claims to the defense of human rights.

Any dialogue with the clerical regime that the Iranian people seek to overthrow, without public and unconditional condemnation of its crimes and support for the Iranian people’s rights for freedom of expression, freedom of association, and the right to regime change in practice is tantamount to complicity with the regime in its crimes.

If Ms. Mogherini and her colleagues have the least respect for Universal Declaration of Human Rights, they should publicly and unequivocally express support for the Iranian people’s legitimate demand to put an end to the religious dictatorship and to condemn suppression of the protests and murdering the prisoners under torture.

Javad Zarif’s mission over the years has been to justify the mullahs’ crimes and their war-mongering in the region. He has repeatedly met and supported notorious terrorists such as Hassan Nassrallah, the Secretary General of the Lebanese Hezbollah, Imad Mughniyah, the head of the military wing of Hezbollah who personally commanded a number of the bloodiest terrorist operations of the Hezbollah. Zarif has met and heaped praise on Bashar Assad, the murderer of the Syrian people on a number of occasions.

The Iranian people by chants such as “No to reformer, no to hardliner, this game is over,” have clearly shown that they recognize no difference between the regime’s two factions and are determined to overthrow the regime in its entirety.

Foreign Affairs Committee of the National Council of Resistance of Iran
January 11, 2018

Previous article
Statement by the Press Secretary on Iran Protests
Next article
The Number of Detainees During Uprising Is at Least 8,000