Iran: People Beaten by Police, While Trying to Prevent Their Houses From Being Destroyed 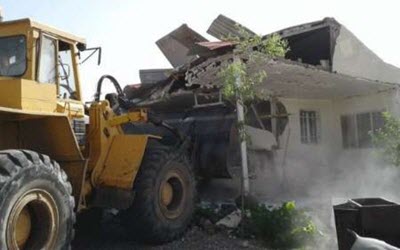 NCRI – According to reports, the residents of a settlement in Karaj – Western Tehran clashed on Monday November 14 with about 2,000 of municipal agents accompanied by law enforcement and Special Forces who attempted to destroy the residents’ houses, under the pretense that these buildings pose environmental and health threat to citizens.

The residents in the area say that at 4 am on Monday November 14, the municipal guards accompanied by the law enforcement forces raided the settlement located in Karaj’s Sarkhe Hesar district and clashed with the residents.

A number of residents were wounded during the clashes, with one of them dead, according to eye witnesses.

One of the residents of the settlement said that “It was 4 in the morning when they attacked us, crushing all the resident’s cars and beating them. The Special Forces were accompanying the municipal guards. They had brought 40-50 busses with which to take the residents away. Following the clashes, the wounded were taken to hospital.”

Another resident says: “I was admitted to the ophthalmology department of Imam Hossein Hospital because of a severe blow to my eyes.”

“I don’t know the exact number of wounded. Some of the wounded were taken to Imam Hospital while me and one other person were brought here to Imam Hossein Hospital”, he added.

The settlement’s resident said that “a 50-year-old man was among the wounded who was unconscious due to the severity of his injuries. His head and his face were completely covered in blood and I don’t think he’s still alive.”

The residents of the settlement say that “2,000 agents showing up at 5 in the morning show that they’ve had no warrant for evacuation.”