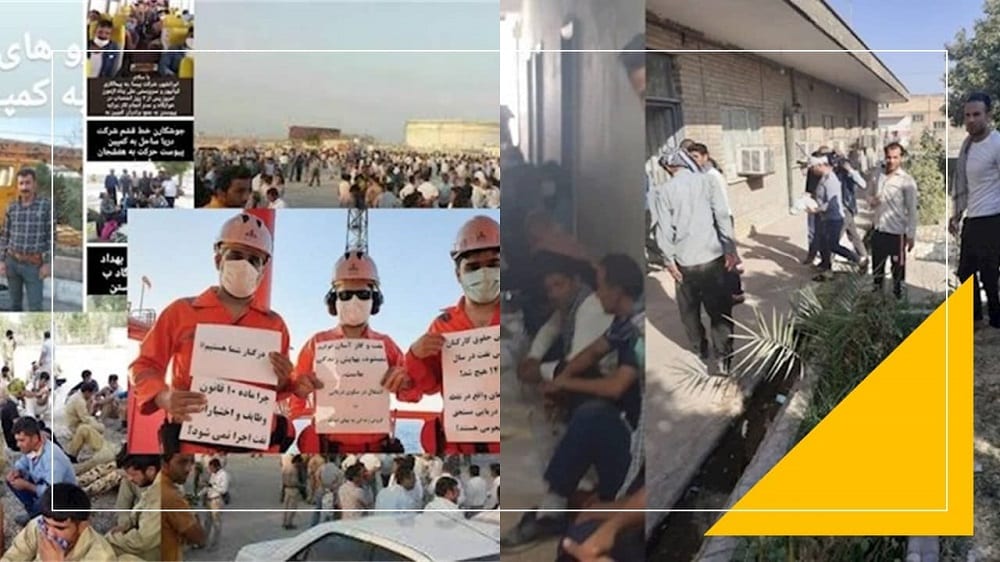 In recent days, Iranians have been protesting from all walks of life, prompting state media to warn officials of another nationwide uprising coming after these protests.

In recent days, many Iranians held protests due to the extensive blackouts. According to reports tallied by the People’s Mojahedin Organization of Iran (PMOI/MEK), dozens of Iranian cities witnessed protests as the blackout continue disrupting people’s lives.

In different parts of Tehran, including Tehran Pars and Baharestan, people were heard chanting “Down with Khamenei” and “Down with the dictator” and “Down with the Islamic Republic,” calling for the ouster of the ruling theocracy and its supreme leader Ali Khamenei. These nightly protests are going on in Iran.

In Eslamshahr, near Tehran, the people held rallies protesting the blackouts. The protesters blocked roads and demanded the regime adjust its policies.

According to MEK, “as soon as electricity goes out, the people start chanting anti-regime slogans. These rallies took place in Shiraz, Karaj, Rasht, Khorram Abad, and other cities.”

These extensive blackouts are due to the regime’s mining of cryptocurrencies to circumvent sanctions, exporting electricity to Iran’s neighboring countries, and the regime’s negligence in addressing infrastructure damages of Iran’s electricity.

On Wednesday, locals in Fasa County in Fars province held a rally in front of the governorate, protesting the extensive power outage. Instead of answering people’s demands, the regime’s criminal governor attacked and started beating a woman.

In Khuzestan, farmers protested power and water cutoffs, which have destroyed hundreds of acres of land. According to reports by the MEK, “The farmers entered the offices of the water and electricity organization and held a sit-in inside the building.”

On Wednesday, a group of Haft Tappeh sugar cane company workers in Shush, Khuzestan province, held their protest for the eleventh day. These workers are protesting the company’s policy to avoid renewing their contracts or providing them full-time employment.

Most importantly, Wednesday marked the 19th day of Iran’s oil and petrochemical contract workers’ strike. These workers are demanding higher wages adjusted to the amplifying inflation rate and protest lack of job security and safety despite doing hard work.

On Wednesday, cattle ranchers and farmers in Isfahan gathered to protest in front of the governor’s office. Farmers rallied to protest the denial of their rights to water because of the diversion of the Zayandeh-Rud River; the cattle ranchers were protesting the high cost of cattle feed and raising livestock.

Cattle ranchers and farmers in Isfahan gathered to protest in front of the governor’s office. Farmers rallied to protest the denial of their rights to water because of the diversion of the Zayandeh-Rud River; the cattle ranchers were protesting the high cost of cattle feed and raising livestock.

“In an angry society, there is nothing but destruction, and the authorities should be afraid that this anger will spread. When people are deprived of their rights, normally they get angry,” wrote the state-run Aftab-e Yazd on Wednesday.

“Our society is angry, and this is a great warning to the officials who are causing a great deal of this social anger. The depth of the tragedy is too deep to be solved with the apologies of the officials. Our people know and understand that governments have not invested in the development of society all these years. Our people know that inefficiencies and mismanagement are the cause of today’s problems, and this makes them angry,” Aftab-e Yazd adds.

In an article titled “People are much sadder than they were in 2019,” Hamdeli daily on Wednesday warned regime officials of another uprising, on a much larger scale of the major Iran protests in 2019, which rattled the regime’s foundations.

“People today are much sadder than they were in 2019. They are tired, frustrated, and even angry due to the skyrocketing living costs, the difficult living conditions, and the Covid-19 outbreak. It is enough to look at the number of protest rallies and strikes in the last few months, and the diversity and variety of issues people have protested. Protests to power outages started while it has not been long since the workers of refineries and petrochemical industries went on strike, the farmers of Isfahan protested the lack of water, the farmers protested against the lack of livestock inputs, the teachers, the retirees, and the defrauded stock market investors,” Hamdeil wrote.

“If the situation continues like this, it will not end in a simple protest to the power outage, and the scope of the protests will expand to political and security dimensions. It will be wise for the high-ranking state officials to flashback to the Dec. 2017 – Jan. 2018 protests as well as the November 2019 protests against the high price of gasoline, and after reviewing it, judge whether the people’s patience had run out more then or now?” Hamdeli adds.