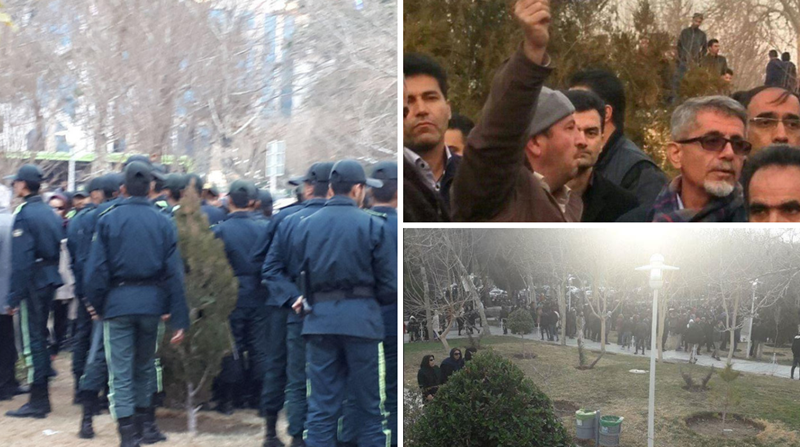 Iranian security forces have attacked a peaceful gathering of hundreds of protesters, including many teachers, near the Zayanderud River in Isfahan.

The protesters had come out to demand that the Iranian Regime not continue to divert the Zayanderud’s water to other areas of Iran; a practice that has left the river completely dry.

The Iranian Regime had previously opened the water flowing into Zayanderud on a temporary basis, following hundreds of similar protests by Isfahan farmers who depend on the river to raise crops to feed the people. This was met with celebration by the local people, who posted videos on social media of water flowing under the Khaju Bridge after nine years of a dry riverbed. In the videos, people were rejoicing and one man even kissing the ground in joy.

But this was only temporary, so the protesters came out to demand that the Iranian Regime make it permanent. The protesters chanted slogans like:

• “A nation has never seen such injustice”

• “Teachers would rather die than face dishonour”

• “Our enemy is right here; they lie when they say it’s the US”: This is believed to mean that the Iranian people see the Regime as their enemy, rather than America.

According to reports, many of the protesters were Isfahani teachers who had encouraged others to join the rally. Photos from the protest show the teachers holding up pictures of jailed teachers demanding their release. (Iranian teachers have been holding mass protests over working conditions and poor pay over the past few months. Many activists and leaders have been arrested.)

The security forces reacted to the peaceful protest in the same way that they react to any peaceful protest: violence. The forces used tear gas and pepper spray to disperse the crowds, but the protesters chanted “Don’t be afraid, we’re all together” and “We are teachers, not criminals” in response.

The Iranian Regime is terrified of any kind of peaceful protest because of fears that any large gathering will grow into an anti-regime rally.

Since December 2017, an anti-regime uprising has rocked Iran and challenged the mullahs’ shaky grasp on power. The mullahs launched a mass crackdown in response, arresting over 8,000 people in a matter of days, killing dozens, and several protesters died under suspicious circumstances in prison.

Still, the Iranian people have continued their protests, calling for regime change, even though advocating for it could cost them their lives.