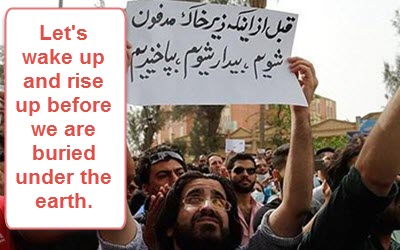 NCRI – According to reports received on the evening of Saturday February18, despite all the police warnings, people of Ahvaz were back into the streets for the sixth consecutive day, protesting against air pollution and water and electricity’s nonstop cut – offs.

On the other hand social networks users published images of riot police and troops who were transferred to Ahvaz from neighboring cities to suppress the protests.

The security force of Khuzestan province also issued a statement and threatened people that if they stage protest gatherings, rallies or demonstrations without prior permission they will be dealt with.

Over the past week, the city of Ahvaz and other cities in Khuzestan Province held many protest rallies and demonstrations.

It is noteworthy that, frightened of these protest rallies expanding, the Iranian regime has dispatched anti-riot and the Revolutionary Guards’ Basij militia groups from neighboring Fars Province to Ahvaz, and meaningfully lowered the internet speeds in Ahvaz to prevent the uploading of any video clips showing people’s demonstrations and protests.

The following video clip reflects the remarks of MEK spokesman Shahin Gobadi, about continuous protest gatherings and demonstrations of people in Ahvaz.

Following water, electricity and communications services facing shortages and cut-offs in Ahvaz and 11 other cities of Khuzestan Province due to dust storms from January 28 onward, on Thursday and Friday all cities of Khuzestan continued to witness major power outages. Also on Saturday, dust covered all these cities, causing closure of schools and universities in 20 cities.

On Thursday, February 16, a number of intelligence elements and plainclothes agents viciously attacked hundreds of people rallying in Tehran’s Vanak Square in support of Khuzestan protesters. Four women were arrested.

“I’m just a worker and [doctors] had to remove fluid from my chest twice due to the dust filling my lungs,” regime’s media quoted one of the protesters. “My grandchild, wife and I are all suffering from respiratory diseases; when the storm hits the city we have to shut the windows and draw the blinds and can’t leave the house for some days and we feel like prisoners who live in small and dark cells,” said another protester.

“Once the storm strikes Ahvaz becomes like a haunted city, we don’t have access to phone or internet due to power cut and we can’t get any news,” another citizen complained.

It’s been years that dust storms sweeping across western and southwestern Iran has disrupted life in an unprecedented fashion, closed down schools and government offices, brought flights to a standstill and provoked protests due to negligence of regime’s officials who have not taken any precautionary measures and have not initiated any plan to control and reduce the damaging effects. Suffocating dust is reported to be 66 times above the healthy level as the storm break in the city.

Although some of the dust storms originate from hotspots located in Iraq some believe that despite what Department of Environment claims about Hour-al-Azim wetland restoration the wetland is almost dried up due to plundering policies of regime in oil extracting activities in the region.