Iran: the Inspiring Message of the Freed Political Prisoner 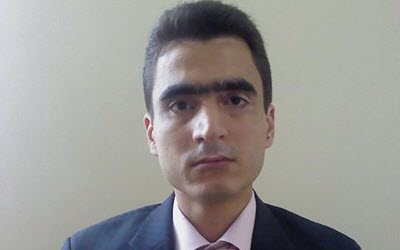 NCRI – Shahin Zoghi Tabar, was arrested on May 20, 2013 by the Revolutionary Guards Intelligence Division for supporting the People’s Mojahedin Organization of Iran, he has given an account of what he has been through during his detention and has called on Western government to stop the policy of appeasement in regards to the Iranian regime.

The following is an excerpt of his message shortly after being released from the prison.

I was arrested on May 20, 2013 by the Revolutionary Guards Intelligence Division for supporting the People’s Mojahedin Organization of Iran and spent a year and a five days in detention center 2A. I was sentenced to five years and sent to Evin and then Gohardasht prisons. I was repeatedly interrogated and tortured by Ministry of Information agents and the agents of 2A detention center. Two of my teeth were broken and my skull was fractured, but this doesn’t matter because it is the price we have to pay for freedom. I know some people who were in solitary confinement and tortured for five years.

Experiencing the tortures and interrogations, I learned of the immense fear the torturers and interrogators have of the people and their uprising. On February 6th, following my interrogation I was sent back to Gohardasht prison. After two hours of waiting in the hall they called me and informed me that Ziaei, the interim prison warden wanted to see me. When I went downstairs they informed me that I was free to go, and I did not have the chance to go back to my cell. They put me in an ambulance and let me out on the streets in Karaj. I had no knowledge of the city and it took me a while to find my way back home.

Given my unexpected release I did not have the opportunity of saying goodbye to my compatriots in prison, and I’d like to take this opportunity to call on Saeed Masoori, Javad Fouladvand, Pirooz Mansouri, Mohammad Amir Khizi, Afshin Baimani, Hasan Sadeghi, Paiam Shakiba, Majid Asadi, Amir Ghaziani, Hamzeh Darvish, Abrahim Firoozi, Jafar Eghdami and everyone else who I missed and tell them I wish them the best and hope to see them in the free Iran of tomorrow.

I’d also like to mention Mr. Ali Moezi whom I shared a cell with for a short time and learned a lot from. I’d like to tell Arash Sadeghi “job well done” and wish the best for him and his wife Gorokh Irani along with Arena Daemi and Soheil Arabi. Definitely the end of this regime is in sight and I wish them success in their endeavors.

I’d also like to remember Shahrokh Zamani, whom I had the honor of spending a short time in prison with before he was martyred. Also, Shahram Ahmadi and other Sunni friends who were executed together by Ministry of Information agents. Their memories will always live on.

I’d like to take this opportunity to have a talk with our people from all walks of life – students, engineers, lawyers, workers, and physicians who are all under pressure – and tell them that the regime is the source of all our problems.

On the streets you rightly chanted “hardliners, reformists, the game is over”. To cover its repression inside the country, the regime is involved in the affairs of other countries in the region such as Syria, Iraq, and Yemen, and it continues its support of the bloodthirsty dictator Bashar Assad. The best way is to use all available opportunities and it does not matter if it is February 11th, Labor Day, or Student’s Day. By forming resistance cells we have to be ready for every situation in any place, to make sure that this regime will not see its 40th anniversary.

I hereby call on Western governments to stop the policy of appeasement in regards to the Iranian regime. Indeed a free and democratic Iran will be much more beneficial to the people of the region and the world. Finally, I’d like to commemorate the martyrs of the resistance and the uprising, especially the martyrs of the 1988 massacre whose blood has surely given me the courage to speak in front of this camera.