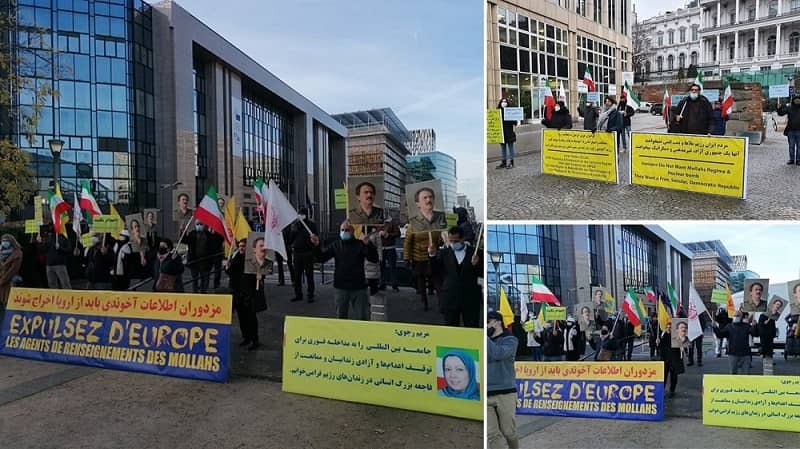 Supporters of the People’s Mojahedin Organization of Iran (PMOI/MEK) and members of the Iranian diaspora in Europe held a rally today in Vienna, and Brussels. They protested the supposed meeting of the Iranian regime’s Foreign Ministry with the Joint Commission of the Joint Comprehensive Plan of Action (JCPOA) on December 16.

The meeting normally takes place in Palais Coburg in Vienna. Due to the coronavirus pandemic, this year’s meeting will be held virtually. Nevertheless, Iranians staged a protest.

“The important thing is that the idea of mending fences with a terrorist regime is still there. Individuals don’t count, the nature of this regime is terrorist, and it is a bad idea to deal with terrorists,” the protesters highlighted.

This meeting comes in the wake of the recent trial of Iran’s incarcerated diplomat-terrorist Assadollah Assadi, who is the third secretary at the regime’s embassy in Vienna. Assadi acted on the direct orders of the regime’s officials, particularly Foreign Minister Mohammad Javad Zarif, who facilitated Assadi’s attempt to bomb the opposition rally in 2018 in Paris. Prosecutors at the court in Antwerp, Belgium, where Assadi and his three accomplices went on trial, have demanded a 20-year sentence for Assadi.

While underlining the regime’s foiled bomb plot in 2018 and Assadi’s role, demonstrators demanded European countries shut down the Iranian regime’s embassies across Europe and expel the mullahs’ agents from the European Union member states.

Participants in Wednesday’s rally also underlined the Iranian regime’s violations of the JCPOA, the military dimensions of its nuclear program, keeping nuclear sites secret, its ballistic missiles program, its behavior as the leading state-sponsor of terrorism, particularly in Europe, and its blatant violations of human rights in Iran.

Protesters criticized the European Union External Service (EEAS) for ignoring the EU’s most recent decision to prevent genocide and impunity in dealing with a regime that continues human rights violations and committed a crime against humanity in 1988 by massacring over 30,000 political prisoners. Recently seven United Nations Special Rapporteurs underlined that the 1988 massacre “may amount to crimes against humanity” and signaled their support for an international investigation into this crime against humanity.

Simultaneously, Iranians in Belgium, supporters of the National Council of Resistance of Iran (NCRI), held a protest rally in Brussels in front of the European Union. Protesters urged the EU to stop appeasing the mullahs’ regime and hold the clerical regime to account for its domestic human rights violations and export of terrorism abroad.

Protesters called on the European Union to make all relations with the regime contingent upon stopping human rights violations and terrorism.

“We call on the European Union to stop its policy of appeasement of the mullahs’ regime in Iran. The EU should shut down the regime’s embassies, which are centers of terrorism and espionage. The EU should take these measures because the regime continues executions, torture, repression, terrorist operations, and enriching uranium for obtaining a nuclear bomb,” they reiterated.