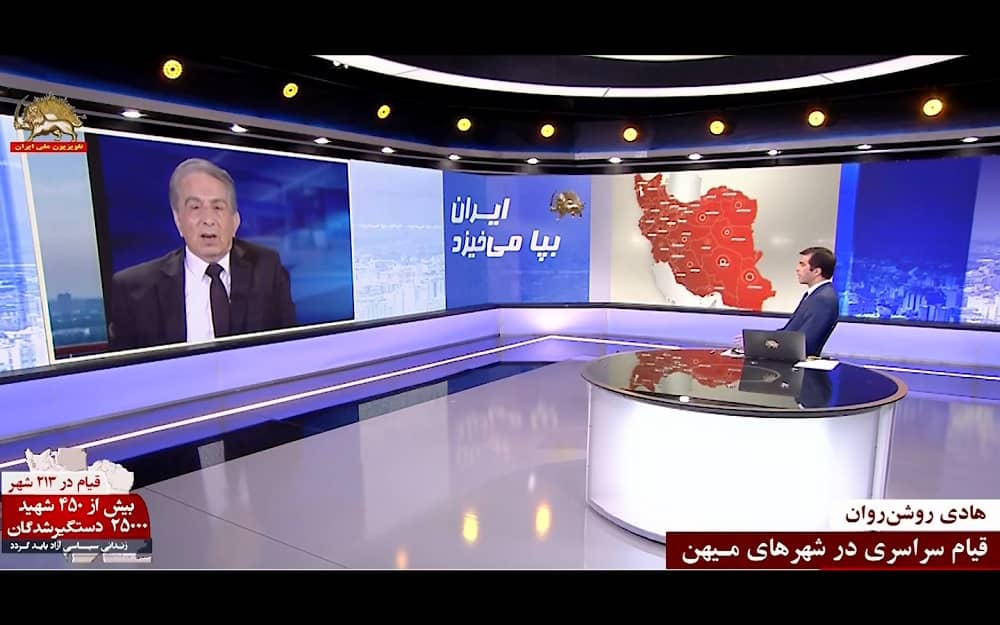 On Monday, October 31, Simay Azadi, the Iranian Resistance’s main television network conducted an interview with Mr. Hadi Roshanravan from the Security and Counterterrorism Committee of the National Council of Resistance of Iran (NCRI).

Given the significance of the analysis and the insight that was shared concerning the nationwide uprising, a few excerpts of the interview have been translated for the English-speaking audience. In light of the current systemic atrocities on Iran’s streets, particularly in the Iranian Kurdistan region, these words are making a lot more sense.

Host: Mr. Roshanravan, some of the regime’s senior officials have taken a stance concerning the protests. They argued that the state should talk with the dissidents in some way or the other… But there is another faction in this regime that is more aggressive and is calling for a brutal crackdown. How do you view these conflicts of interest inside the regime? How much of it is real? Are there two different positions within the regime? In your opinion, what does Khamenei think about any of this?

Roshanravan: So far, the regime has already exploited all available methods to suppress the uprising. In this regime, repression has five stages. The first one is prevention. That means they arrest those they suspect of initiating the protests. Once they find out about the source, they focus on it and neutralize it.

As next comes terror. That means intimidating the public and preventing protests. Either with tear gas, water cannon or even beating the people.

Third, comes what they call “people’s involvement”. They mobilize the repressive Plain-clothes Basij forces and those close to the regime and claim the public is against these movements.

Fourth is using nonlethal weaponry like cracking down with bird shots and pellet guns.

The next step is called “the shock” stage. Like what they did to Zahedan. They conducted a massacre and killed the people. This way, they want to terrify society, hoping to prevent the uprising from escalating.

But so far, all stages have failed. The regime has taken all steps under the supervision of nobody other than the IRGC. When we’re talking about the police or the Basij, they have run the operations under the IRGC command. Even the plainclothes agents. But tactic-wise, they utilized police gear or plain clothes on the field. You didn’t observe IRGC uniforms, but they did use the entire suppression capacity of the regime. But they failed, nonetheless. Because they were faced with courageous and forceful resistance that was operating in an organizational fashion and didn’t allow the movement to slow down.

Watch and judge state officials' remarks about the 'defection crisis' the #Iranian regime is dealing with amidst #IranRevolution2022 pic.twitter.com/Q1D8GE0jD3

Instead of backing down when they were attacked, they started to fight the enemy quite daringly. On the 19th day of the uprising, the regime’s Police Chief Hossein Ashtari announced that 1,800 of their forces are hospitalized. That makes approximately 90 individuals a day. Hence the defiance is holding back the crackdown to some extent.

Host: So, you mean that the attack of the defiant youth is a cause for the regime’s failure?

Roshanravan: That’s exactly right. It’s those organized iconoclastic actions. Everything started with the slogan of “death to Khamenei” and it didn’t stop. This time, nobody is even chanting slogans against Ebrahim Raisi. They started by calling for regime change right away. They targeted the head of the state. And then it’s the coordination among different cities. Also, take into account the youth and the very movements who are doing organized work. That’s a fact and the regime is quite terrified.

Host: I’d like to know how this is playing out on the forces on the ground. Those who must enforce the orders. How are they affected by the developments?

Roshanravan: I think defections among the regime’s ranks is a very serious issue here. These forces must be kept on the field continuously. Tehran’s governor admitted that the security forces haven’t slept for several nights. That means they are exhausted. Second, these people are not totally separated from society. They have kids and neighbors. When they are back home, they are faced with the problems that stem from the current situation and they have no reason to continue their job other than the threat that their salaries might be cut.

When their own offspring get involved in similar activities at school, then their own children will start to disobey, and their neighbors will have a different view of them. That means that a lot of these forces might want to leave their jobs. So, you have to add the social effect to the exhaustion issue.

For instance, we saw footage that showed a mother of a security agent who came forward, took her son by the collar, and pulled him away. All those commanders and fellow soldiers were just watching, and no one could say a thing. That’s a clear indication of serious defection among the lower ranks.

Then you also have the rift among the higher ranks who argue that the approach so far didn’t work. On September 22, there was a meeting at the regime’s Supreme Security Council where state officials wanted to decide about carrying out a massacre. IRGC commanders and leaders of the provincial security forces stated that they don’t have the manpower to execute that endeavor and they failed to make such a decision after three sessions.

Host: When did this meeting find the place?

Roshanravan: It was the third week of the uprising. If you take notice, that shows that the regime didn’t hold itself back. As far as Khamenei is concerned, he is determined to crack down, but he hasn’t resorted to it yet.

Host: But that’s what he’s opting for, right?

Roshanravan: Yes because he believes that backing down means falling down. But he’s constantly faced with people, both at the highest and the lowest levels, who can’t take it anymore. That’s why he is stuck in a deadlock. And this has been an advantage for the uprising.

The defiance of the youth on the field has led all the regime’s initiatives to failure. This bravery and steadfastness have failed the regime’s plans and the regime has no way out. Neither forward nor backward. Khamenei must give major concessions and accept to let go of his entire establishment. Because, as far as negotiations are concerned, who do you want to talk with? The protesters have no one you can talk to.

Host: And their demands are not negotiable.

Roshanravan: Yes, they are calling for him to leave power. And Khamenei doesn’t want to leave. This is the situation where we’re in.

Simay Azadi is the first and oldest Persian language satellite TV channel that broadcasts 24/7 content for Iranians at home and abroad.

Recent interviews from Mr. Roshanravan on Simay Azadi, can be found here: