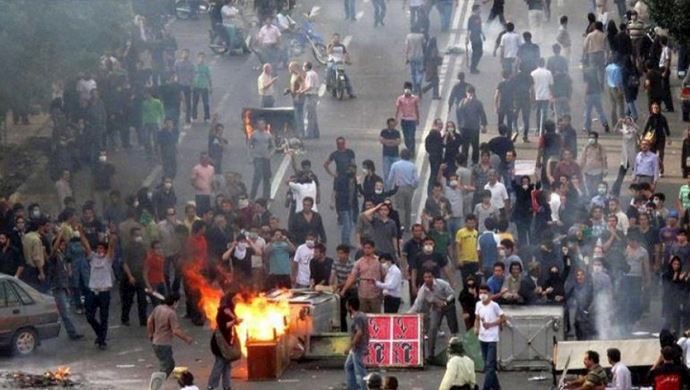 Today, Saturday, March 20, 2021, marks the Iranian New Year, Nowruz. Seeing as the coronavirus outbreak reached truly global proportions last March, it is safe to say that the year 1399 on the Persian calendar was even more completely defined by the pandemic than the year 2020 on the Western calendar.

For citizens of Iran, this isn’t just about the suffering the pandemic caused but also the trends that it interrupted. For more than two years before the first domestic cases of Covid-19 were registered, the country had been the site of more or less continuous unrest led by activist groups that openly advocate for the overthrow of the theocratic dictatorship.

The first such protests began in December 2017 and lasted through much of the following month, spreading to well over 100 cities and towns along the way. Iran’s regime Supreme Leader Ali Khamenei acknowledged in a January 2018 speech that the leading pro-democracy opposition group, the People’s Mojahedin Organization of Iran (PMOI-MEK), had “planned for months” to facilitate the uprising. Authorities responded with brutal repressive measures, killing dozens of protesters and systematically jailing thousands of known and suspected activists.

Those demonstrations helped to keep the slogans from the previous uprising in mainstream circulation. This, in turn, set the stage for them to return to national prominence in November 2019, when the regime’s announcement of gasoline price hikes sparked renewed outrage among a population that had already been driven into deep and widespread poverty. Viewing the announcement as a clear sign of the regime’s self-interest and disregard for its people’s essential needs, citizens of nearly 200 cities and towns took to the streets in order to once again call for the removal of the existing government in its entirety.

That message was conveyed in November 2019, as it had been in January 2018, through chants that included “death to the dictator” and “death to Rouhani,” in reference to the hardline supreme leader and the so-called reformist president, respectively. The protest movement also took clear aim at those factions in their entirety, rejecting the notion that there are meaningful political differences between them and that either faction is motivated to improve the wellbeing of ordinary Iranians. Participants called out to both factions by name and told them “the game is over,” thereby evoking a vision of the clerical regime’s downfall.

Rejection of both factions had been used previously, with varying degrees of success, in electoral boycotts, including a boycott of Hassan Rouhani’s reelection bid in 2017. But this movement really gained momentum in the wake of the nationwide uprisings, when government authorities desperately insisted upon full participation in February 2019’s parliamentary elections. The regime wanted to use that election to reassert its own legitimacy but instead ended up struggling to explain away the lowest voter turnout in the history of the Iranian regime. The people were not keen on contributing to that illusion in the wake of some of the worst repression the country had seen in many years.

While repression of the January 2018 uprising may have helped to fuel the ensuing “year full of uprisings,” that repression was magnified at least 25 times by the regime’s response to the nationwide protest in the following year. The November 2019 uprising lasted only several days before its participants scattered in the face of incessant gunfire from security forces and the Islamic Revolutionary Guard Corps (IRGC). Amnesty International issued a report in the wake of the unrest which confirmed that the IRGC had been shooting to kill, and a later report noted that months of torture had awaited many of the thousands of individuals who were arrested during the uprising.

The National Council of Resistance of Iran (NCRI) collected official records and eyewitness reports from the frontlines of the protest and determined that over 1,500 peaceful activists and innocent bystanders had been killed in mass shooting incidents around the country. The same findings revealed that at least 12,000 arrests were carried out during the uprising, making it all but certain that the death toll would grow as activists were subjected to torture, denied medical treatment, and tried for vaguely-defined capital offenses.

It might have been reasonable to believe that the scale of this repression, in connection with a lack of official support from major world powers, would cause the popular unrest to diminish greatly before the end of 2019. But this turned out not to be the case. Less than two months after November’s mass killings, the Iranians were back out in force across more than a dozen provinces, protesting a missile strike and subsequent cover-up involving the destruction of Ukraine International Airlines Flight 752.

The January 2020 protests took explicit aim at the IRGC for having been the source of that missile strike. In so doing, they showed remarkable defiance of the very same hardline paramilitary that had killed and grievously injured so many people during the prior unrest. Some participants even burned public images of Qassem Soleimani, the commander of the IRGC’s foreign special operations wing, the Quds Force, who had been tirelessly lionized by state media after he was killed at the beginning of that month in a US drone strike.

With the last of their two-year series of uprisings, the Iranian people seemed to send the message that no amount of government repression could slow the escalation of their push for change. As it turned out, the only thing that could do that was a global pandemic which brought normal activities to a grinding halt in countries throughout the world. The regime’s Supreme Leader Khamenei presumably had this in mind when he delivered a speech that downplayed the severity of Iran’s coronavirus outbreak but also proclaimed that the crisis would turn out to be a “blessing” for the Iranian regime.

The regime’s embrace of that blessing came at a shockingly high cost for average Iranians. While the government’s Health Ministry reports that about 60,000 people have died of Covid-19 in the country, the NCRI had stated that this reflects a trend of under-reporting that began even before the first Iranian cases were formally acknowledged. According to independent assessments of hospital and morgue records and other sources, the actual death toll is fast approaching a quarter of a million. Meanwhile, authorities are still doing very little to address the crisis, and Khamenei has even banned imports of vaccines made in the US and the UK.

It should go without saying that this has left the Iranian people, at the end of the Persian calendar year, with even more reasons to push for the overthrow of the ruling system.

As the Iranian regime adopted the mass casualty strategy of the pandemic in the past year, the MEK’s Resistance Units took the opposite path. They continued their activities despite all the hardships and didn’t allow the regime to quell the society. In keeping the flame of resistance burning, they became the beacon of hope for people, which is why even the protests across Iran were continuous.

And in light of recent protests, including mass uprisings in Sistan and Baluchistan Province, where fuel porters came under fire from the IRGC, it looks more and more like the country is primed for a resurgence of the previous years’ unrest very soon after Nowruz. As part of an online event marking that occasion with messages of support from US Senators, the NCRI’s President-elect, Maryam Rajavi described the recent demonstrations as evidence that “the fire of the uprisings has risen from under the ashes of the coronavirus.”