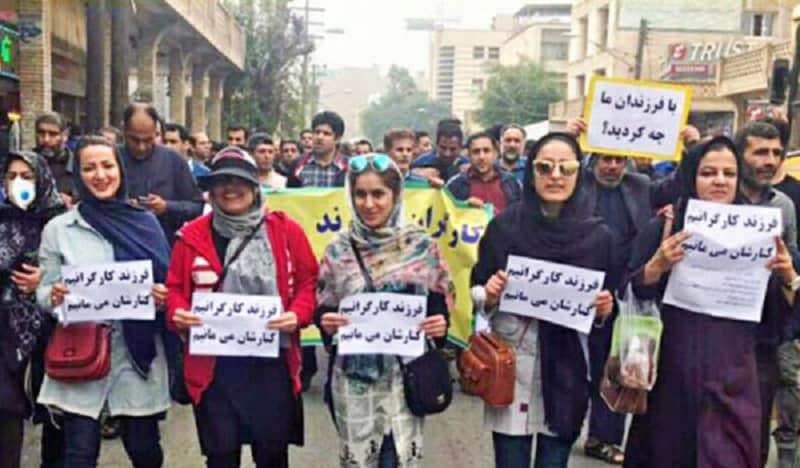 This weekend, Iranians in Iran and throughout the world are celebrating Nowruz and marking the start of the year 1400 on the Persian calendar. The traditionally cheerful occasion will undoubtedly be viewed as an opportunity for positive transition, especially in the wake of the awful suffering and loss of life caused by the coronavirus pandemic.

For many Iranians, that hardship was compounded by the fact that they had suffered some of the worst repression at the hands of the regime in the two years preceding the domestic outbreak of Covid-19. And unfortunately, neither of those trends is yet at an end. Iran’s public health crisis is almost guaranteed to carry on in the face of nonexistent government interventions and an inexplicable ban on importing American and British vaccines. And government backlash against public activism was put on display once again this month as the Islamic Revolutionary Guard Corps (IRGC) opened fire on fuel porters and local residents in Sistan and Baluchistan Province, killing several and sparking fresh clashes with authorities.

Somewhat ironically, those same clashes are actually very likely to contribute positively to the Iranian people’s outlook on Nowruz. After a year of struggling to cope with the coronavirus, such incidents help to demonstrate that the country has not lost the gains it made over the previous two years. From December 2017 until January 2020, Iran underwent at least three nationwide uprisings, with countless localized protests linking them together along the way. By all accounts, the unrest would have continued well into 2020 and perhaps to the present day if not for the fact that the pandemic forced many people inside, often for months at a time.

On Wednesday, in a speech as part of a Nowruz event which also featured a number of current and former US Senators, the Iranian Resistance Leader Maryam Rajavi described the largest of the uprisings, in November 2019, as having “brought the regime to the brink of its downfall.” It would surely be disheartening for the organizers of that nearly 200-city protest to conclude that Tehran had recovered in the interim and that they would have to start from scratch in their efforts to establish a new system of government.

Mrs. Rajavi went on to say that the activist community and the Iranian people as a whole were poised for resurgent unrest, with which they could capitalize on a state of vulnerability that has really not diminished in Tehran since a year and a half ago. If anything, the coronavirus pandemic has caused that vulnerability to grow in that it has exposed ordinary citizens to yet another source of outrage over their government’s rampant mismanagement of vital domestic affairs.

Since they initially confirmed active Iranian cases in February of last year, Iranian authorities have done little other than deny the seriousness of the situation, even going so far as to ignore the first round of deaths and maintain a dramatic underestimate of the death toll from that point forward. There was a clear reason for this, apart from the simple desire to promote a false image of the Iranian regime’s invulnerability.

As documents obtained by the People’s Mojahedin Organization of Iran (PMOI-MEK) have confirmed, coronavirus infection was already active in the country more than a month before the first public statement on the topic, and during that time authorities had actively encouraged and facilitated public gatherings to celebrate the regime’s anniversary and participate in sham parliamentary elections. These decisions made Tehran directly responsible for the early severity of the outbreak, which ultimately secured Iran’s status as the worst-hit country in the region.

That status is corroborated by the Iranian Health Ministry’s own estimates, including a current death toll of around 60,000. But the MEK has provided its own reports on the situation, drawing upon hospital and morgue records as well as eyewitness testimony from affected citizens and medical professionals. The latest update to those reports indicates that the current death toll is somewhere in the vicinity of 250,000, or roughly four times the government’s official estimate. 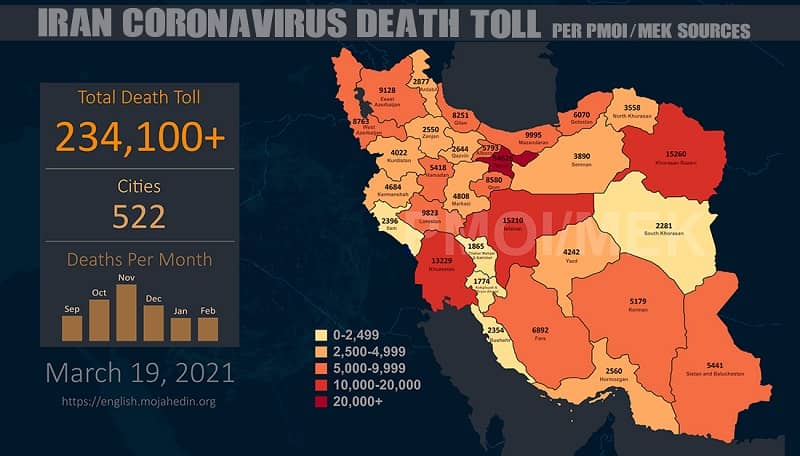 Since the outbreak of the Pandemic in Iran, the regime pursued a mass casualties’ strategy, hoping to suppress the uprisings that had taken place in Iran over the past few years and to disappoint the people. However, the MEK and their Resistance Units, despite the difficult conditions due to the pandemic, not only did not stop their activities but became more active in all cities of Iran. Those activities boosted the people’s morale and kept the spirit of resistance alive, so people from all walks of life continued their protests. Through their activities, the MEK Resistance Units sent a message to the people that they should not surrender to the regime, and even to eradicate the coronavirus, they must fight the mullahs’ virus.

The message of that defiance has been strongly reinforced by the recent unrest in Sistan and Baluchistan, as well as various other protests that have emerged in spite of the persistent threat from both Covid-19 and regime authorities. It is safe to assume that when one of those threats has diminished, the Iranian people and the organized Resistance movement will not be seriously deterred by the other.

This was made clear by Maryam Rajavi and by her supporters in the recent Nowruz video conference. After calling particular attention to Sistan and Baluchistan, the Resistance leader urged Iranian activists and expatriates to be confident that “the fire of the uprisings has risen from under the ashes of the coronavirus.” But she also addressed Western policymakers in order to emphasize that there is still much to be done in order to secure the triumph of those uprisings and that the international community could play a key role in smoothing the transition from recent hardship to a future hope.

“Any concessions to this regime or silence on its threats,” she said, “will only embolden it” to pursue more of the same malign activities, including but not limited to mass killings and torture of domestic activists. The event made it clear that the National Council of Resistance of Iran believes that the sanctions against the regime must remain in place or be expanded in order to help protesters achieve their ultimate goal of removing the theocratic dictatorship and establish a democratic system in its place.