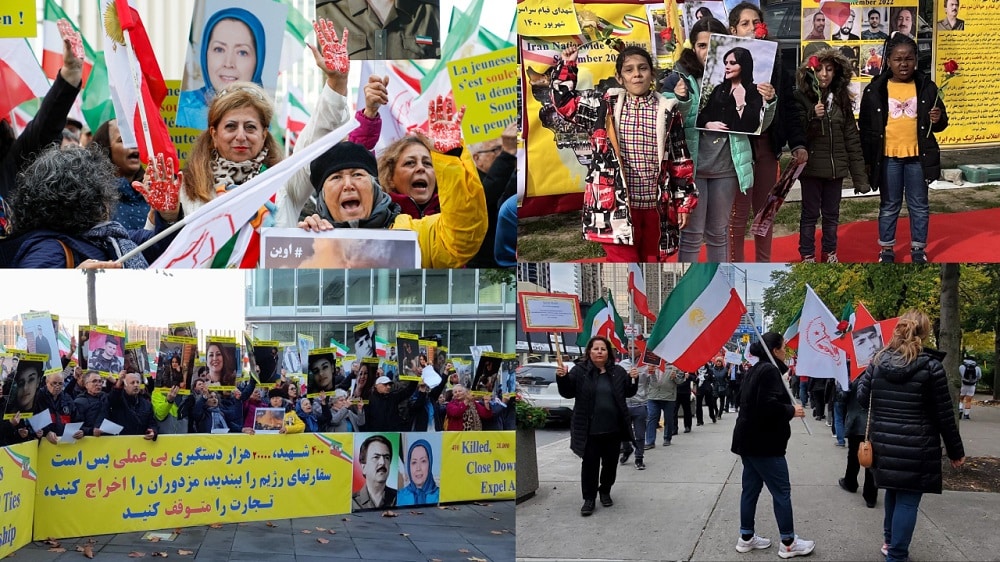 On October 17, while European Union foreign ministers met in Luxembourg to announce new sanctions against the regime in Iran, supporters of the National Council of Resistance of Iran (NCRI) and the People’s Mojahedin Organization of Iran (PMOI/MEK) held a rally at Place de l’Europe to voice support for the popular uprising inside Iran.

The protesters called on the EU ministers to support the Iranian people’s demand to adopt a firm policy towards Tehran and recognize their right for overthrowing the religious dictatorship.

In a message to the Iranians in Luxembourg, NCRI President-elect Mrs. Maryam Rajavi said: “Let us salute the prisoners whose cries of ‘Death to the dictator’ crossed the thick walls of Evin to join the chants of their fellow compatriots all over Iran.”

“Let us salute the prisoners whose endurance and resistance in the face of the IRGC’s barbaric attack at Evin have given new momentum to the uprising. They showed that Evin remains a bastion of struggle and resistance as it has been for the past fifty-some years.”

“For 40 years, Iranian women were flogged and humiliated. Their rights and freedoms were trampled, and tens of thousands of vanguard women from the PMOI/MEK were tortured and executed. Now, they have risen up not only to liberate themselves but also to liberate the whole of Iran.”

Let us salute the prisoners whose cries of “Death to the dictator” crossed the thick walls of #Evin to join the chants of their fellow compatriots all over #Iran.https://t.co/9K6pU0NMpY

“We call on the United Nations and all governments, especially the European Union, whose Council of Ministers met today in Luxembourg, to take concrete, practical steps to stop the arrests and killings of Iranian protesters:

1- Designate the entire IRGC and the Ministry of Intelligence as terrorist entities, expel their agents and operatives, and revoke their passports;

2- Recognize the Iranian people’s right to self-defense vis-a-vis the crimes of the mullahs’ regime; recognize their right to struggle to overthrow the religious dictatorship and establish democracy and human rights;

3- Take urgent measures to free all political prisoners and prevent further executions and killings, imposing comprehensive sanctions on the regime, severing all economic and diplomatic relations with Tehran, and closing down the regime’s embassies;

4- Refer to the UN Security Council, the clerical regime’s dossier of four decades of genocide and crimes against humanity, including the 1988 and 2019 massacres, and bring the regime’s leaders, including Khamenei and Raisi, to justice.”

Monday’s protest in Luxembourg was also attended by a number of lawmakers and locally elected officials. MP Roy Reding from Luxembourg’s ARD party addressed the rally and expressed his support for the Iranian people’s democratic revolution and their organized resistance.

The protesters at the Luxembourg protests voiced their support for Mrs. Rajavi’s call. They asked EU governments to recognize the right of protesters in Iran to defend themselves and overthrow the ruling dictatorship.

They also urged the EU member states to summon their ambassadors from Iran, predicate all diplomatic relations with the regime to halt repressive measures against the protesters, and release all those arrested during the uprising. They also called on European countries to take the necessary steps to ensure that the Iranian people enjoy unhindered access to the Internet.