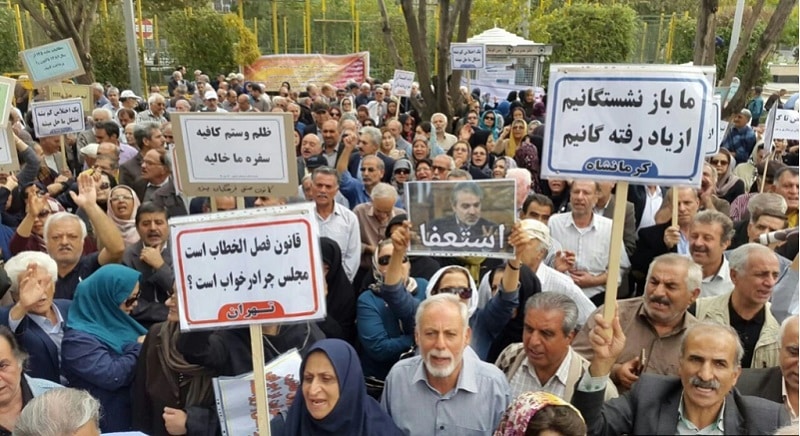 On Sunday, retirees and pensioners of Iran’s social security organization held rallies across the country, protesting their poor economic conditions and chanting slogans against the regime. These rallies marked the 9th nationwide protest by Iranian pensioners in the last three months and the first in the new Persian Year of 1400. Pensioners held their protests on Sunday, despite the heavy atmosphere of repression in Iran. The regime had tried to intimidate protesters and prevent them from joining these protests, but it failed.

The pensioners’ protests and slogans are signs of the society’s condensed hatred toward the regime and its corrupted apparatus. The regime’s officials and state-run media have acknowledged the society’s explosive state and people’s economic grievances. “The inflation burns people to their core,” said Abbas Akhundi, the regime’s former minister of Urban and Roads Developments, on Sunday.

“People’s tables continue to shrink daily. If we do not find a solution, great damage will await us. The feeling of oppression among the people who lost their [life savings in] stock market, [people’s anger of] incidents, [such as] the fuel-price hike incident [November 2019 uprising], the rampant inflation, the long ques for oil and poultry, cannot be ignored. People will react at the right time,” said Ahmad Alireza Beigy, one of the regime’s MPs, on Sunday.

“The truth is the inflation in the country has increased by 35% within the last year, and the prices of most products people need have tripled,” wrote the state-run Arman daily on Saturday, adding, “In the current situation, workers are living in inadequate economic conditions. Many shop owners have a customer downturn.”

“On the other hand, unemployment is increasing daily in society. The situation is such that private companies are either partially closed or forced to fire their employees.” Arman writes, concluding, “As a result, the recent rise in prices has infuriated people, and society is on the verge of a population explosion. If this doesn’t happen now, it will happen soon”.

Protests by all walks of life in Iran reemerged in the winter of 2021, after a year of people’s battle with the ongoing Covid-19 outbreak. These daily protests demonstrate that the regime, with all its oppressive forces, cannot oppress protests because this will further enrage people and deepen their hatred toward the regime. On the other hand, if the regime does not respond, these protests will spread across Iran, which reminds the regime of the November 2019 uprising, which rattled the regime’s foundations.