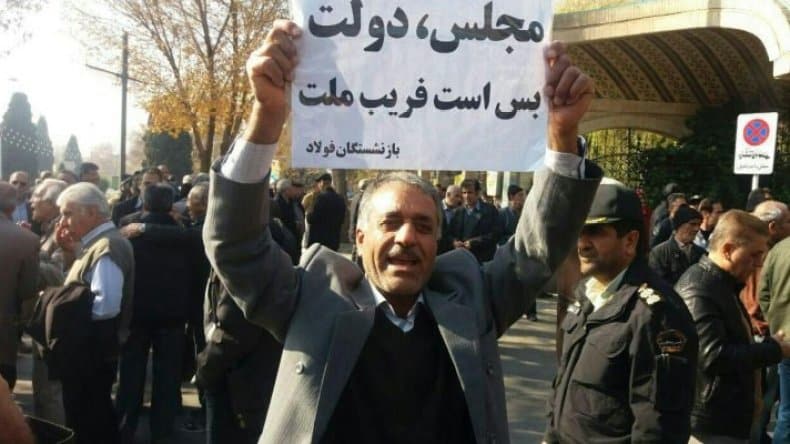 As economic problems deepen in Iran, protests from all walks of life continue across the country. Iranians consider the regime’s wrong policies and corruption as the real reason for their problems.

On Sunday, retirees and pensioners of Iran’s Social Security Organization held their nationwide rallies, protesting harsh living conditions, the regime’s inaction to solve their problems, and called for boycotting the mullahs’ sham presidential elections. Retirees held their protests despite the regime’s attempts to intimidate them.

In Tehran, protesters marched from the Social Security Organization to the Shademan subway, chanting, “We will no longer vote because we have not seen any justice.”

On Monday, farmers in Ziar city in Isfahan province held a protest, demanding their right to water irrigation. The protesting farmers blocked the road by using their vehicles and setting fire to tires.

On Monday, a group of university graduate teachers held a protest in Karaj, near Tehran, demoing equal pay and rights. The regime security forces arrested a lady who spoke at this rally but was forced to release her after 24 hours.

These ongoing protests show the Iranian society’s restiveness. The state-run Mostaghel daily on Sunday admitted that society’s current explosive state “has reached a certain point of difficulties that speaking of it agitates the officials.”