Written by Shamsi Saadati
8th May 2021 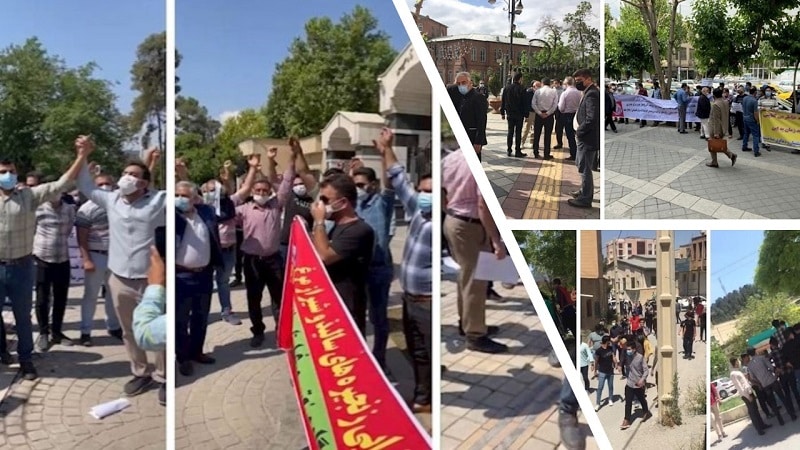 According to reports tallies by the People’s Mojahedin Organization of Iran (PMOI/MEK), as Iran’s economic and social crises deepen, more protests are held across the country.

On Saturday, May 8, high school students held a rally in Nasim Shahr district of Tehran protesting the in-person tests as the Covid-19 crisis continues taking up to a thousand lives a day in Iran.

Iranian students started their protests on Tuesday in numerous cities across Iran against taking in-person exams instead of online, given the Coronavirus pandemic.

On Wednesday, according to the Iranian Resistance, in several cities, the regime’s suppressive forces attacked the students with batons and pepper spray and confiscated their cell phones. In Yazd and Shahrekord, several students were arrested.

While other countries are reaching their goal of general vaccination, the regime has delayed the vaccination process and refuses to issue lockdown. Meanwhile, Iran is going through the fourth wave of the coronavirus pandemic. Holding examinations, refusing to procure certified vaccines, and forcing people to work, are part of the regime’s inhumane Covid-19 policy to control the restive society.

But the ongoing protests in Iran show the regime’s policy has so far failed.

On Thursday morning, the plundered investors of the stock exchange held a protest rally in Tehran. Fearing this protest could spread, the regime’s repressive forces attacked them and arrested two.

Millions of Iranians lost their life savings in Iran’s stock exchange crises due to the regime’s scheme of compensating its budget deficit by deceiving people and encouraging them to invest in the stock market.

On Saturday, the state-run Sharq daily, while admitting to the regime’s plundering, embezzlement, and economic chaos, warns the regime of social consequences as millions are Iranians are grappling with poverty.

“Policies of liberalization, privatization, deregulation, monetization, and commodification of social and economic phenomena are responsible for the country’s current economic, social, cultural, and political crises after the war,” Sharq wrote.

Sharq warned regime officials that “The contribution of the devaluation of the national currency as the most important macroeconomic destabilization, stagflation, widespread unemployment, unprecedented socio-economic inequalities; officials’ astronomical wealth; Unprecedented corruption in the administrative, cultural and social context; Continuous weakening of the purchasing power of the people and the livelihood crisis of a large population of society; Social harms including the spread of opium addiction; The growth of crime; Violence and suicide rate, and prostitution, the rising number of labor children, brain drain are threats to the socio-political security.”